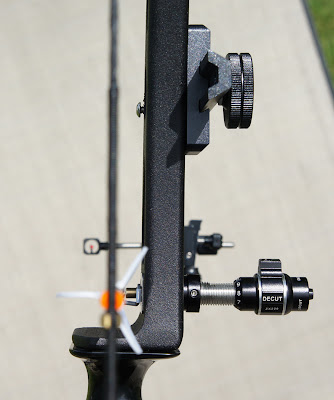 I spent some time flinging arrows off the shelf instinctively with my Hoyt recurve while the string stretched out.  I had to unstring and add twists to the bowstring numerous times over the past week to keep the brace height at about 8 inches.  Since then the brace has stabilized I have moved on the next stage of the bow tuning process.  This weekend I installed a target bowsight, magnetic flipper rest and an adjustable plunger.
Other than a short period shooting an early 1990's round wheel compound bow I've spent the last 15 years shooting traditional recurves and primitive longbows exclusively without sights of any kind.  While this instinctive archery is cool and fun it requires nearly daily practice to really become an expert shot.  Because of all my other hobbies and not to mention a full time job I was not willing or able to devote the time necessary to become proficient as I would like.  This knowledge along with my desire to get away from heavy draw weight hunting bows is what led me the target archery.
It didn't take long at all for the accuracy potential of my new Hoyt recurve to make itself known just shooting barebow.  Once I had the bowsight installed and dialed in my groups went from gigantic foot and a half spreads to 6 inch groups at 20 yards (60 feet).  Up close say 5 to 10 yards I can hit a bottle cap size target regularly shooting instinctive but much past 12 yards things get sketchy fast.  It's been a long time since I used any type of sighting device and I have to say that it has done wonders for my confidence and group size to be using a pin sight again. 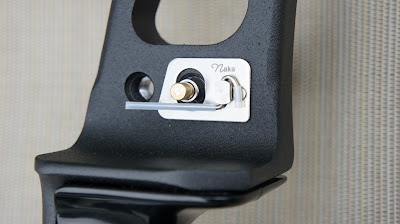 I've used flipper rests before but the riser mounted plunger is something completely new to me.  The plunger is the threaded rod with the black barrel shaped object protruding out from the lower right side of the riser in the opening picture.  I think the main purpose of the plunger is to move the shaft out away from the riser providing clearance for the feathers or vanes as the arrow leaves the bow.  The less contact the arrow has with the bow after release the better.
The plunger also provides for the fine tuning of the "launch platform" for the arrow and works in unison with the flipper rest.  The threaded rod is hollow to house the brass plunger tip and a spring to provide preload.  The plunger can be adjusted in or out to position the arrow shaft nose in or out relative to the string.  The barrel or body of the plunger can be screwed in or out to adjust the tension on the spring which acts as shock absorber to counteract flex of the arrow shaft as the transfer of energy from the bow limbs to the arrow occurs just after release. 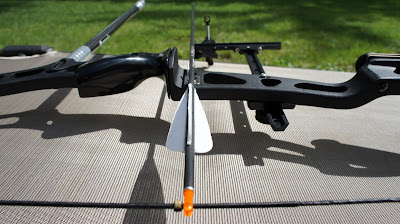 I learned just how useful of a device the plunger can be in just two shooting sessions this weekend.  While shooting off the shelf with no rest or plunger I noted that my arrows stuck out of the target butt at a perfect 90 degree angle even though when at full draw the arrow pointed slightly right relative to the string.  The perfect square angle indicates that the arrows are of a correct spine or stiffness for the draw weight of the bow.
When I installed the rest and plunger I initially set up the arrow to be pointing nearly straight ahead off the string.  After shooting a group of arrows I noted that all the nock ends were pointing slightly to the right. Consulting the Easton bow tuning guide online I learned to screw in the plunger to orient the tip of the arrow a bit left of center.  After this adjustment of only 1/16" to 3/32" off center the shot arrows were back to 90 degree penetration of the target.
The bow and arrow is a very simple device that's been around for thousands of years. The interesting part is how physics come into play and interact at the instant of release.  Add to that the marvel of modern technology and materials and the ability to tweak the equipment in such minute scale tuning the bow is almost as fun as watching the graceful arch of the arrow in flight.
Following are some pictures of groups I shot at 20 yards (18.288 meters) 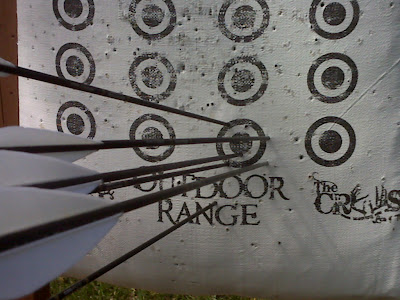 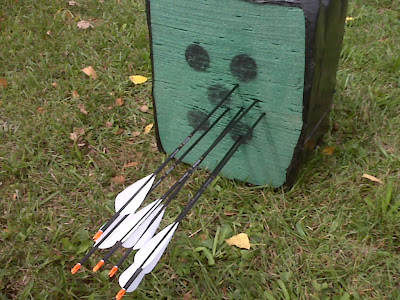 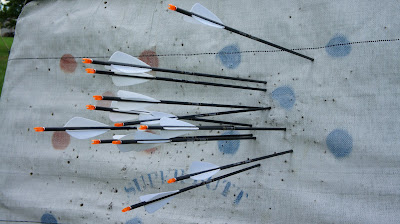