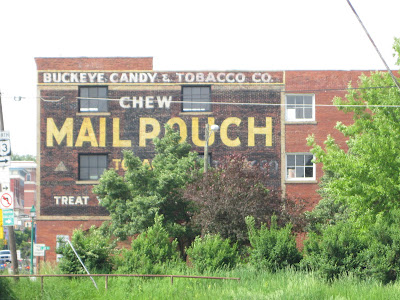 Back in January on a recumbent ride I posted a picture of a barn side Mail Pouch Tobacco add that I came across and thought a series of this old time graphic art would be a worthy addition to the blog.

This photograph I took a couple years ago in the town of Mt. Vernon, Ohio. It is the only time I've seen the logo on the side of a brick building.  I particularly like the irony in the header at the top: "Buckeye Candy & Tobacco Co."  Get some candy to rot the kiddies teeth while you enjoy a big juicy chaw of Mail pouch! 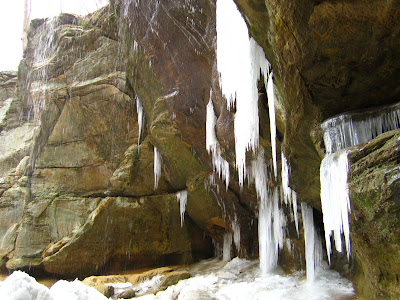 Today I met a friend at Mohican State Park for a winter hike.  Our destination was a place called Lyon's Falls.  Really the falls are just a small trickle of water that drops over the lip of a sandstone overhang but in winter the water freezes and we were treated to this amazing natural ice sculpture. 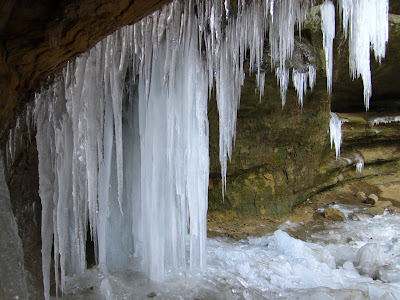 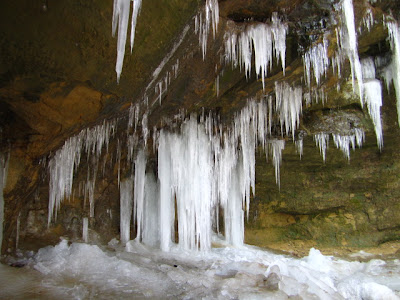 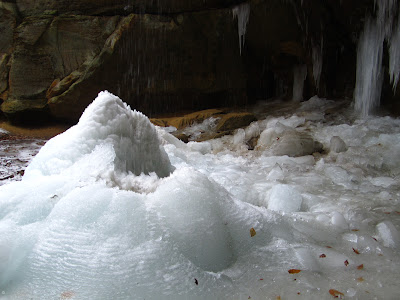 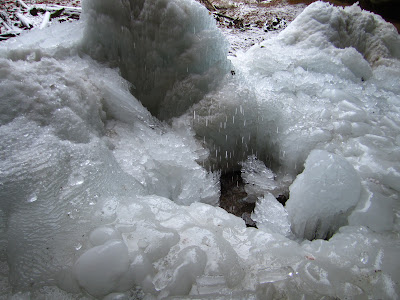 Just a ways down the trail was Little Lyon's fall. Every bit as interesting as the first.  The ice adds a stark contrast to the weathered sandstone and provides a wonderful subject for my lens. 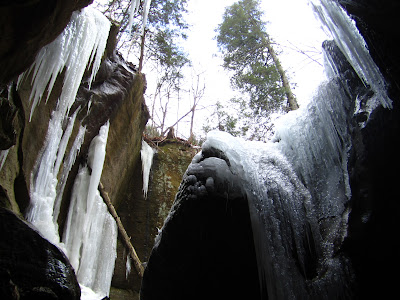 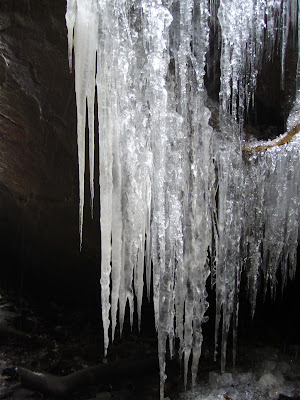 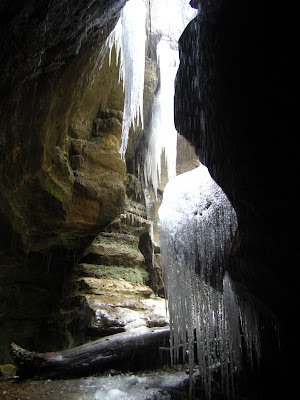 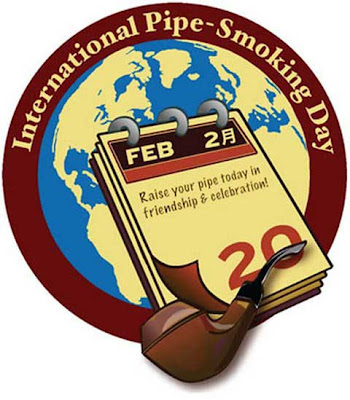 In celebration of International Pipe-Smoking Day I'll be enjoying a bowl of fine Mac Baren Vanilla Cream Flakes in this Dunhill Shell Briar. 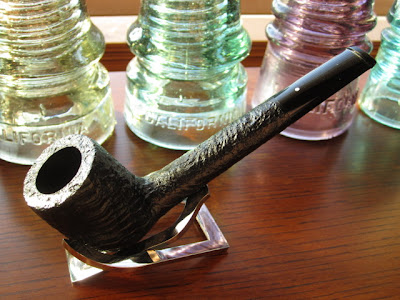 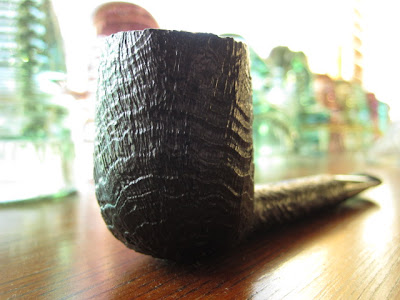 This latest addition to my small rotation sports an expertly done sandblast finish and is a classic shape known as a "Canadian".  The style is defined by a long oval shank of briar and short tapered bit. It is a group 3 size which is a medium sized tobacco chamber.  The walls of the bowl are thick and keep the pipe cool while smoking my favorite flake cut tobaccos. 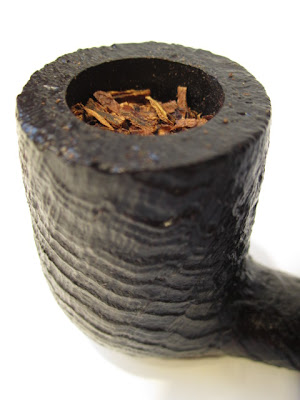 Posted by recumbent conspiracy theorist at 6:17 AM No comments: 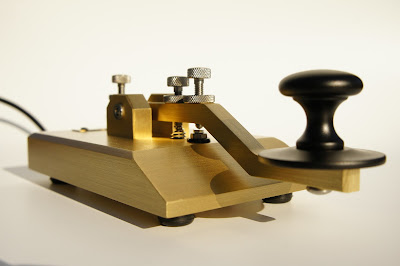 Over the weekend I got some air time participating in the SKCC Weekend Sprint and made a few contacts on HF radio.

There was a big radio teletype contest going on at the same time as our event that had the bottom end of 40 meters wall to wall with the distinctive and obnoxious sounds of teletype.  I spent most of the time in the old novice portion above 7.110 MHz where it was quiet and peaceful.  Saturday after dark I did drop down to 80 meters and made a contact at 3.5 MHz.

As usual I alternated between straight key and Vibroplex semi-automatic to send my beeps out bouncing off the ionosphere.

Last night the program at my local ham radio club meeting was "Old Time Equipment" A few of the members brought in various vintage ham gear from the past and explained the hows and whys.

I brought my Vibroplex and Code Practice Oscillator for show and tell.  While not a vintage piece of equipment the design of the Vibroplex actually predates radio so good enough for "Old Timer's Night" I thought.  I've written about the Vibroplex before on the blog. It's one of my all time favorite mechanical devices ranking right up there with the most grandest of mankind's inventions; the bicycle.

The code practice oscillator is a simple device that's been around forever and is basically just a beeper so an operator can hear his keying and practice sending the code without actually going on the air.  Modern amateur radios have a "side tone" setting that allows off air practice but back in the old days practice oscillators were a common piece of gear either purchased or in most cases home built by the aspiring CW operator. 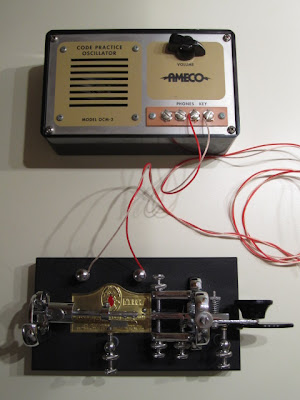 After the meeting I was down in my ham shack with my tuner parked on 7.114 MHz when I heard a CQ call loud and clear over the receiver so I sent a quick reply and was soon enjoying a nice Morse Code chat with Will in Texas.  The call sounded vaguely familiar so later I looked through my QSL cards and found Will's card he sent me in 2010 after our first radio contact back then.  Will's interest in ham radio is vintage gear and of course Morse Code and is well illustrated on his card.  I am now a full four years into the ham radio hobby and the wonder of wireless communication still thrills and amazes me to no end. 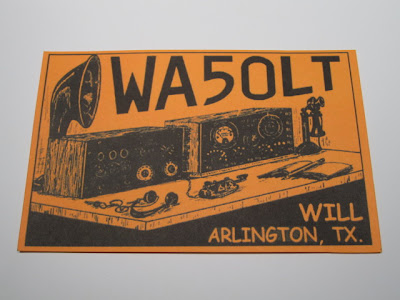 While I'm on the most interesting subject of Morse Code here's a cool video I found while reading the forums at qrz.com callsign database.  This is the greatest thing I've seen since Rush's song YYZ that combines Morse and music. 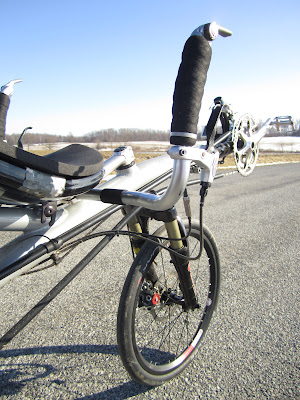 Today I got out for a couple hours on the recumbent for a ride.  It was only 30 degrees F but the sun was shining in a pale blue sky and there was no breeze to speak of so conditions were ideal.  The only way to tell that the air was moving at all was to observe wood smoke as it rose from the chimneys of rural homes and slowly drifted to the south.

The route is a long skinny loop that takes me 12 miles north through the quiet countryside of North Central Ohio.  Other than a couple small hills in and out the Sandusky River flood plain it's pretty much just flat and open country. 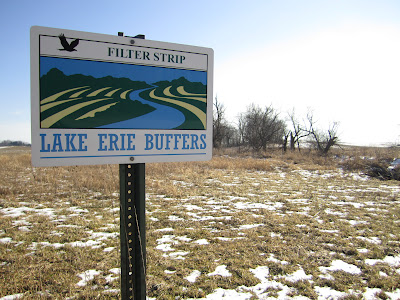 I spotted this sign along the north end of my loop. When I got home I looked it up online and learned the purpose of this conservation program whose aim is to reduce sediment pollution into Lake Erie and it's watershed. 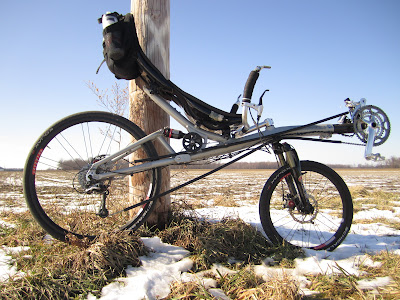 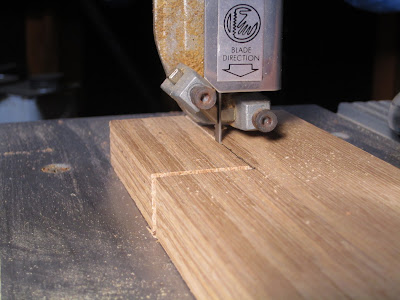 Before sub-freezing temperatures returned to the Ohio Valley I managed to complete the machining work on the replacement windowsill for my kitchen.  I got a brand new blade for my garage sale band saw and now cuts are true and precise. The shot above shows the shows the blade's path straight down the line.  These cuts out on the end of the board can't be done on the table saw without a special jig so with a slow and steady feed rate provided by me the band saw works great. 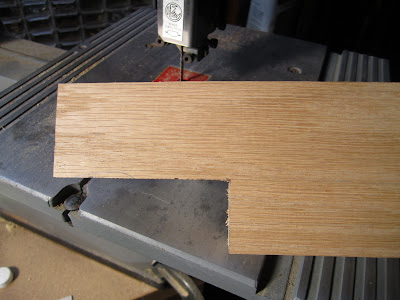 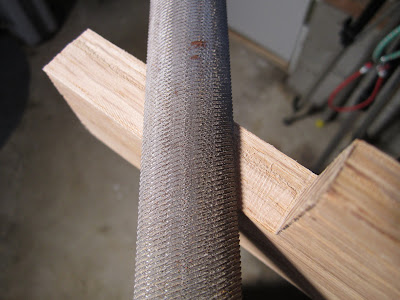 Any slight irregularities are quickly cleaned up with a file.

Oak is a very hard wood so a keen edge on all cutting tools is essential for clean accurate cuts without burns or grain tear out. 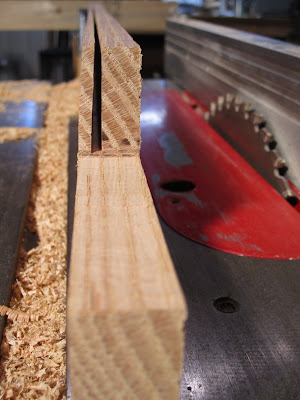 Back to the table saw to make two more cuts that remove stock from the bottom inside edge of the sill.  This hollows out a straight section that will rest on the window framing and lock it into place horizontally. 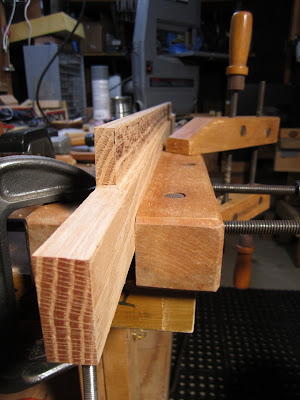 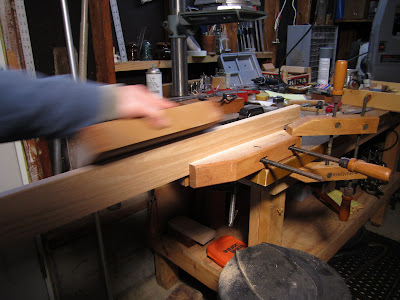 Putting a small radius on all the exposed edges of the sill was my favorite part of this project.  I do the work by hand using files, sanding block and various grades of abrasive paper. After lightly sanding the remaining surfaces I applied the first coat of polyurethane. At this point I'm just waiting for a break in the weather so I can heat up the workshop enough to continue on with the clear coating.

Posted by recumbent conspiracy theorist at 5:34 PM No comments: 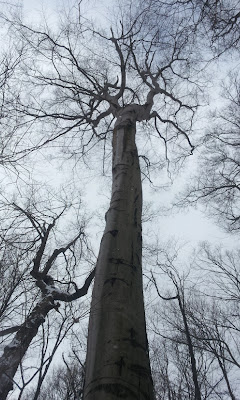 My son and I went on a winter hike today. It was a great way to spend a Sunday afternoon. We only walked about three miles but not much of it was flat ground.

We only have about two inches of fresh snow so pack boots and wool socks were just right amount of warmth and traction to keep us moving forward and enjoying our day in the woods. 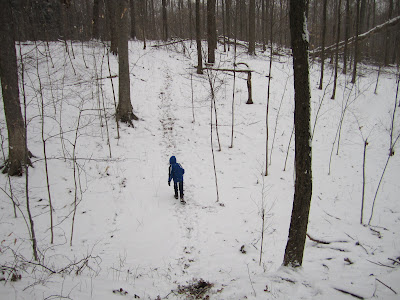 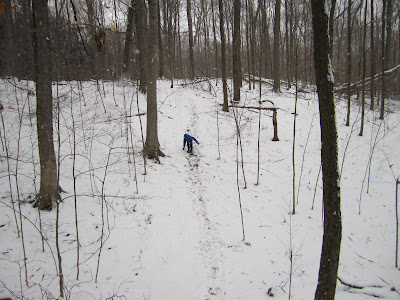 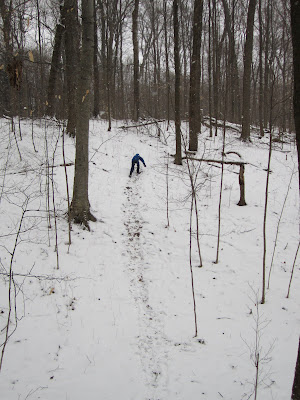 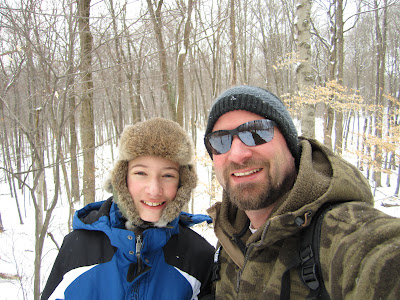