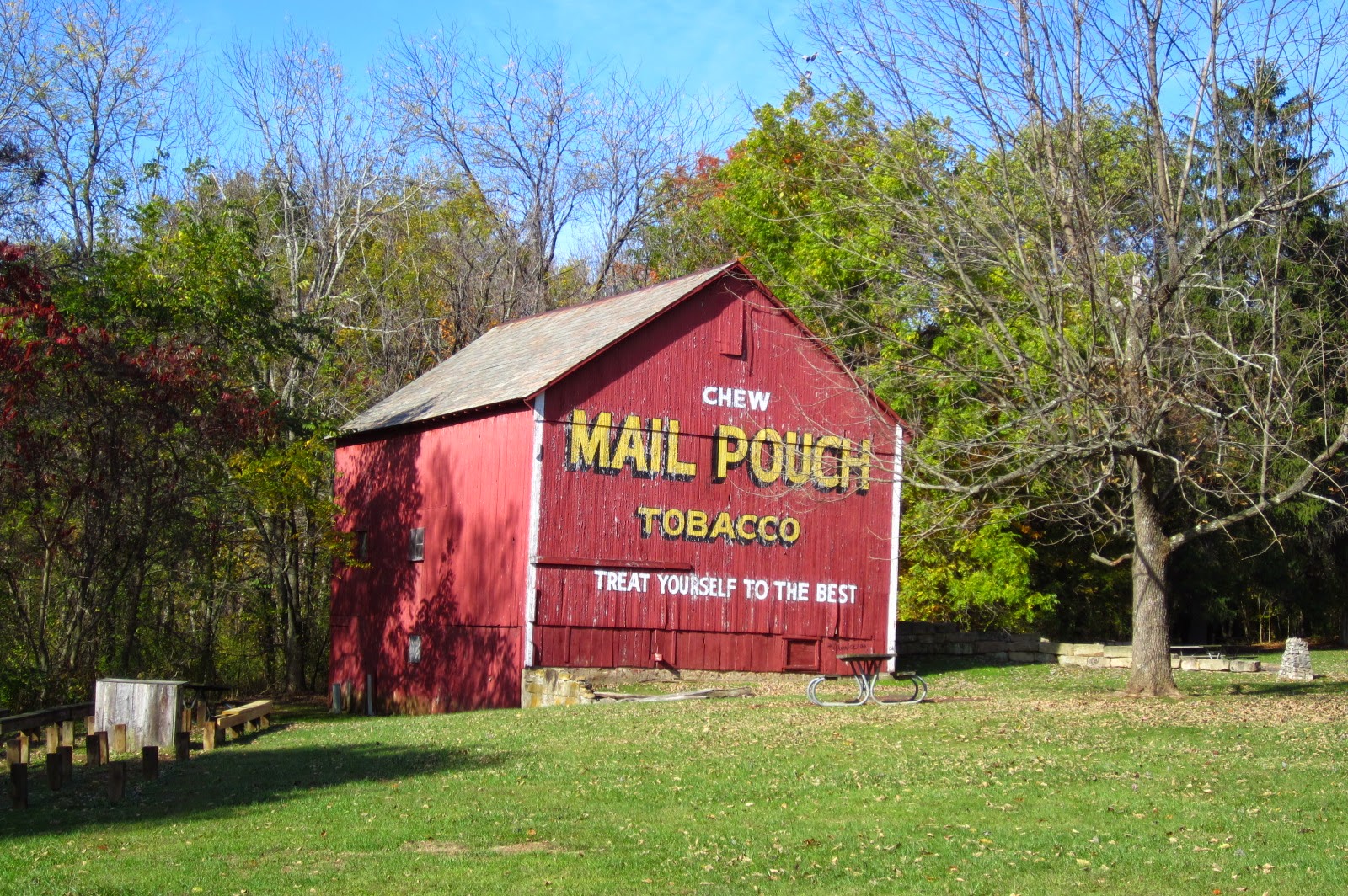 Last fall I was surprised to find this old barn standing on the grounds of  Barkcamp State Park during a trip to Dysart Woods in southeast Ohio.  The barn was originally constructed in the 1800's by Solomon Bentley who operated an orchard in the area.  Now as part of the state park the barn is used for historical displays and exhibits.

The Mail Pouch logo was first painted by Harley Warrick in the early 1980's.  Warrick was one of a handful of artists who traveled the country painting the unique signs. 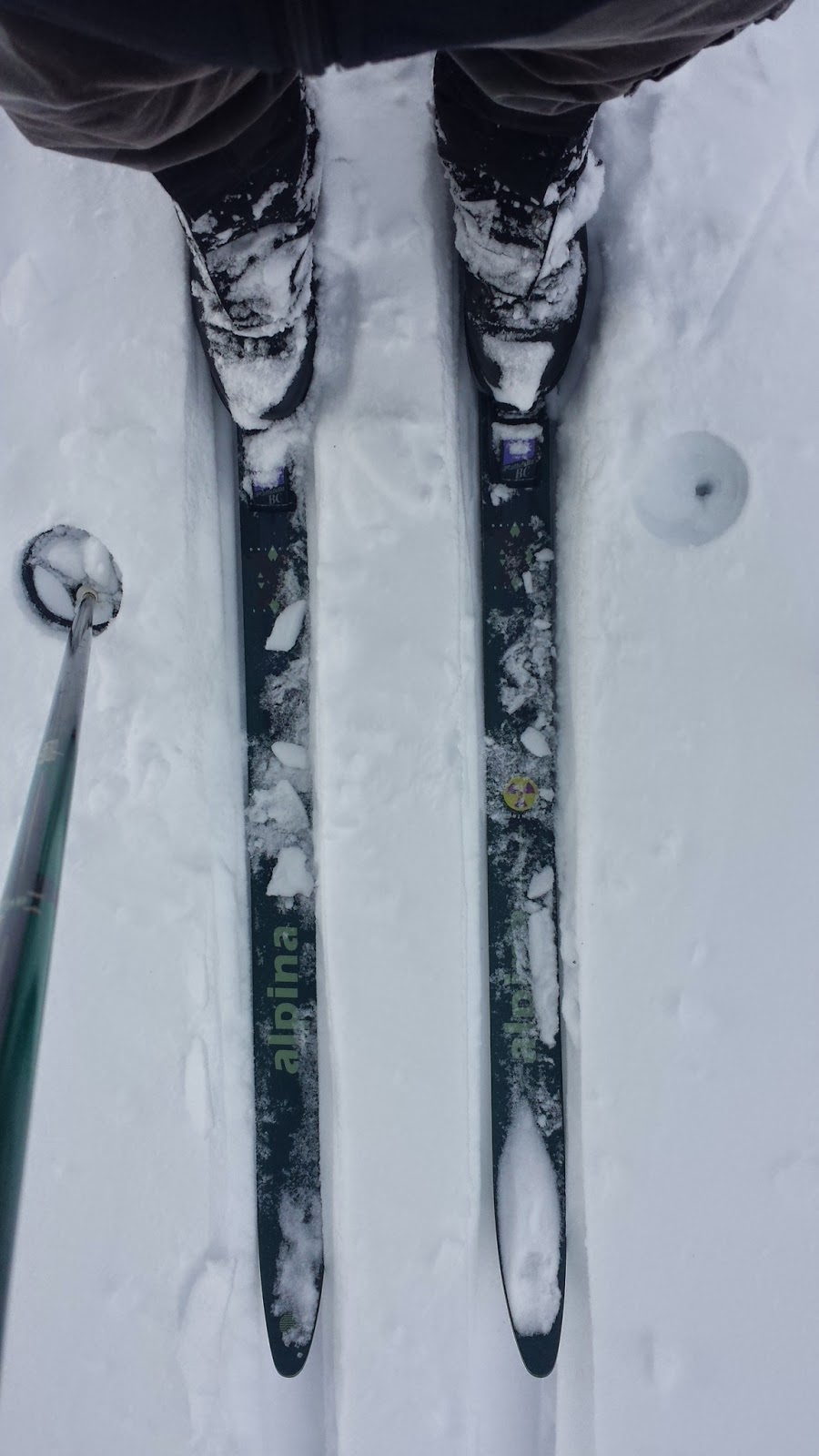 Winter has been upon us here in the Ohio Valley.  I've not been on my bike for a few weeks but I've been getting my exercise in other ways like shoveling the white stuff and doing more walking around town.  One of my favorite ways to recreate outside in the winter is on my cross country skis.  Earlier this month the wave of single digit cold temperatures keep me inside but finally things began to shape up weather wise and I've gotten out a couple times.

Today I headed out to the city park where the local high school has a one mile circuit they run cross country events during the fall season.  With a blanket of snow the loop makes a perfect course for strapping on the old boards for some Nordic style ski fun. 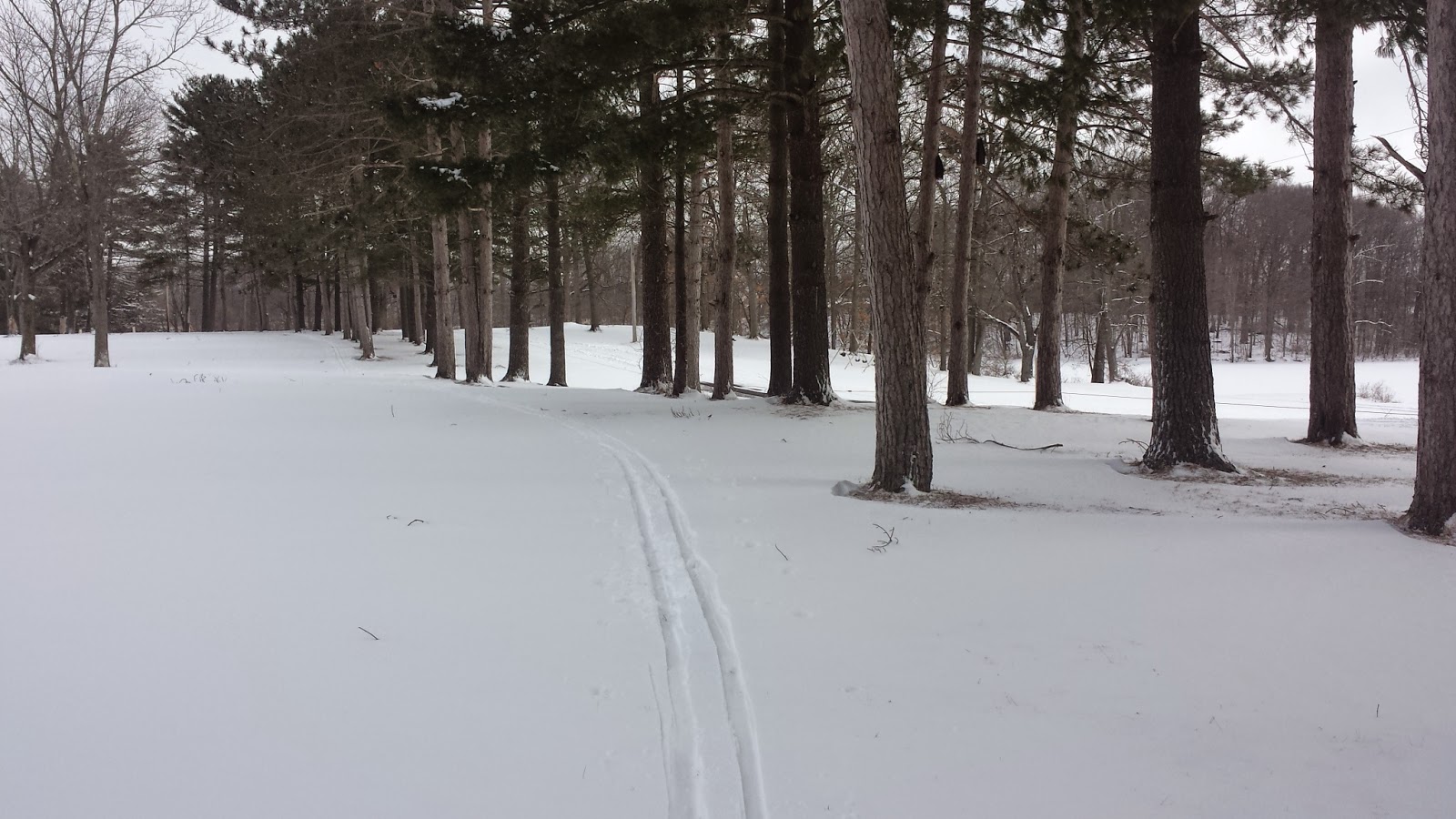 The RoadQueen turned me onto an interesting fitness tracker I've been messing with on my smart phone.  This app is called Endomundo.  What I like most about it is that is very easy for a non-savvy computer and smart phone guy like me to use.  Simply turn it on and hit go when you start; pause if you stop, and the square red stop button when you're done.

Here's what the information looks like once an adventure or workout is loaded.  All kinds of interesting statistics are recorded for later review and Google Maps is utilized to show the route:

Unfortunately the embed is not working that good with my old school Blogger template and the right edge is being cut off.  Here's the link to the page which should display the thing in proper form.

Here's a couple really good sunset pictures I took while out on my first cross country ski outing a week ago.  Being out at the gloaming in the winter is one of my favorites. 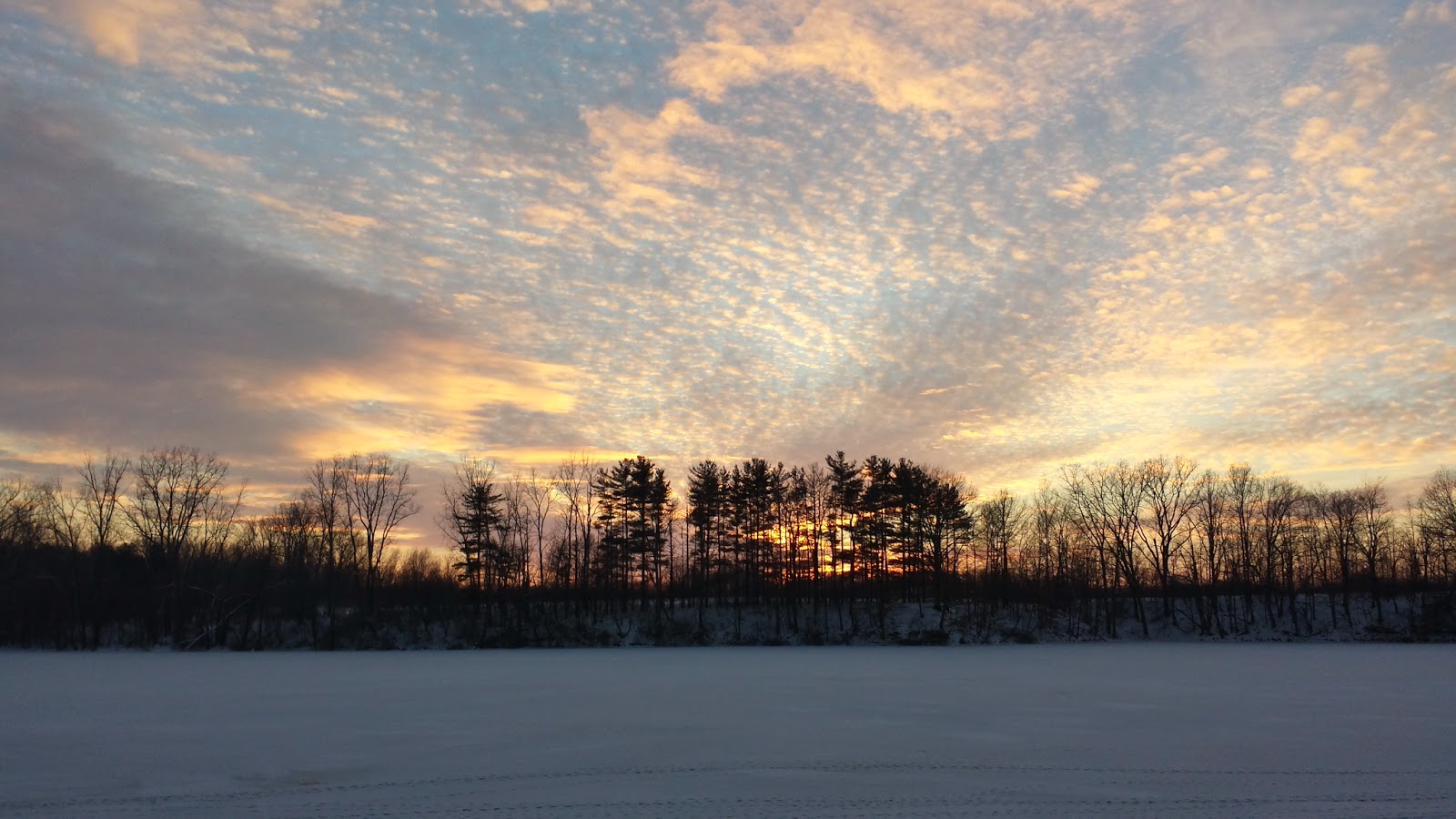 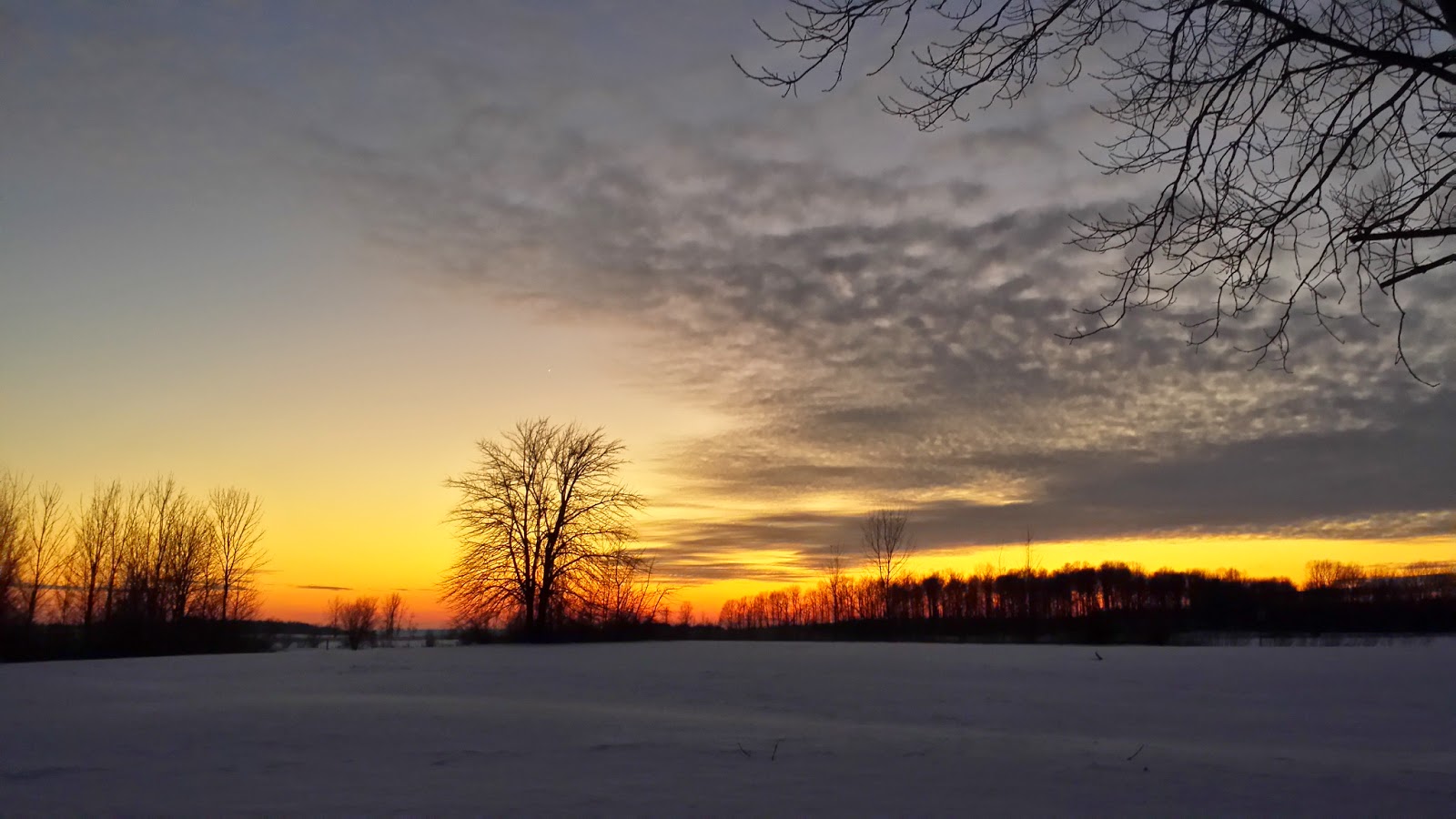 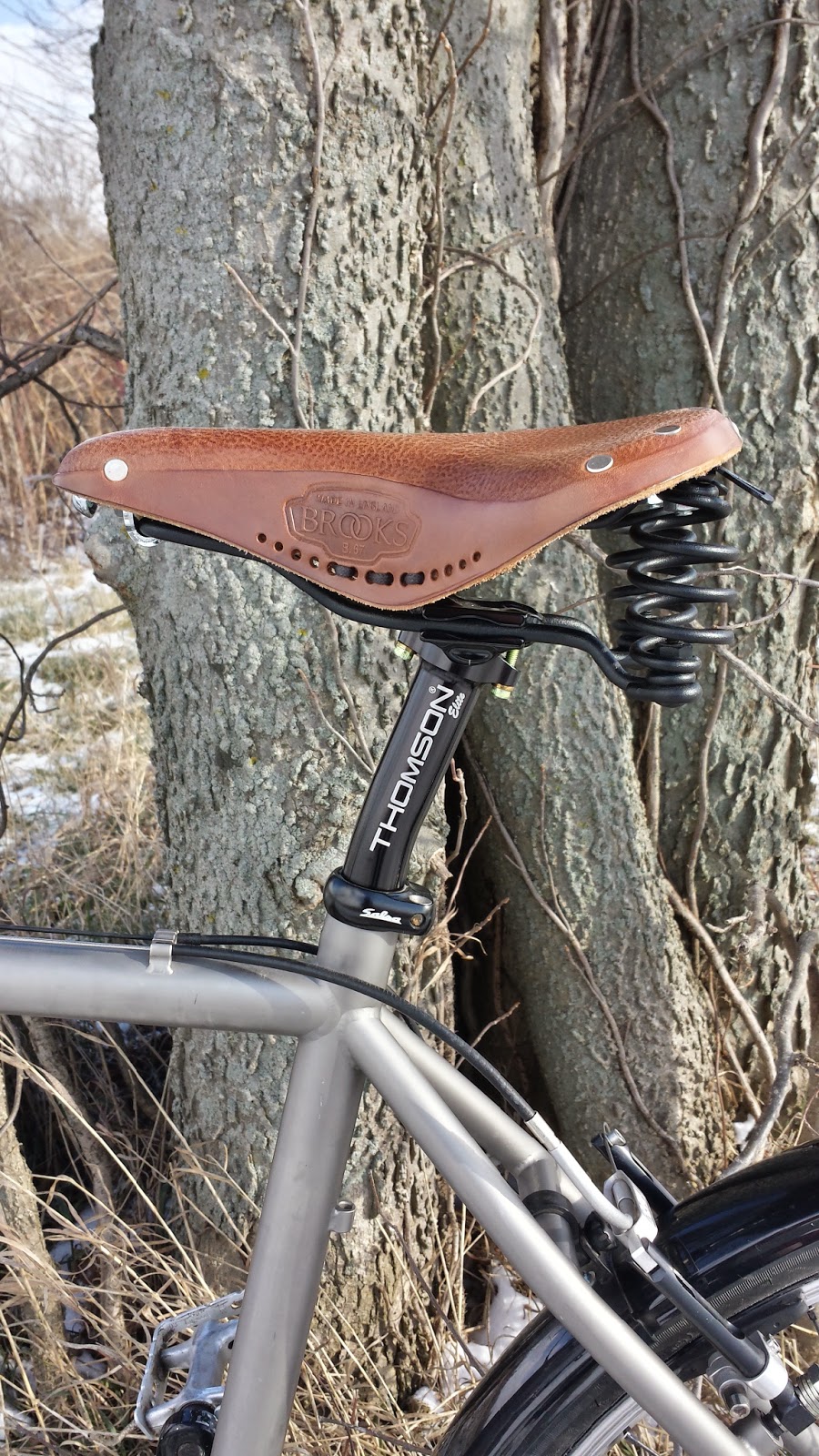 Making a change in one part of a system can often bring unanticipated results in other areas of that system.  I did anticipate the need for a wider seat when I changed the handlebar of my titanium general purpose bike but after about 40 miles on my new seat a different problem I didn't see coming appeared.  While the new Brooks B67 feels wonderful I just couldn't shake the feeling that I was sitting just a little too forward of the bottom bracket.

After thinking about it for a while it dawned on me that ten years ago when I was choosing parts to build up the Ti GP I decided on a zero setback seat post to help minimize the effect of an already long top tube and traditional mountain bike flat bars.  Leaning forward extremely to reach the bars the zero set back post always felt right to me.  Now setting much more upright the geometry suddenly seemed off.

Although I am getting better at managing my condition known as BPAD -(Bike Parts Acquisition Disorder) it doesn't take much to convince me a new part might just be the answer to all my problems.  My New Year's Resolution for this year is to make an effort to shed some carbon fiber from my bike and the seat post seemed like a perfect place to start. 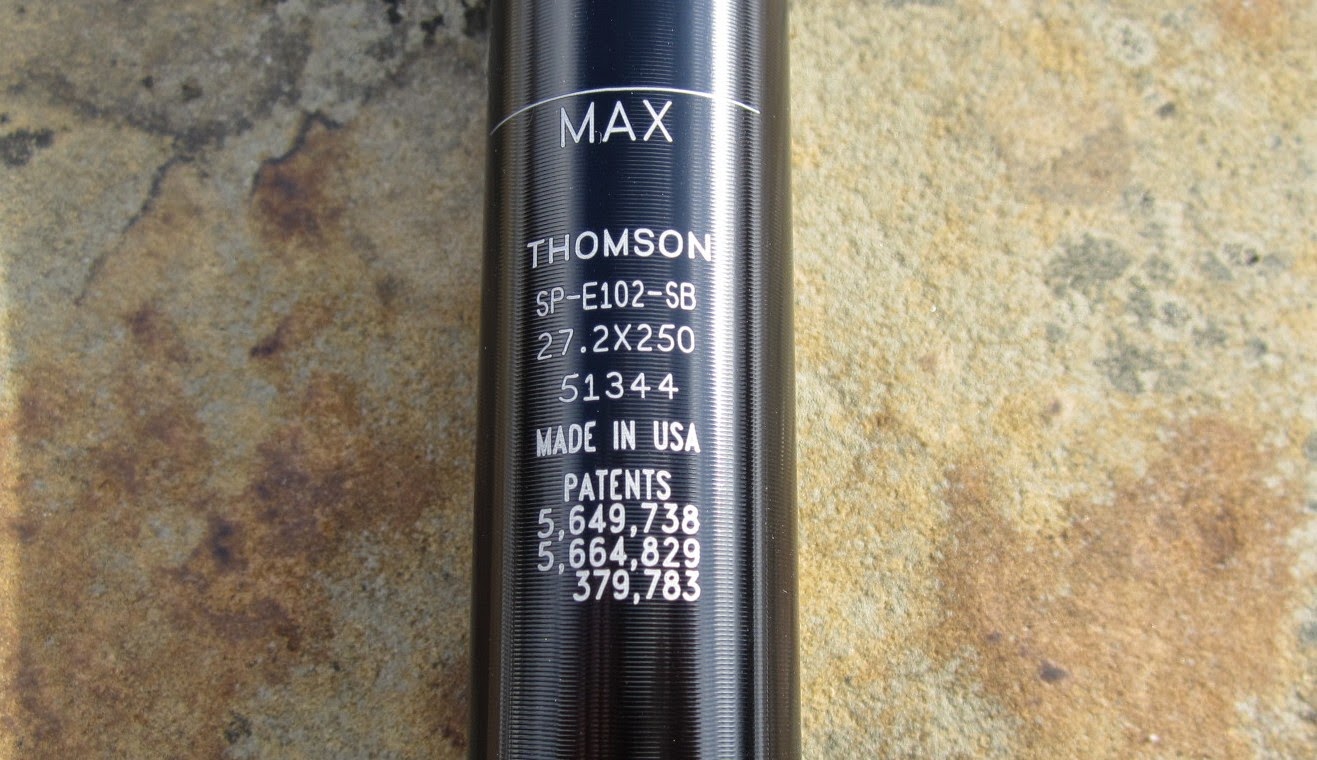 From the begining I've had a Thomson Elite stem on my bike and long been a fan of the component maker.  With the stem already on the bike it makes total sense that I ditch the old carbon post and get another Thompson alloy part to match.  I opted for the Elite model instead of the higher end Masterpiece.  The Elite is a beautiful piece of work on its own but I'm not too concerned with weight savings at this point which is all the Masterpiece really amounts to.

The cool thing about bicycles is that they are truly universal.  Quality bike parts are made all around the world.  Wheels from France rolling on American hubs; Handlebar and gears from Japan, An English saddle, American stem and post all coming together creating a fine machine.  Easy enough one could add Italy and Germany and many others to that mix.  A neat metaphor in there somewhere I think. 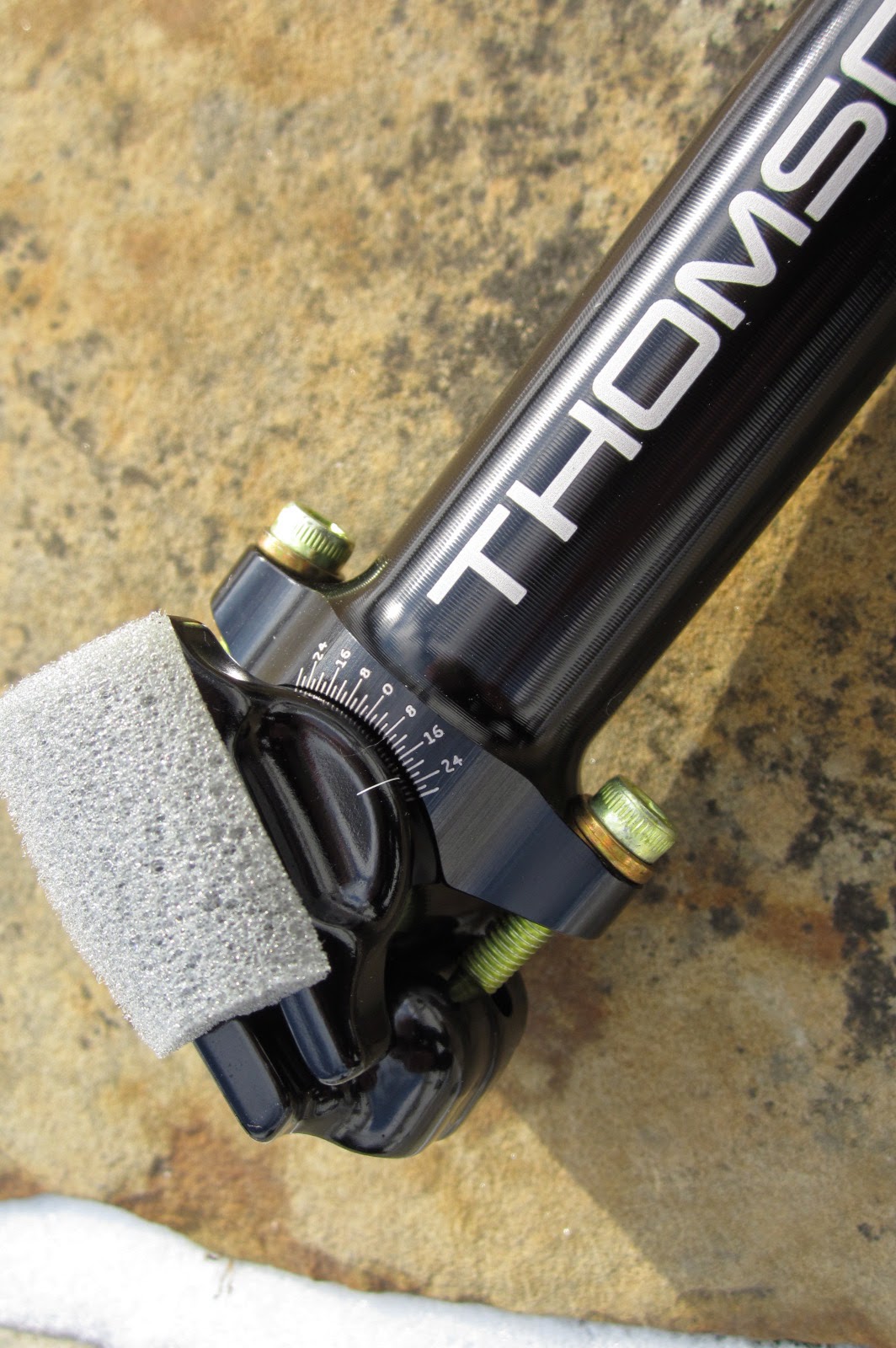 Thomson posts are very well machined and have the two-bolt clamp system I like best.  The engraved tilt degree indicator marks are also a nice touch.  Of course it was 9 degrees F the day I installed the new seat post but the sun was out and we all know it's completely irrational to have a new bike part and not test it out so I kitted up for the conditions and headed out. 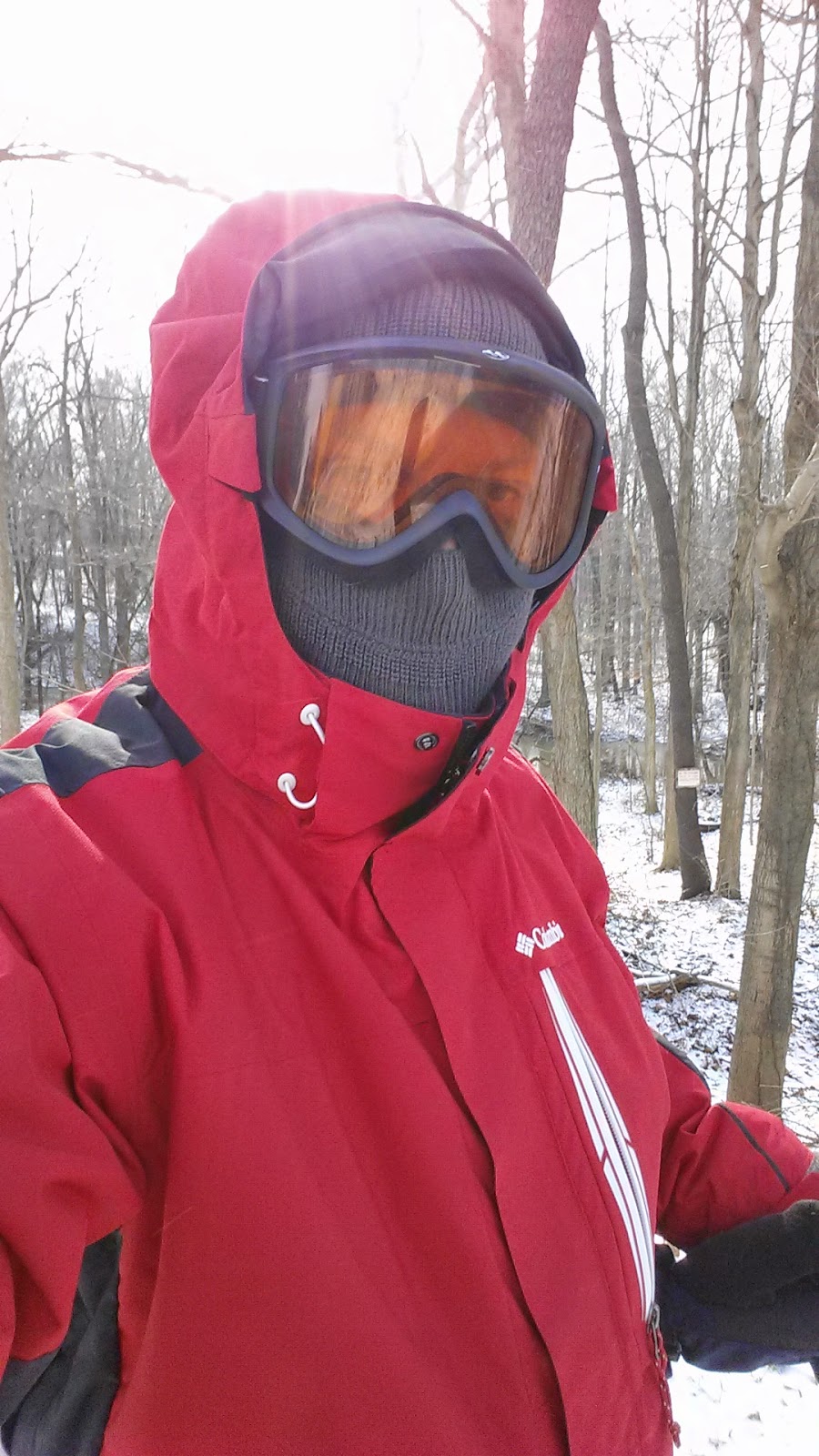 After a spin out around a couple country blocks I confirmed that the set back Thomson has positioned me right on the sweet spot.  Now if spring will just get here.