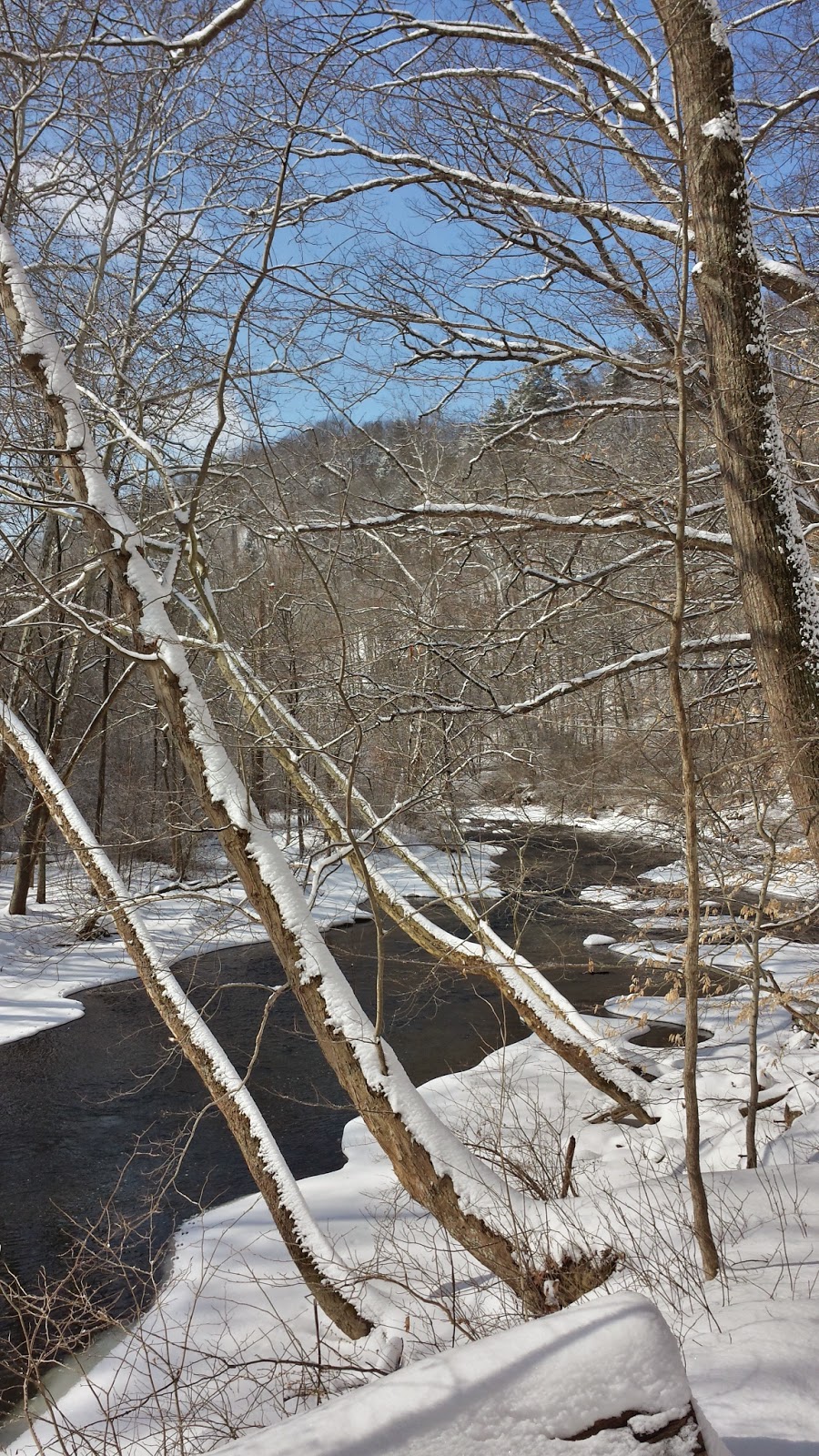 ...And it snowed another five inches on top of what we already had here on the ground so what else was left to do but go snowshoeing I guess!  When I have a whole day to kill by myself I love nothing more than to get away and enjoy a long physical soul-cleansing session in the wild.

The mode of transport doesn't matter much to me as long it's under my own power.  I'll be honest when it's cold I don't like riding bikes much and there are much better ways to recreate in the winter. With nearly a foot and a half of the white stuff snowshoes are the obvious choice. 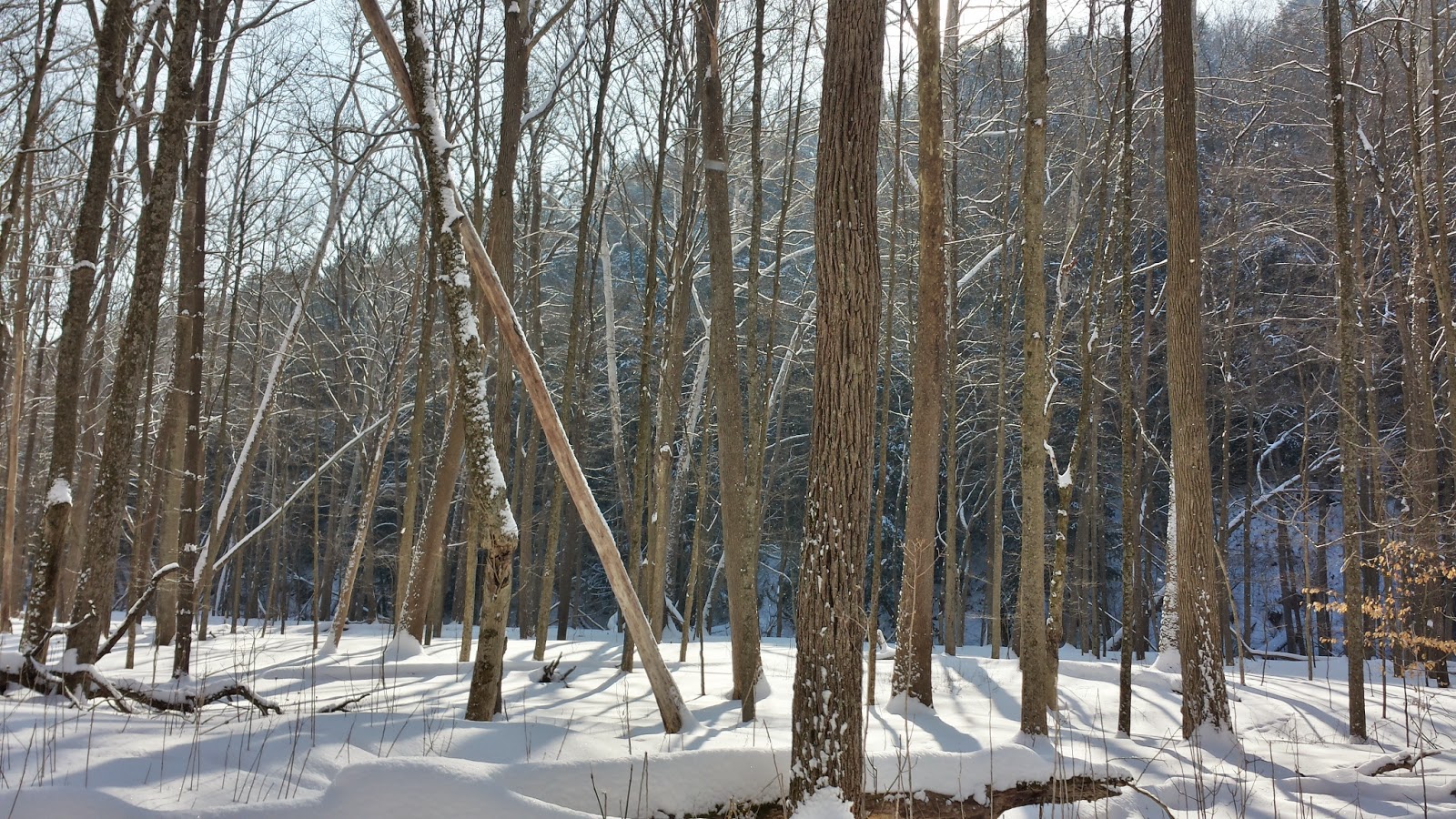 The previous night I decided to head for Mohican State Park because it is the largest tract of unspoiled land nearest to me.  I parked in the empty campground along State Route 3 at the far eastern end of the park.  My plan was to hike up the Hemlock Trail to the primitive campground, across the covered bridge and on to Lyons Falls to look for ice formations. 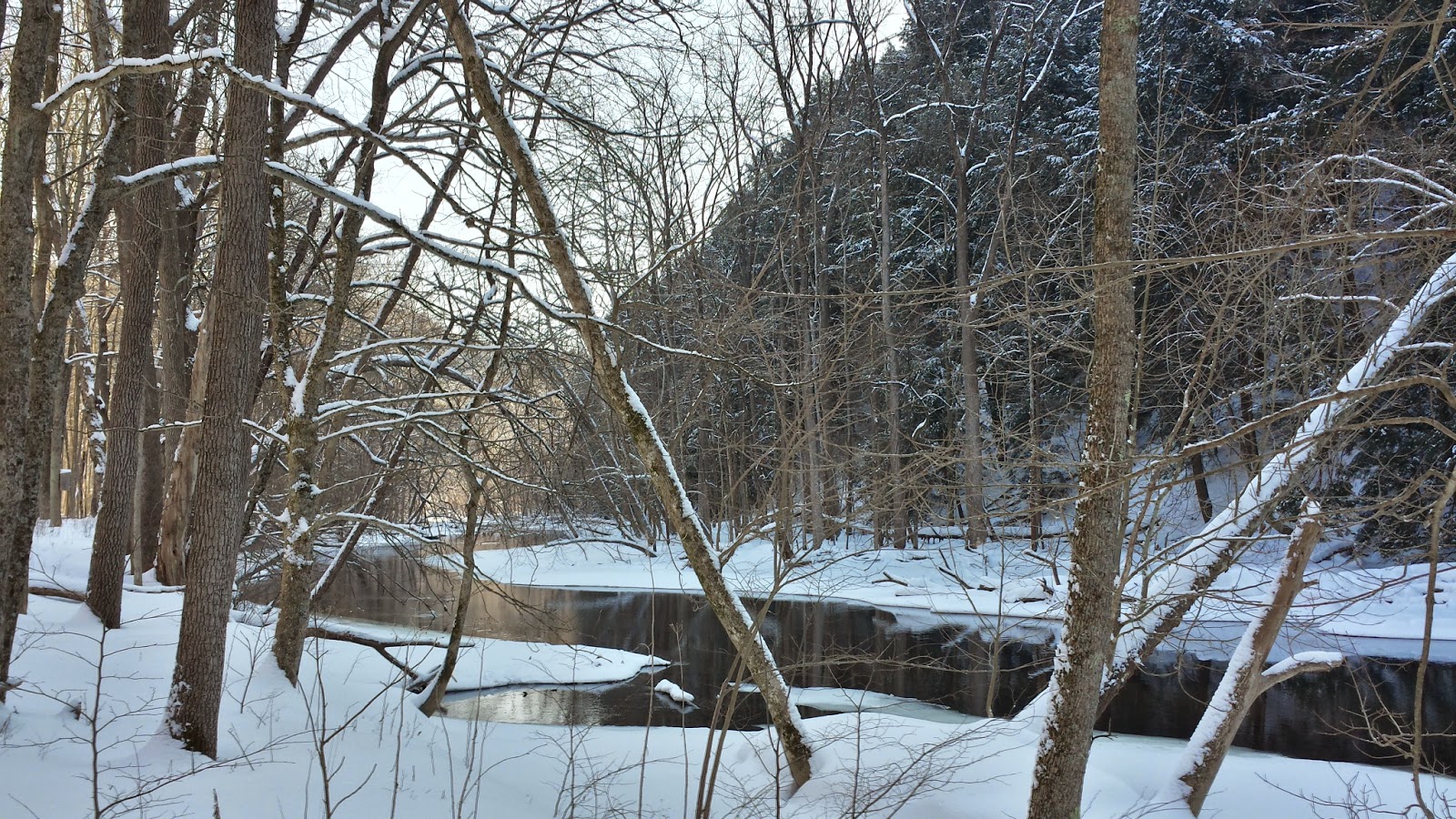 I got an early start for me anyway and hit the trail at 9:30 am. The air was crisp and cold and much of the valley was shaded by the high hills on the south side of the gorge.  The sky was blue and the sun was shining bright promising a good day to be in the woods.

Judging by the three inches of fresh snow covering the tracks of the last hikers on the trail I was the first person to come through the area in a day or two.  In the summer this park is full of people making noise and enjoying the park.  While that is good I like solitude and quiet and I find that in spades when I venture out in the off season.

The Hemlock trail winds two miles along the Clear Fork of the Mohican River and ends at the primitive camp.  From there its another mile along the camp road to the covered bridge.  Early on the snow was light and powdery and the going was pretty easy. 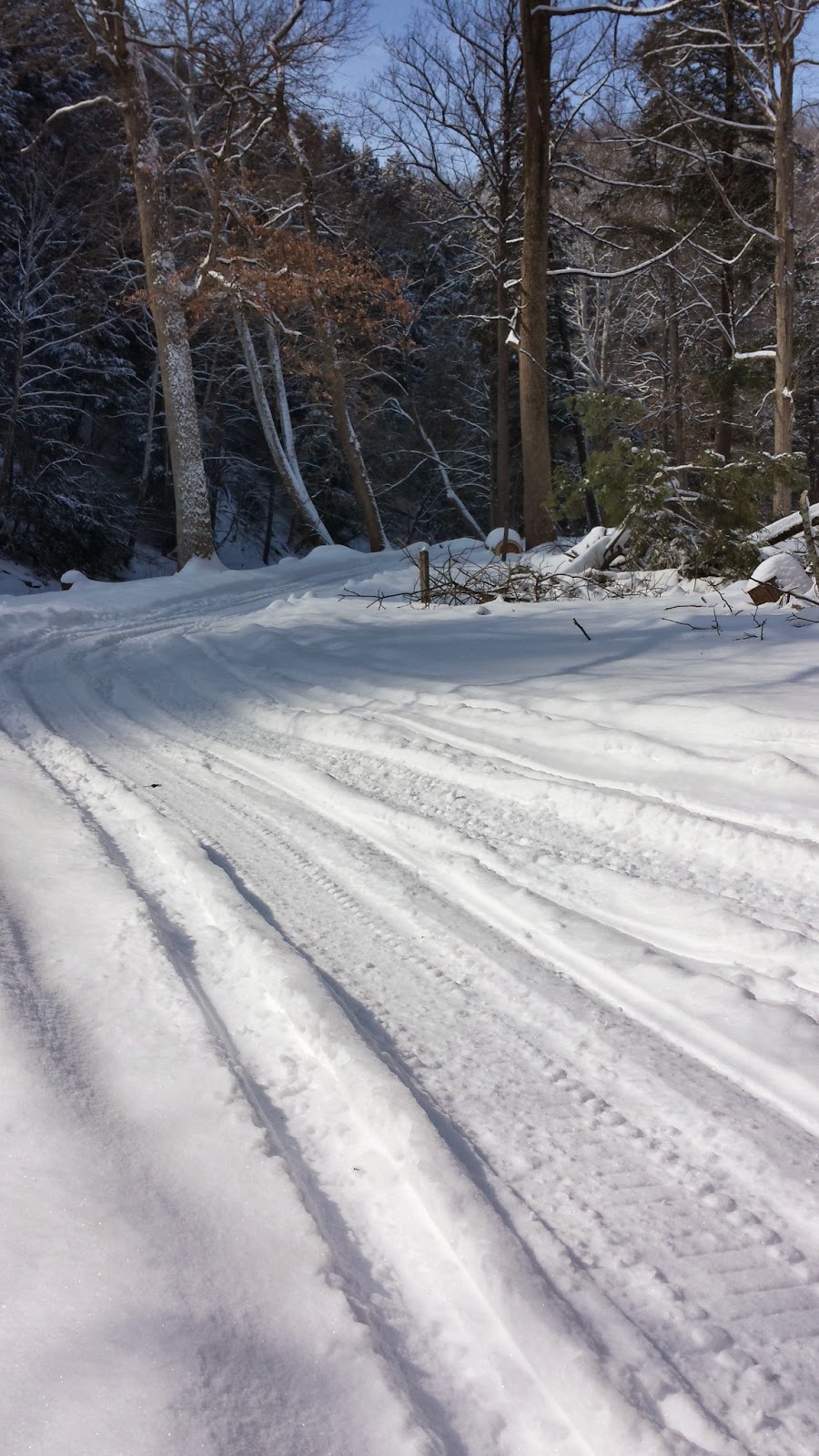 When I got to the camp road I found the only tracks were from snow machines.  This gave me a break from the snowshoes and I could walk along easy in my pack boots on the hard pack.

Here's a shot of a picnic table that shows the depth of the snow: 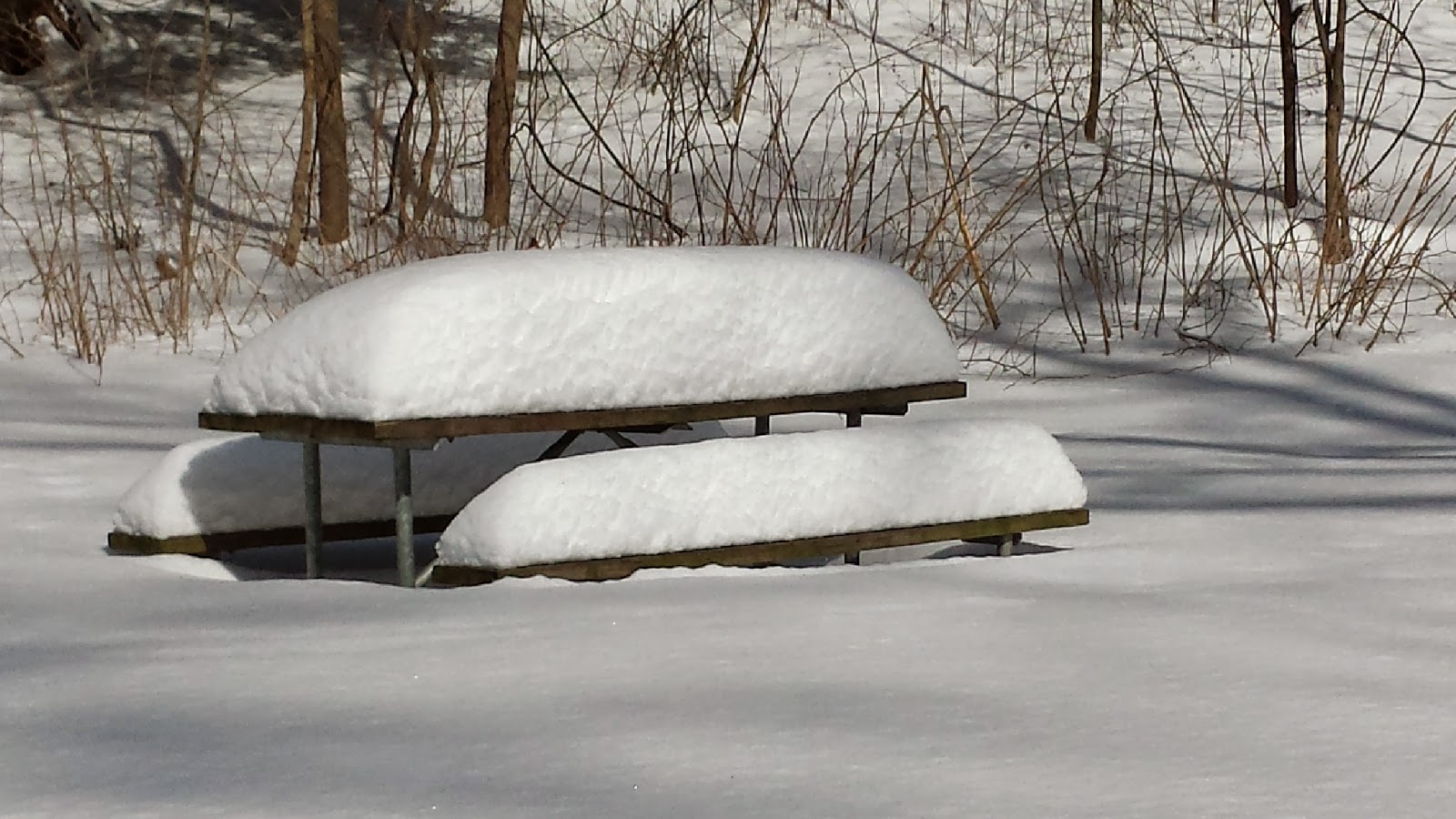 Soon I rounded a bend and the bridge came into view.  It looks great with a thick blanket of snow on top! 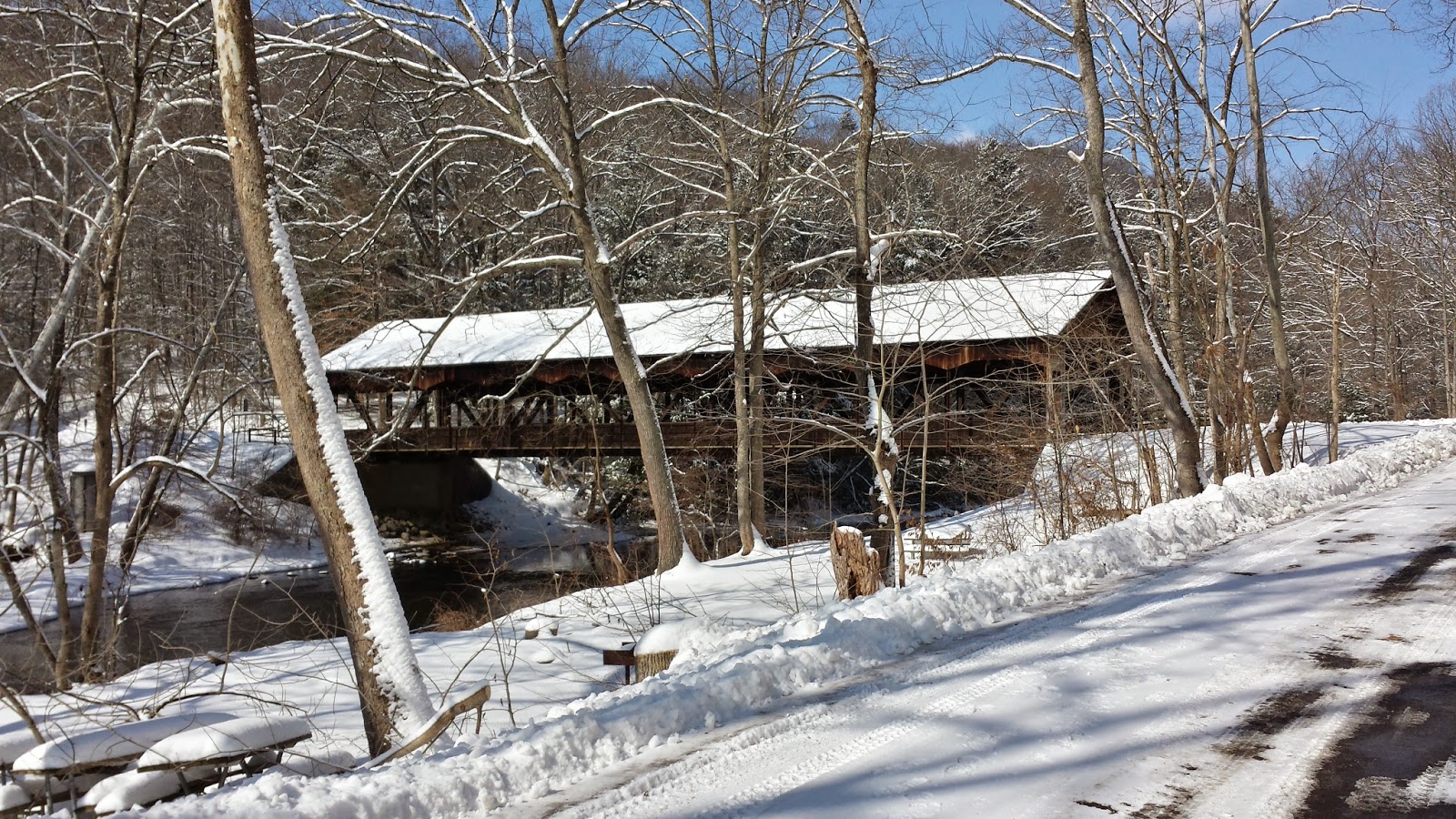 Once across the bridge I put my snowshoes back on and picked up the trail towards Big Lyons falls.  These hills are very old and most have been rounded off smooth over time but in places the sandstone rim of the gorge is still visible.  Another reason I love coming to the park in winter is because the understory is all open and it is much easier to see the lay of the land. 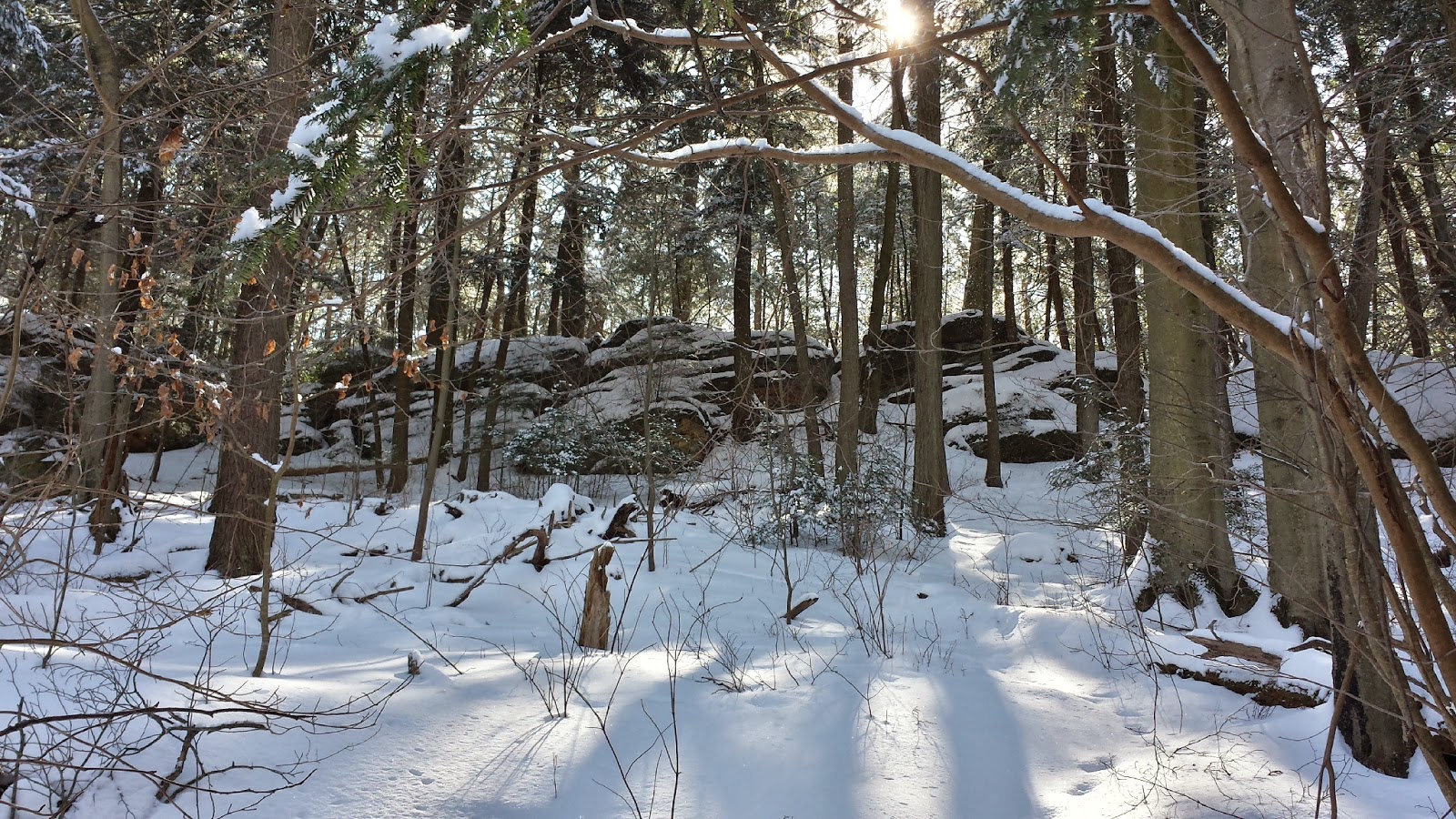 I stopped often to marvel at the silence. There was no wind at all and tucked down into the valley I couldn't hear any man made sound except for the occasional airplane passing overhead.  What sounds I could hear were the chirps of nut hatches and other small birds who I'm sure could sense the coming of spring.  I saw a few hawks and lots of deer trails but never saw any throughout the day.

A smaller drainage climbs up away from the Clear Fork and up this ravine is where the overhang is that creates Big Lyons Falls. 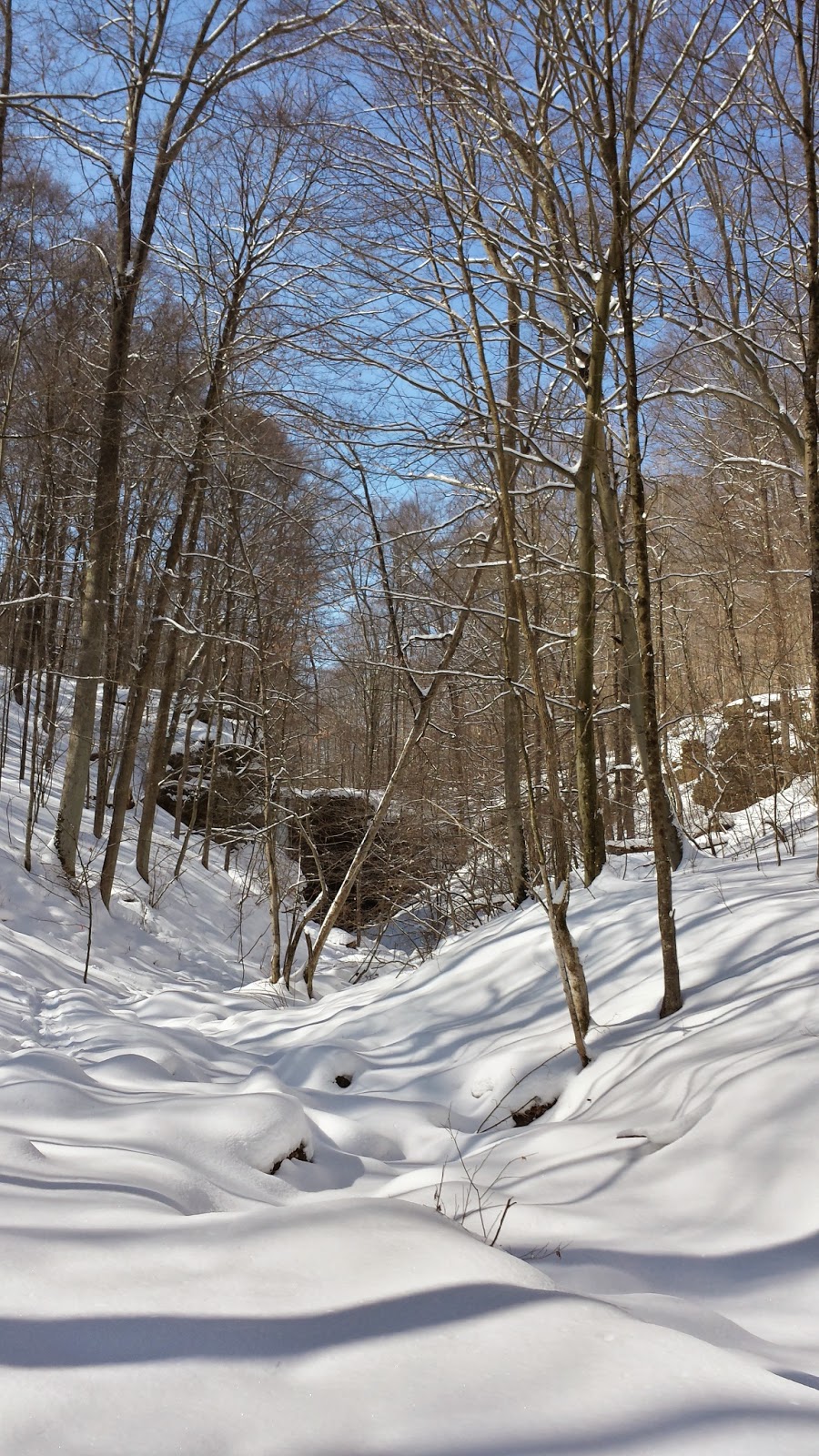 I like coming to this place every winter and seeing the difference in the ice formations from year to year.  This time around I found a huge column of ice rising all the way to the rim.  A little more impressive than what I documented a couple years ago. 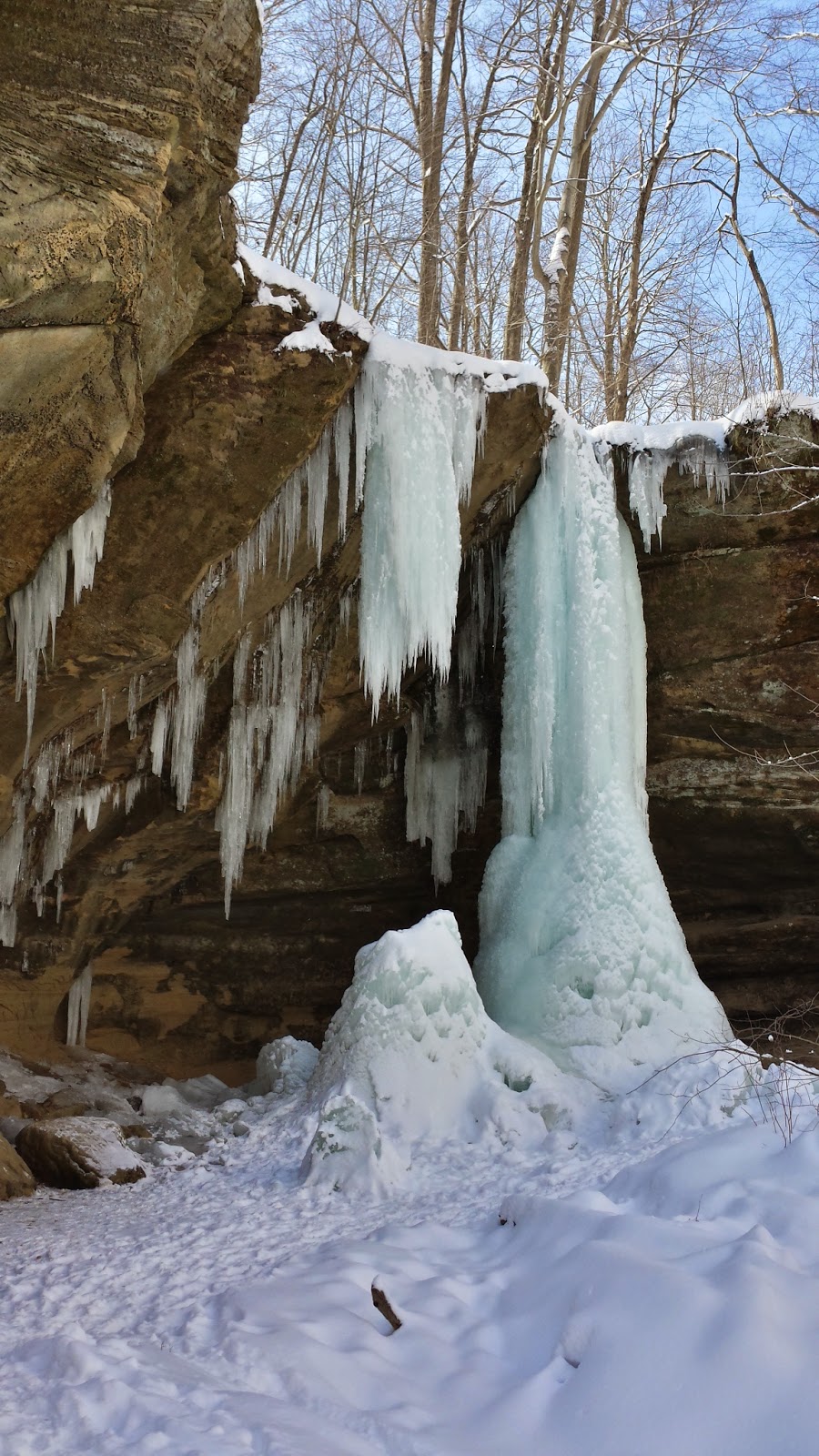 There was some water running down the outside of the column but there must have been hollow spaces on the inside because I could hear drips and drops echoing and sounding much like a leaky toilet tank. 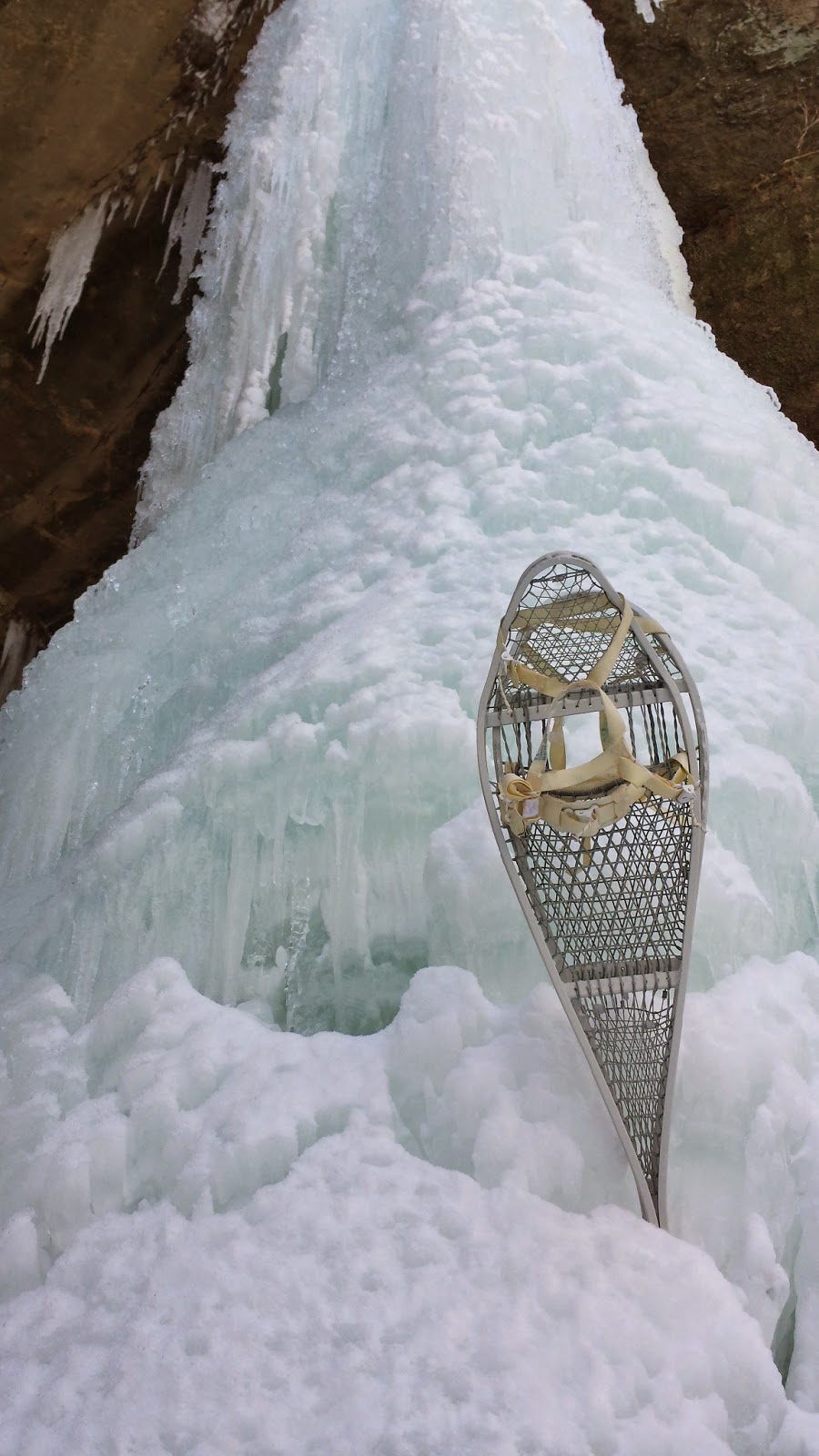 I took a break here and ate my lunch careful not to stand under any of the big icicles which from time to time a small bit would fall and smash into the rocks below. 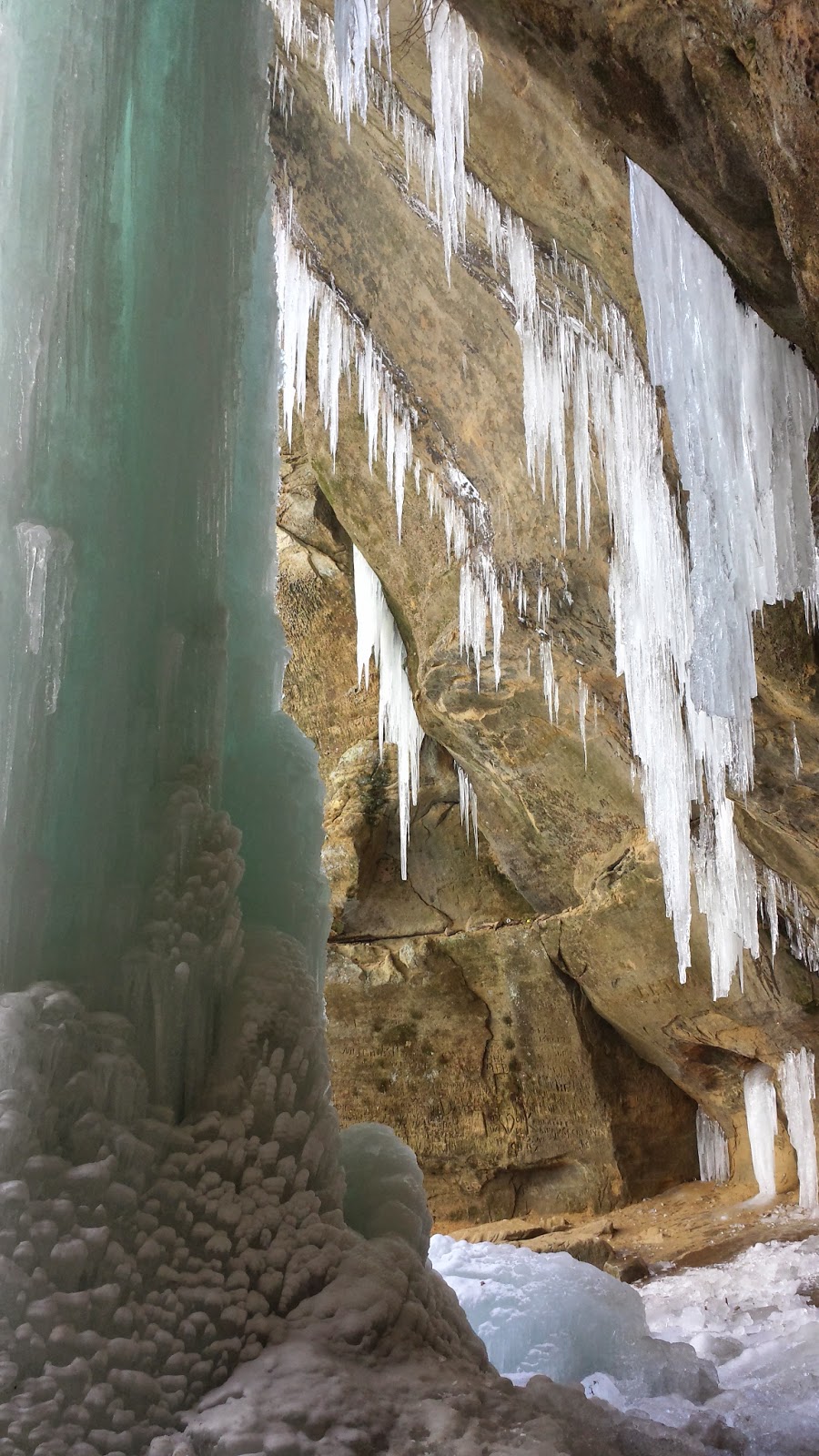 Because of the overhang of rock it was possible to walk all around the massive stack of ice and from the cave side the column was back lit by the bright sky.  The aquamarine color was very pretty. 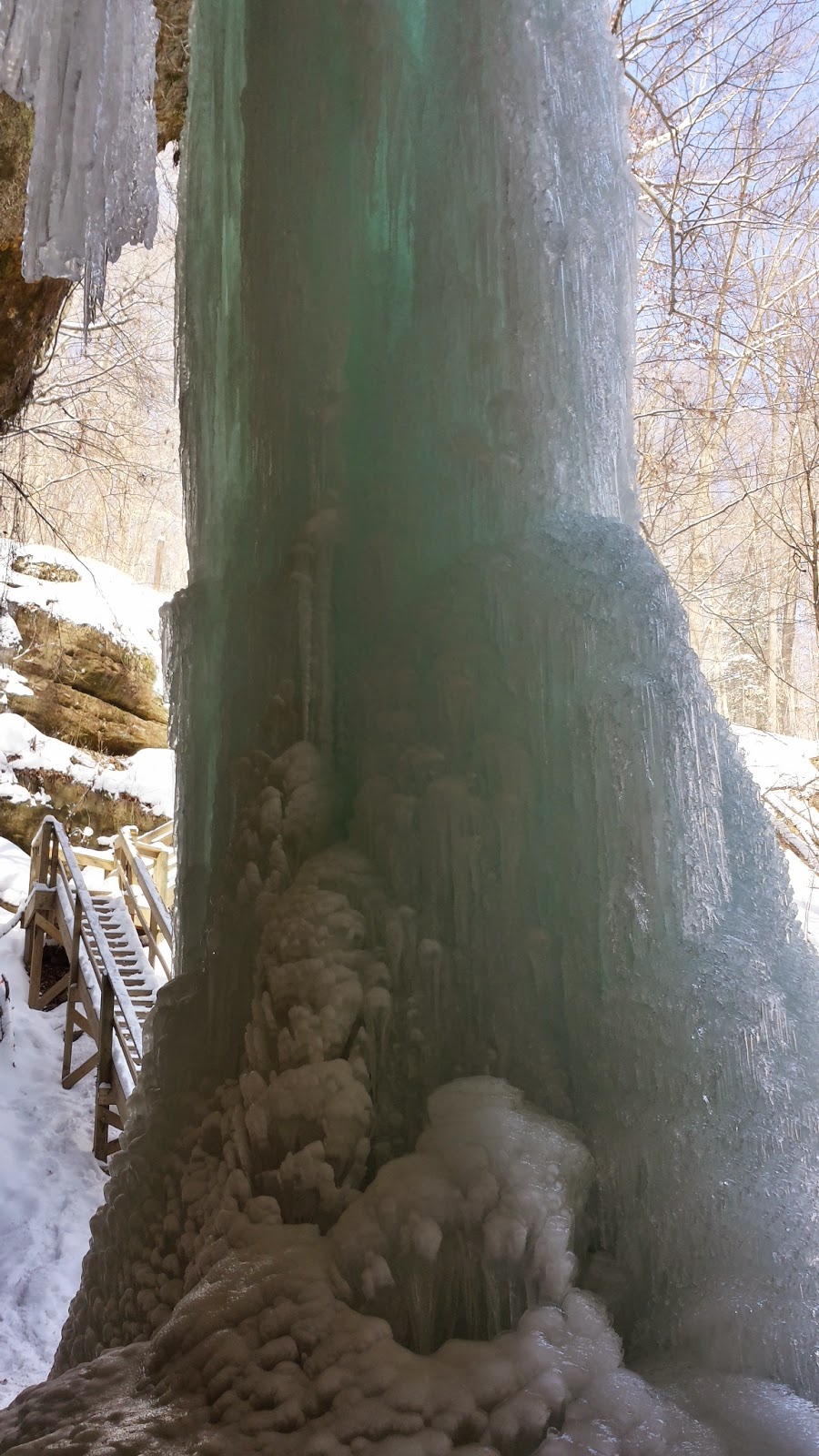 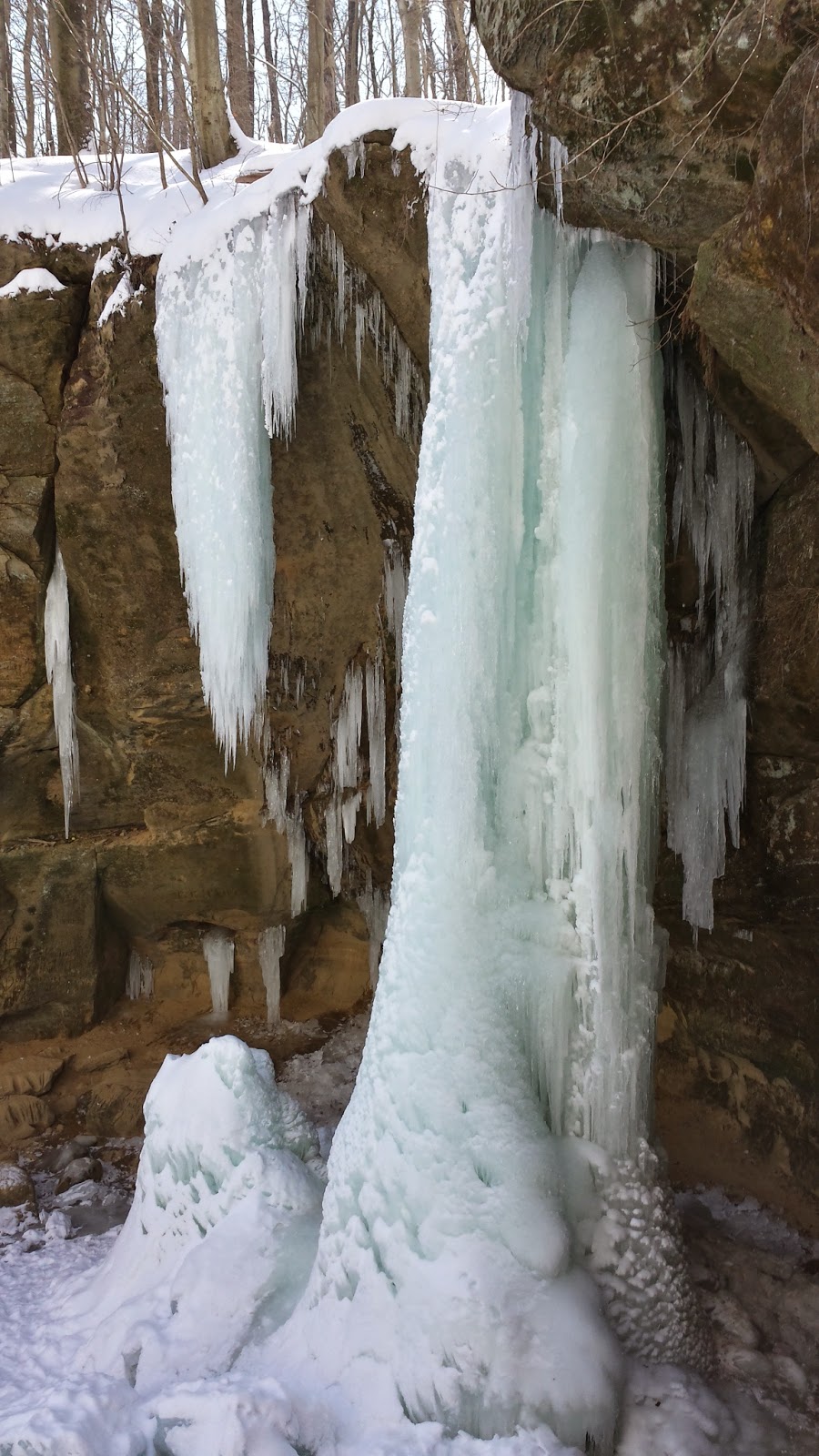 This view I captured from the top of the staircase visible in the previous photo.  I tried to get a bit of the trees in the frame to show the scale.

It didn't take long to cool down so soon I was back down the trail heading ever so slightly downhill.  The temperature rose during the day and the snow went from fluffy to heavy and wet. If I stayed in the path I cut earlier in the day it wasn't to bad but if I ventured off trail the snow it didn't take long for the wet snow to pack up around the binding straps and in the wire mesh of the shoes. 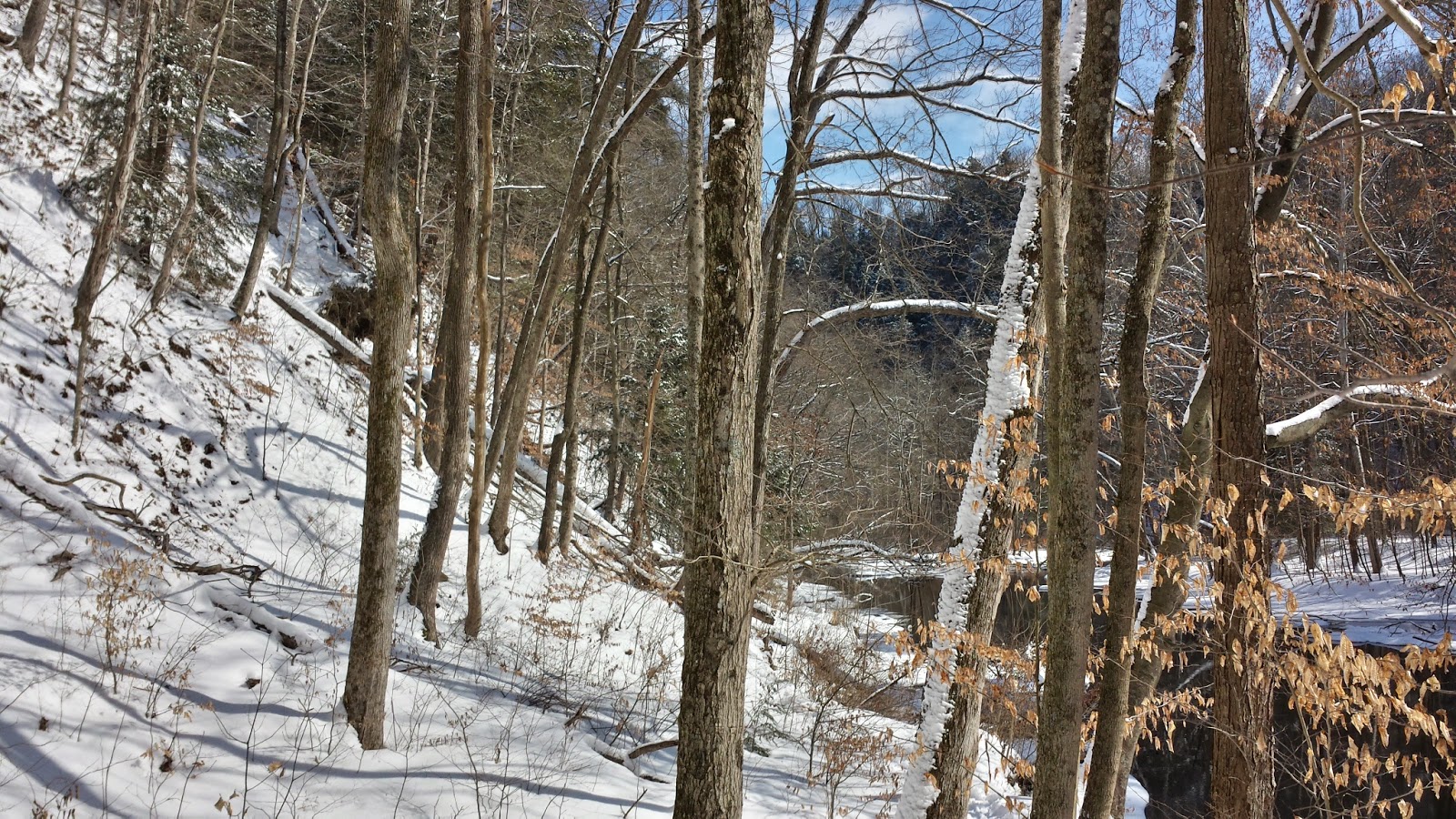 Even with the difficulty of the wet snow I couldn't imagine this eight mile slog with just winter boots on.  Yet again I'm amazed at how perfect the snowshoe is for traversing deep snow. 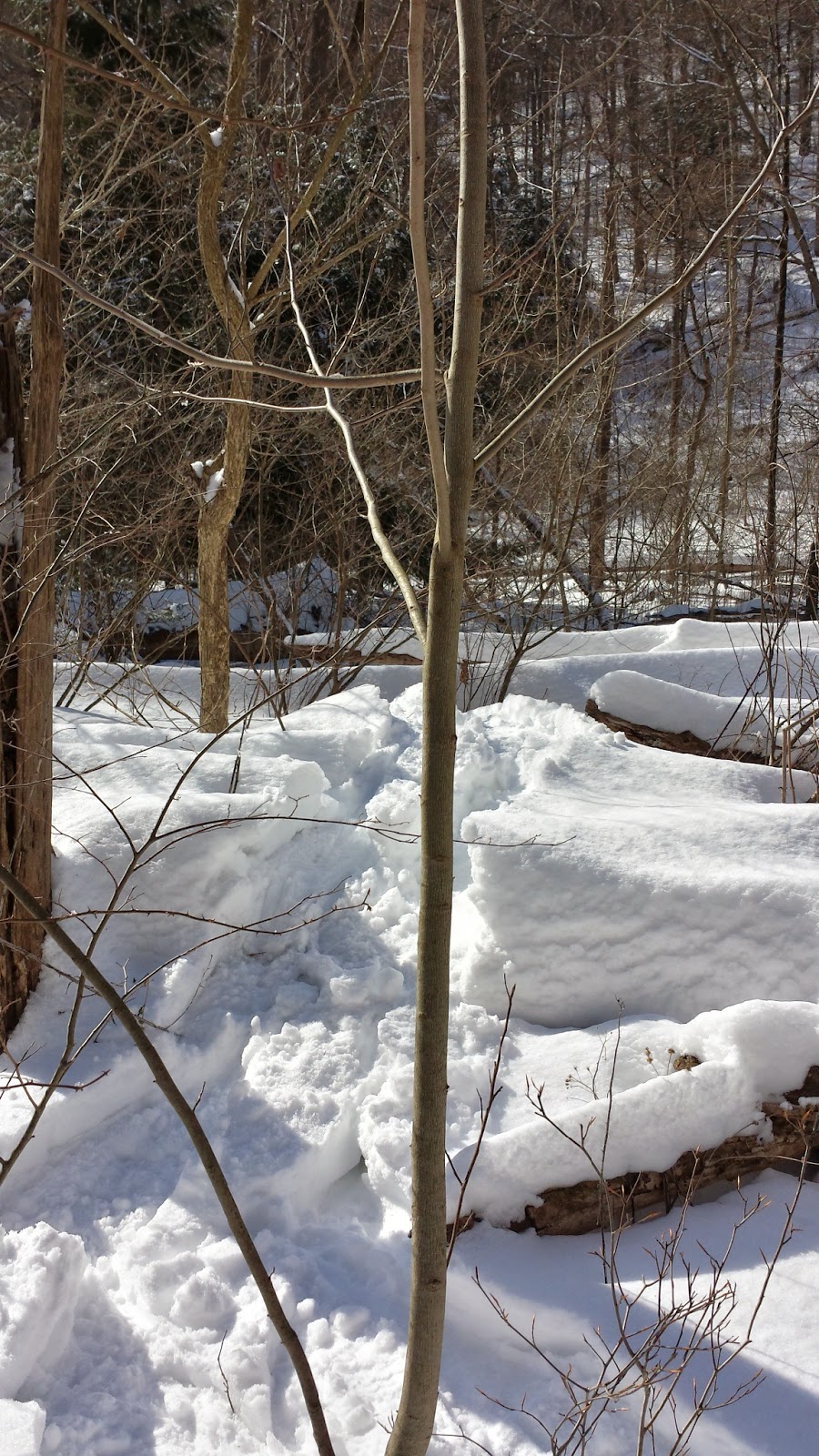 Here I easily negotiated a big pile of logs that would have been much trickier with regular foot gear and in any other season.  I've had a blast with these cheap army surplus snowshoes and I've certainly got my moneys worth but with the places I like to go a pair of modern shoes is starting to appeal to me more and more.  The flat fabric webbing of modern shoes would be less prone to packing up with wet snow and a more compact shoe would be easier to maneuver on tight trails and off track also. 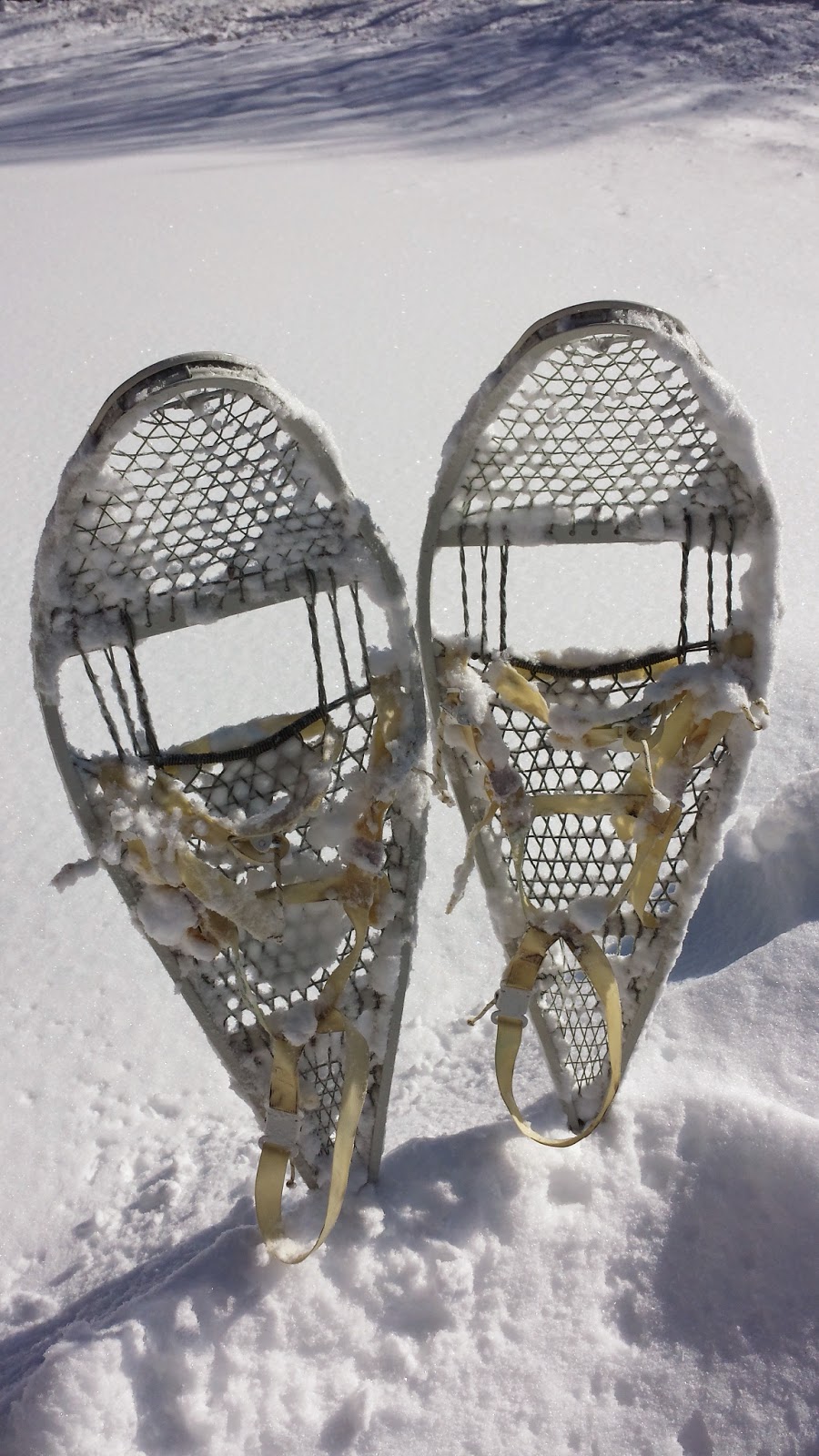 5 hours and 20 minutes later I made it back to the trail head tired but intensely satisfied with the day's adventure.  Every so often a beautiful day full of solitude and natural beauty mixes with the sense of euphoria hard won through long physical exertion and stirs something deep inside.  It's hard to put into words but I know I really dig it.

Posted by recumbent conspiracy theorist at 11:08 AM 2 comments: 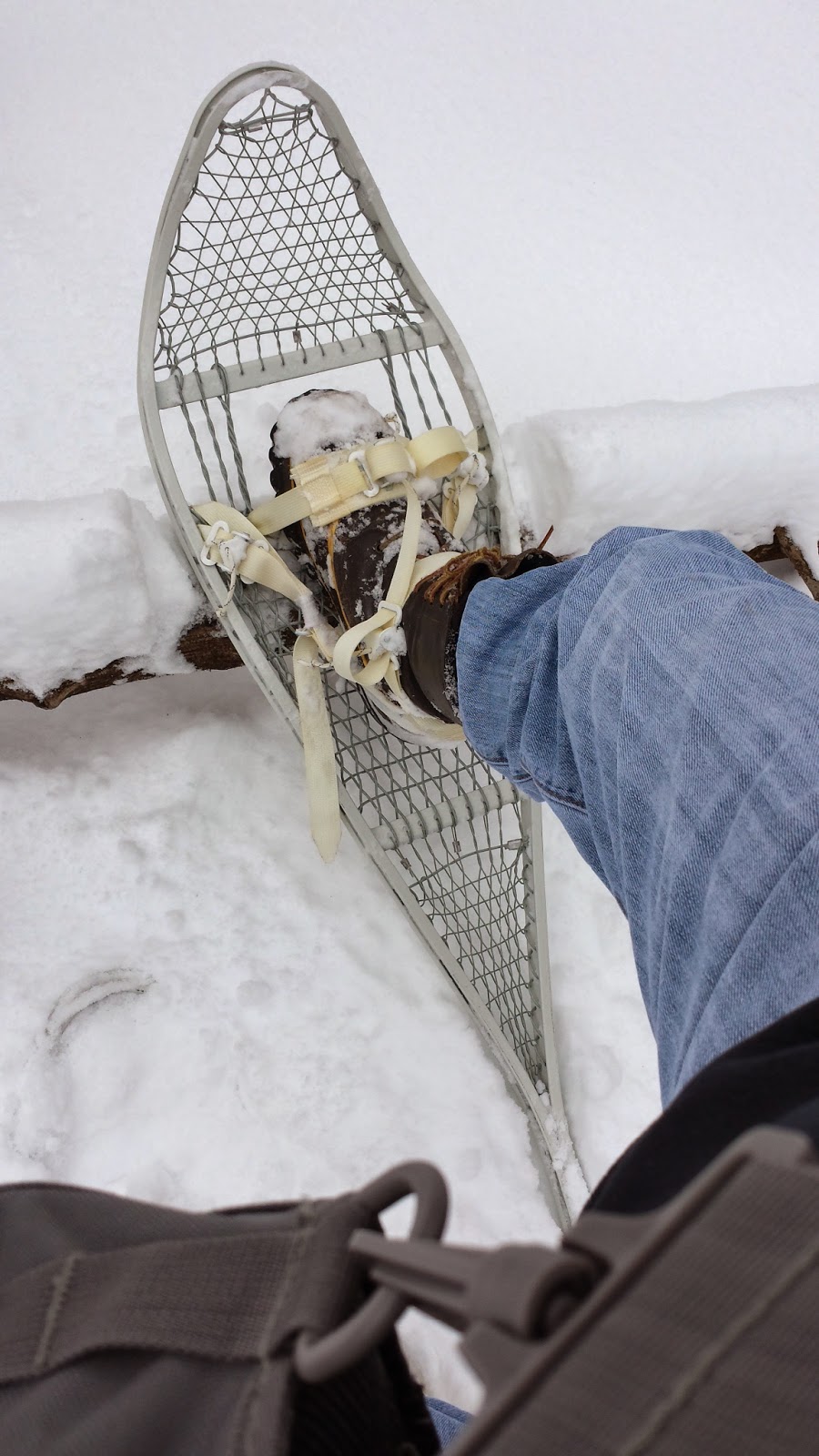 About a week ago the string of single digit high temperatures let up enough to allow us out for some snowshoe action.  The Road Queen had never been out on snowshoes before and we both love spending time on winter hikes so I knew she would like it.  One of the greatest things about snow shoes is the zero learning curve.  The hardest part is strapping them to your boots and that really isn't much of a problem once you've done it a time or two. 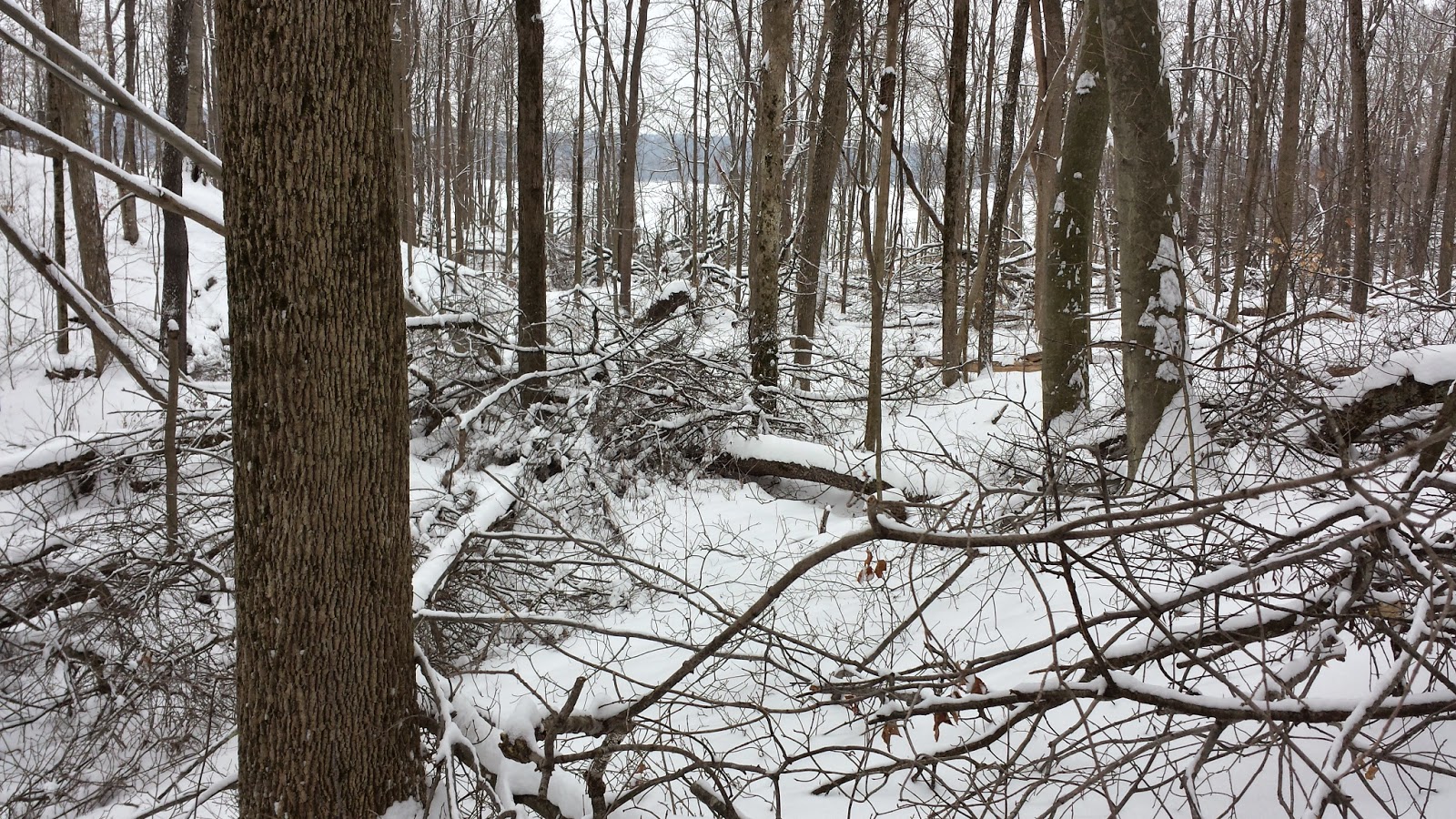 The day after a huge snowstorm we took a short drive to the Clear Fork reservoir where on the north side of the lake is a strip of woods about two miles long. This is the perfect place to spend a couple hours getting close to nature.  As I figured the RoadQueen took the snowshoes like it was second nature and we were off on our winter time adventure.

Violent summer storms have taken their toll on the trees around the area.  I've seen more blow downs and storm damage in the places I frequent over the past few years than I ever remember. 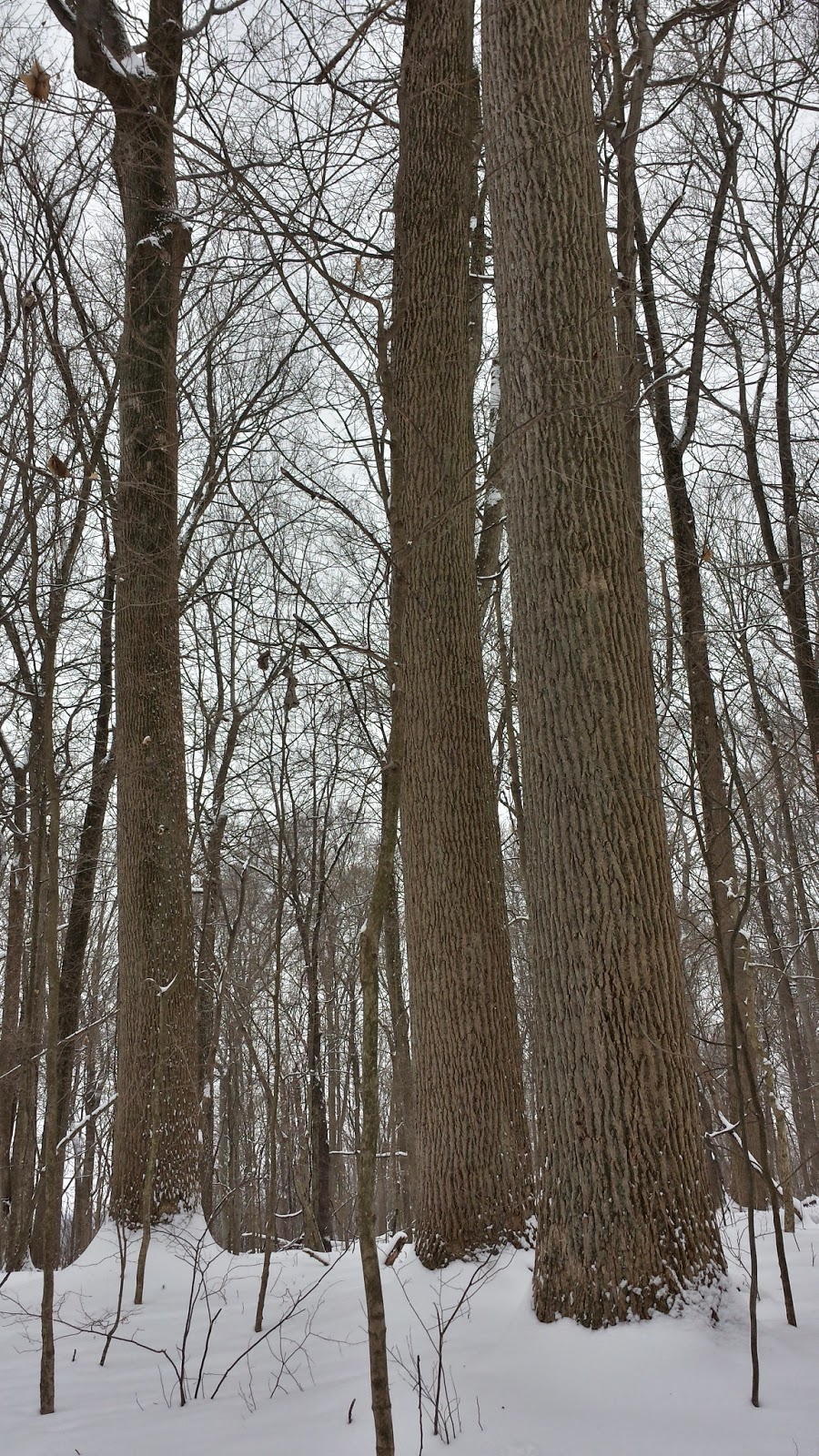 For a long while we noticed deer tracks in the fresh snow and found that they were traveling generally the same direction as us. Mentioning that it would nice to see some deer no sooner had we crested the next small rise we spotted the white tails up ahead. 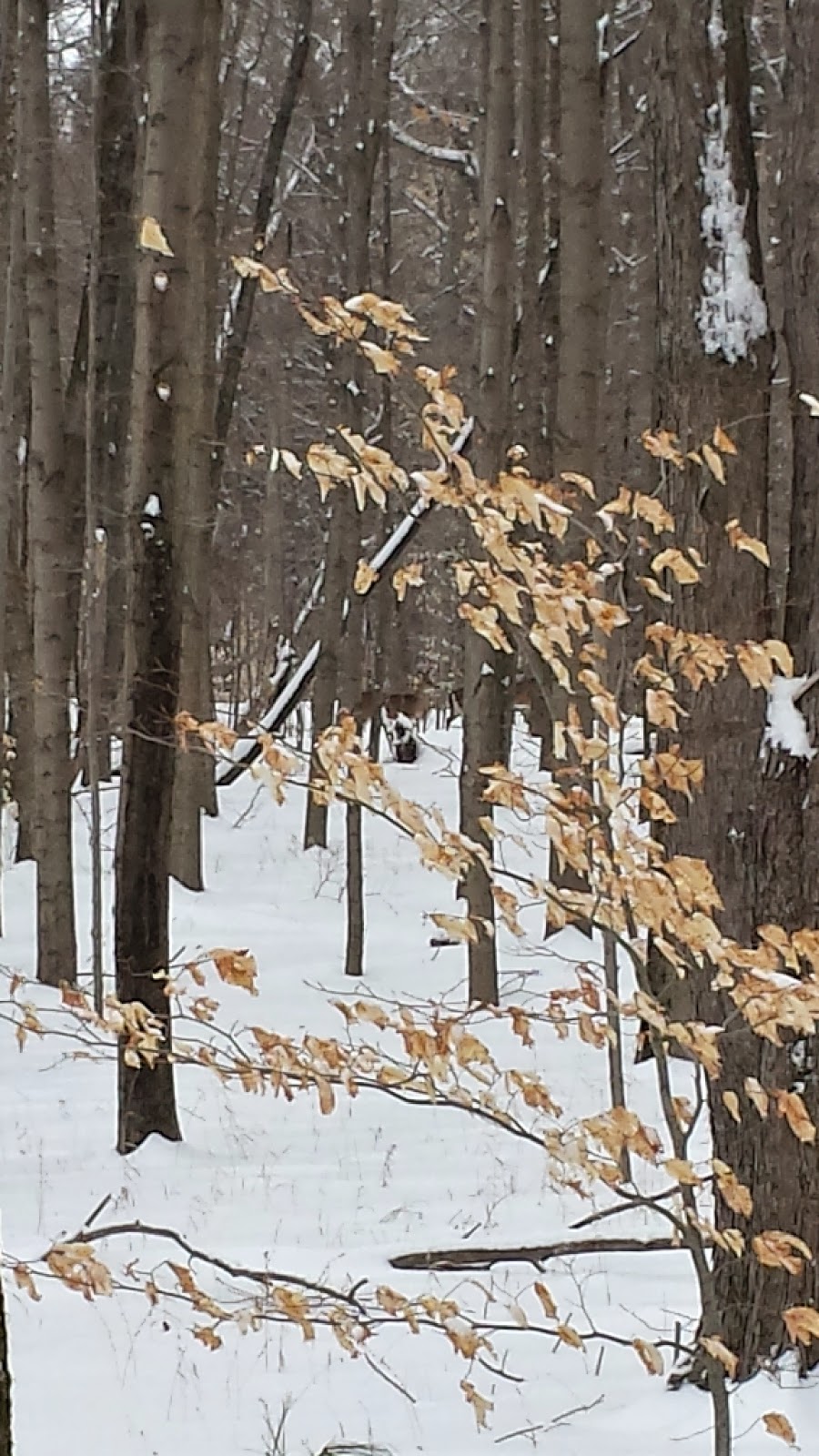 This land is public hunting area but hikers, Dog walkers and other nature loving people are always passing through so the deer are used to human activity and don't usually explode with white flags flying and make for the next township at first contact. They'll retreat cautiously and keep a comfortable hundred yard buffer.  I managed to get a shot of the group with my camera phone.

Another denizen of the forest we weren't lucky enough to spot but we did hear all afternoon were various woodpeckers.  The RoadQueen did catch a glimpse of the common Downy woodpecker.  What really caught our attention was the loud powerful staccato pounding of a much larger bird.  I'm sure it was a Pileated woodpecker because I've seen them before in this woods.  They are timid and usually stop pounding and hide out on the backside of their tree when people approach.  Although we never got to see the bird we did notice his handiwork. 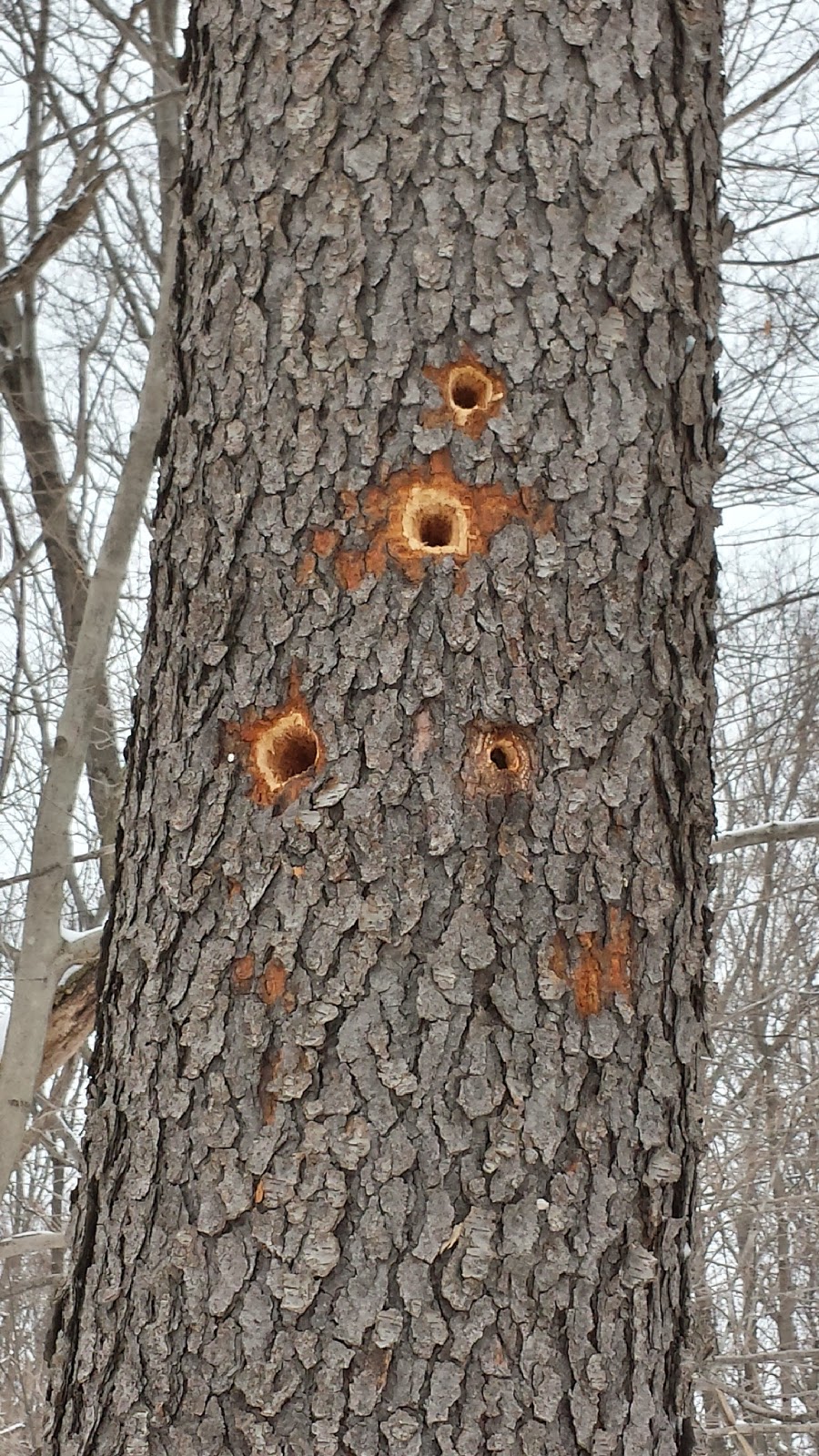 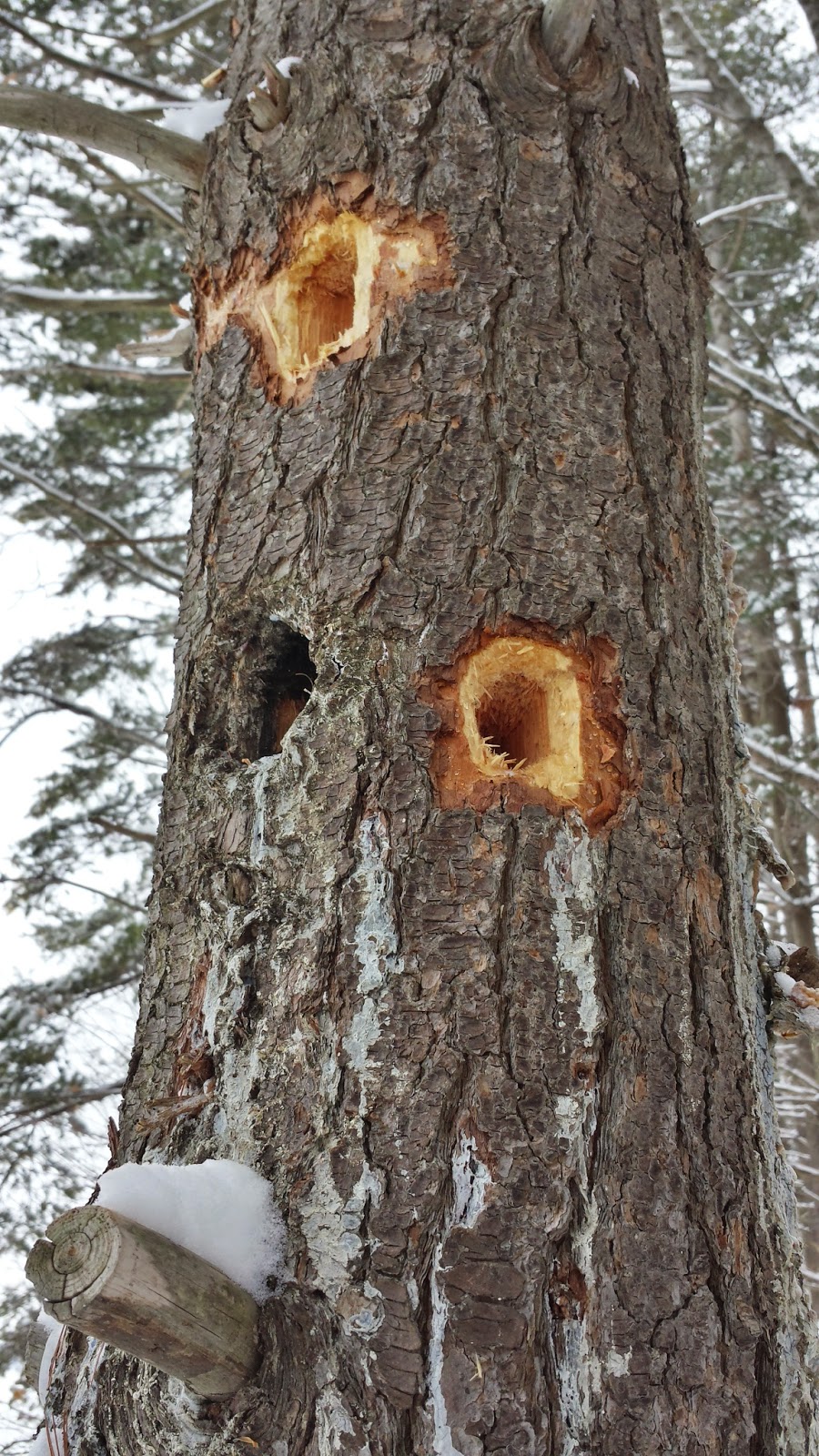 We ended up snowshoeing a total of about three miles. Of course we're all ready for spring by this point but getting out and doing something fun like snowshoeing makes it all a little more bearable.

Posted by recumbent conspiracy theorist at 8:58 AM No comments: