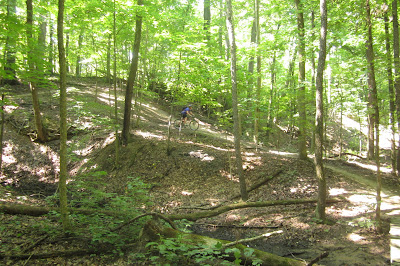 On Friday the Road Queen and I headed south to Alum Creek State Park to ride mountain bikes.  RQ is no stranger to trails in the woods but usually her mount has four legs, a mane and a tail.  This was her first time riding mountain bikes and other than a little case of nerves she did great. 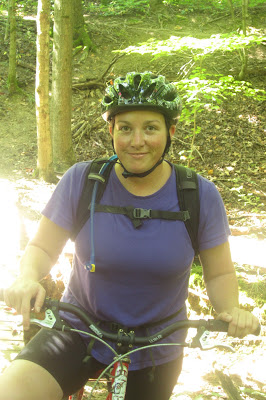 Riding off road for the first time is always a trial by fire but the Road Queen's tenacity and adventurous spirit served her well and she kept the rubber side down all day.

During a break during our ride she commented that trail riding on a bike is opposite from horseback.  On a horse you pick your way slow and careful down the hills obviously to keep the horse on his feet.  Going up is another story.  When climbing it's easier for a horse to take advantage of all that muscle and lunge up the hill with big powerful strides.  Hang on and enjoy the rush!  On a mountain bike it's the climbing that goes at a snail's pace as you grind your way up using the mechanical advantage of the bicycle's low gears.  It's the downhill runs that generate the thrills on a bike.

We spotted this little guy sulking around in the woods: 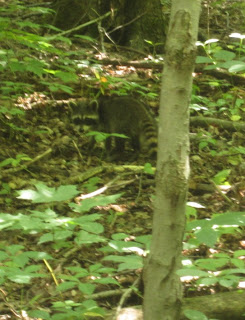 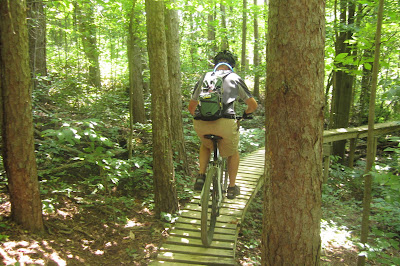 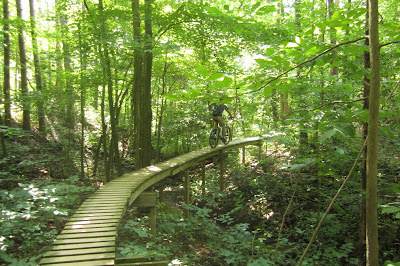 I've used clipless pedals for years on my mountain bike.  Bucking around on a hard tail bike over roots and rocks I always felt more secure with my feet attached to my pedals.  Since I got the dual suspension bike though I've noticed that the ride over the rough stuff is more manageable so I decided to ditch the eggbeaters and try some big platforms for change. 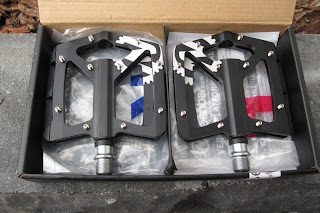 I picked up these Nashbar Venge platforms and had them in my hands Thursday just enough time to install them to my cranks and go for a little test spin around the neighborhood.  Tall studs screwed into the pedal provide a solid grip and the nice wide platforms feel very stable.  After just a short while on the trail I was sold.  Clipless pedals have their place for sure in racing but for more leisurely riding in the woods I really like not having to deal with clipping in and out.  When I did cut loose on a sketchy downhill or catch a little air off a jump the pedals felt as stable and secure as ever.

Low profile, well finished in handsome black with sealed cartridge bearings all for $39.00 I think one would be hard pressed to find more value in a good platform pedal.  I'll continue to mash and bash them and see how they hold up in the long term.  For now they've found a home on my dual suspension and I hope they stick around. 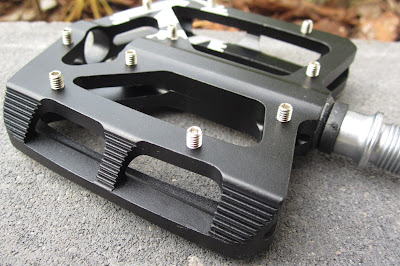 RQ said she loved the mountain bike experience compared to the monotony of road riding  and wanted to go again so on Sunday I took her to my local single track The Stoller Road Trail located near Lexington, Ohio.  We spent a few hours playing in the woods and enjoying the pretty views and nature all around us. 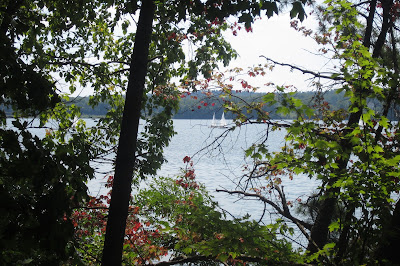 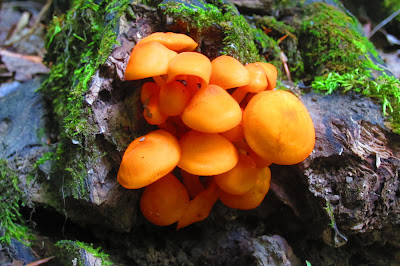 On her second ride RQ got a handle on her nerves and was able to begin honing the fat tire craft.  Since she doesn't have her own mountain bike I let her borrow my Yeti single speed.  Now that may sound like a dirty trick cutting a new rider loose on a one geared bike but I actually think a SS is a great way to learn the basics of off road bike handling.  As a freshly minted trail rider bouncing around on rough root covered single track it's hard enough just keeping yourself upright let alone trying to figure out when to shift and what gear combinations to use for any given situation.  RQ agreed and said she liked riding the Yeti. 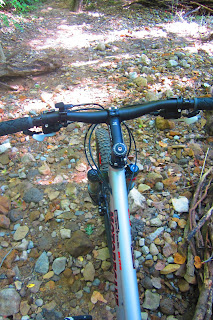 This time of year in the late summer is when I ramp up my moutain biking activity.  The cooler weather and clear crisp days makes the woods magical and the place to be.  Rolling along on fat tires keeps you moving just fast enough to stay ahead of the biting insects and the trails are dry and worn smooth by a summer of use.  If you need me I'll be in the woods. 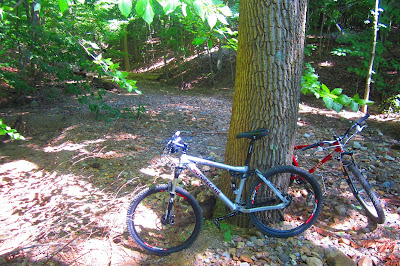 Posted by recumbent conspiracy theorist at 8:03 AM 2 comments: 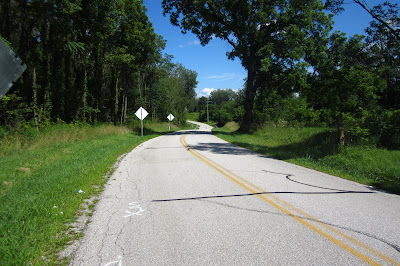 I finally got out for a ride on my new found route the Parcher Road Loop and remembered to bring along my camera.  It was a Saturday and the weather was beautiful for an afternoon spin.  One of my favorite things to do on my bicycles is just head off without a destination in mind and explore.  That's how I discovered this loop.  I try to pick routes that keep off the busier state highways and keep to the rural country roads.  I'm still amazed that I can find roads and places I've never been leaving by bicycle from my driveway and the town I've lived all my life.

The loop travels west and north into Crawford County Ohio and comes within a couple miles of the county seat;  Bucyrus, Ohio.  The route is mostly flat rural farmlands but there is a few rolling hills where the loop intersects the Olentangy and Sandusky River valleys.  I welcome a few hills on any ride to break up the monotony of the surrounding glacial plains.

On the western leg of my ride I approached an overpass that would eventually carry me over Interstate Highway US30.  I kept hearing the sound of a small high revving engine coming from somewhere ahead on the other side of the overpass.  I knew it wasn't coming from the highway itself because the sound wasn't the steady drone of a highway going vehicle.  The motor noise was erratic; rising and falling in pitch and intensity.  I scanned the skies above looking for a radio controlled airplane but no aircraft was visible in the brilliant blue. 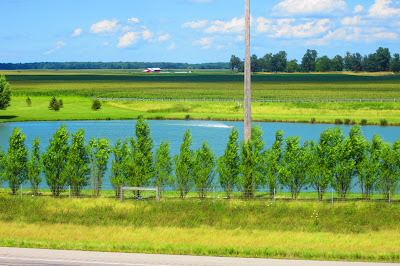 Finally I crested the rise and from my vantage point I discovered the source of the buzzing engine.  Someone was enjoying the afternoon doing their thing piloting a radio controlled gas powered speed boat around this pond.  I've always been interested in the R/C world but with a bunch of other hobbies and interests competing for the small sliver of free time I have I never got into model craft. 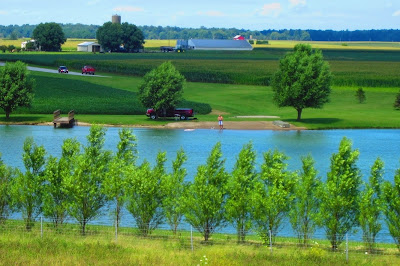 The boat driver is visible on the small beach on the opposite shore. 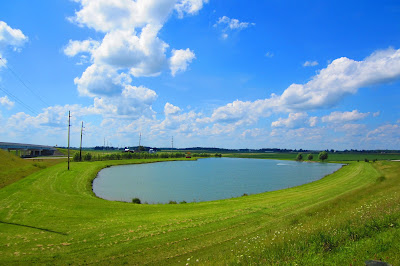 Beautiful day to be out on a bicycle. 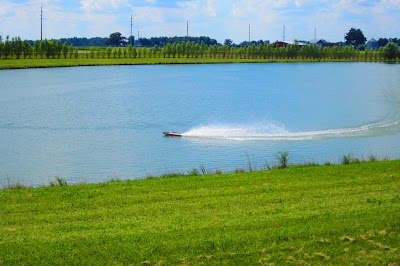 I hung out for a while watching the little boat run laps around the lake.  It was amazing. The craft could really get moving and throw up a nice rooster tail in its wake. 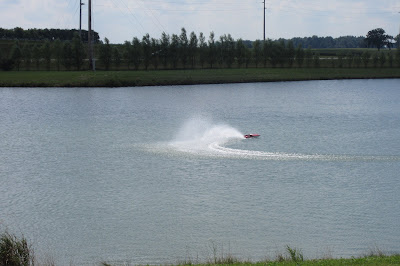 Further along the loop I noticed this Ohio Historical Marker and learned something new about my county.

Long known to the Indians for the mineral spring water, this land was purchased in 1819 by Samuel Knisley.  After 1880 it was developed as a resort area by Dr. Jerome Bland, who also established a cattle and horse breeding farm.  In 1930 the land became part of  PICKWICK FARMS which in 1976 was the largest standardbred breeding farm in Ohio and known throughout the United States and Canada. 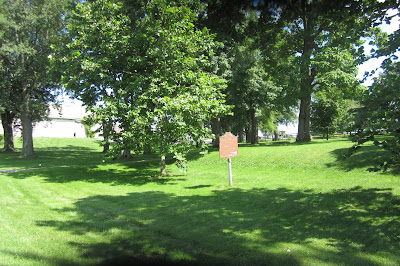 The farm grounds are huge and cover a whole country block. From the road the barns are a good distance and sit up on the high ground. 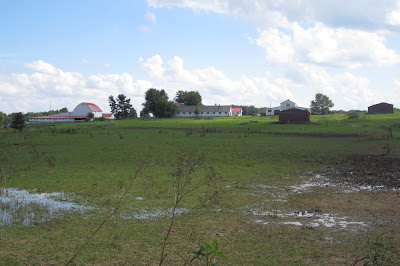 And it looks like the breeding program is still underway and successful as this good looking herd of Black Angus demonstrates. 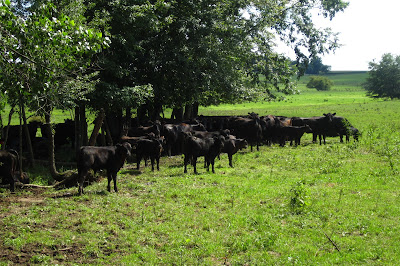 I don't mind watching a little Discovery Channel on the television if it's raining outside but in the end the bicycle wins hand down for getting out and exploring the world.  There always seems to be something interesting just around the next bend.

Posted by recumbent conspiracy theorist at 9:25 AM 3 comments: 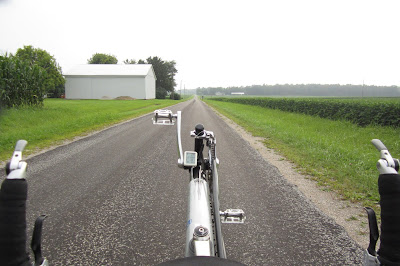 Last night after work I headed west into the flat rural country for a short recumbent ride.  There was nearby thunderstorms rumbling off in the distance but it cleared up enough I decided to risk it.  We've had plenty of rain and the creeks are flowing good. 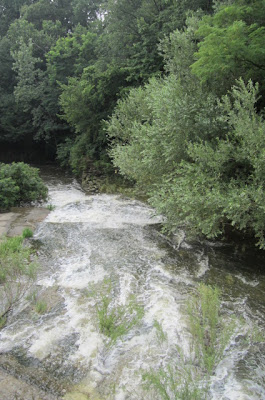 It was an easy ride mainly just to get out and enjoy the fresh country air.  I even rode in my jean shorts, polo shirt and work shoes.  Regular pants aren't much fun on rides over half and hour or so especially on an upright bike but on the recumbent most street clothes function perfectly.  Sometimes it is nice to just go for a ride without getting suited up in the cycling costume. 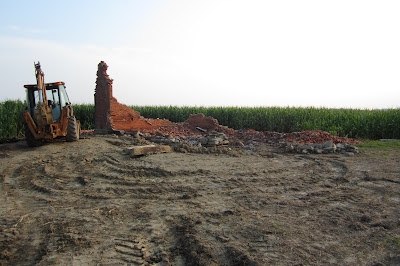 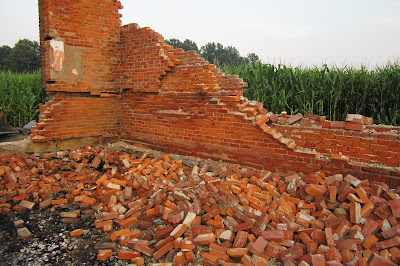 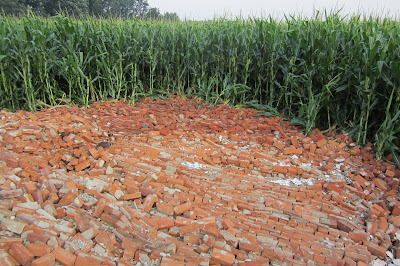 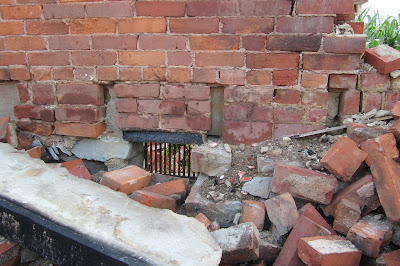 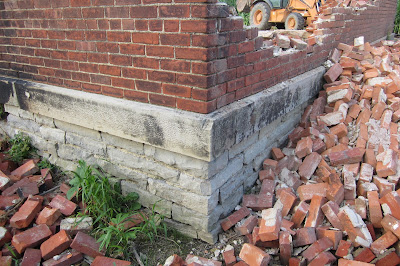 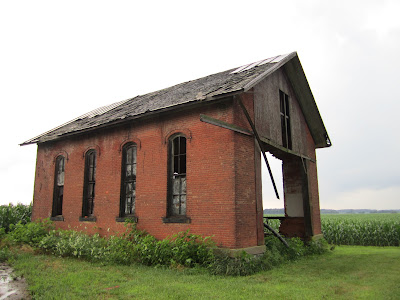 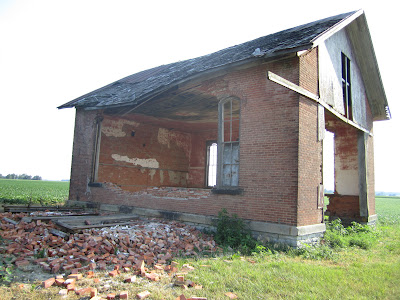