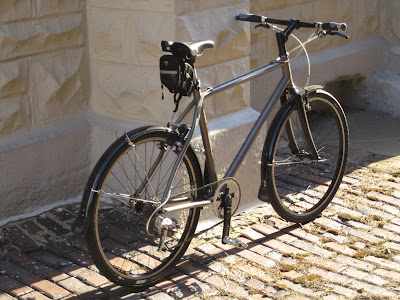 I'm getting back into the swing of things after taking last week off and going on vacation with my family.  It's always tough heading back to work after some much needed R&R but the bicycle always seems to work its magic and makes it just a little bit easier.  I rode my bike to work four out of five days this week.  I drove the car once because I had some boxes and other stuff to transport.

I've been kicking around the idea of buying a cargo trailer to expand my ability to portage bulkier items that just won't fit in my backpack.  The other day I had to make a quick run to the grocery store which is only about mile from my house.  I had to drive the car because I had to get a gallon jug of milk, orange juice and some other odds and ends.  Together it was too much stuff to carry on my back and a cargo trailer attached to my bike would have made it a piece of cake.  As far as the car is concerned from a mechanical standpoint I've talked to mechanics who say that an automobile needs to be run a minimum of eight miles just to bring the engine up to normal operating temperature.  Driving short trips and shutting the motor off allows harmful and corrosive compounds to build up in the engine that would otherwise be flushed out by a longer period of operation.

I like the idea of a trailer that I can disconnect from the bike and hang on the garage wall when I don't need it as opposed to a big heavy cargo type bike.  Earlier this week I got a Nashbar catalog in the mail and I noticed they had their cargo trailer on sale for just over a hundred bucks.  Think about it this way:  How long does it take to burn through a hundred dollars worth of gas.  The reasons to ride more and drive less just keep stacking up.
﻿
Posted by recumbent conspiracy theorist at 7:01 AM 5 comments: 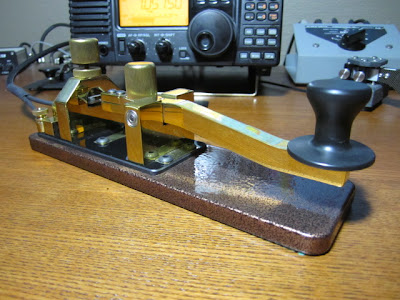 During the summer months my amateur radio activity usually slows or is even non-existent at times.  When it's warm outside that is where I like to be.  The lack of ham radio related posts on the blog bears this fact out.

After a few weeks away from my basement ham shack I do start to get the urge to transmit some signals into the ether.  The SKCC Week End Sprint is always scheduled for the second Sunday of the month and luckily I had no obligations so I had a blast working stations around the country with my wireless setup.  Using the very fine SKCC NT9K Pro-Pump long lever straight key I jumped right in feeling like I hadn't missed a beat.  As far as straight keys go the Pro-Pump is the sweetest key I've ever laid a hand on.  Even if I haven't touched it in weeks the code just rolls off with machine like precision.

The SKCC club key is based on a world famous Danish design called the Amplidan Model 50713 pictured below.  The Amplidan which has unfortunately been out of production for a decade or so was manufactured by the MP Pedersen Company of Denmark. 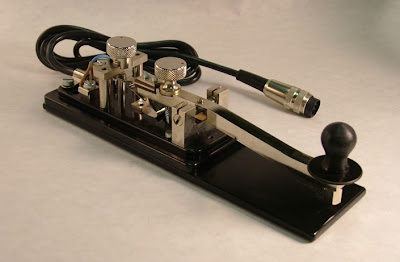 ﻿
You can sure see the family resemblance.  The Amplidan was a professional marine key and a favorite of ship's radio officers from countries all around the world.  These days Morse Code graces the airwaves from one source alone -the amateur radio service.  After using my long lever key for a couple years I can sure understand why this style of key was favored by those whose job depended on well sent code.

Other than the contacts listed above my last radio contact was nearly a month ago and a memorable contact it was.  One day I was simply turning the big tuning knob on my radio listening to various hams transmitting Morse Code on the 40 meter band when I stumbled across a station calling CQ.  (CQ means "calling any station, if you can hear me please respond!") I recognized the call sign N8ZYA which belongs to a ham and fellow blogger named John who lives in Charleston, West Virginia.  I quickly answered and we successfully conducted our first radio contact.  I was very pleased to finally meet John over the airwaves as we have been following each others blogs for a couple years now.

Besides radio John and I share a few common interests like bikes and guitars.  John lives in a historic district and cannot erect an outside antenna on his property so he works strictly QRP (5 watts transmit power) and utilizes indoor antennas for his amateur radio activities.  Because Charleston sits in a valley surrounded by hills on all sides John often jokes that his radio signals are reflected and  amplified by the big gold dome of the State Capitol building not far from his house!  Read about his amazing accomplishments on his blog: http://n8zyaradioblog.blogspot.com/ 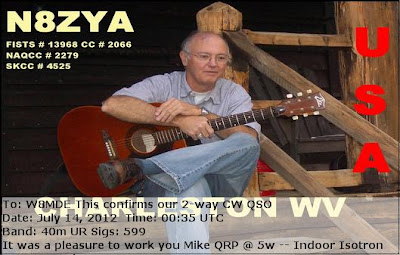 I spent a couple hours kicked back relaxing on my recumbent bike this afternoon.  While I was at it I managed to pedal the entire length of the B & O rail trail north and south logging 36 miles.  The air was moist from recent rains and the temperature only made it into the 60's so it was a great day to be out on the bike.  Trail users were few and far between because the sky was dark with heavy clouds and the occasional sprinkle.  Ideal conditions just the way I like it. 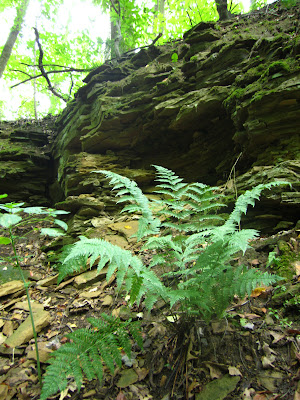 There is just a few places along the trail where Ohio shale is still visible.  The low hills were cut away providing a clear grade when the railroad was built in the 1850's.  After a 160 years the stoney berms are slowly crumbling.  I like these cool shady places. 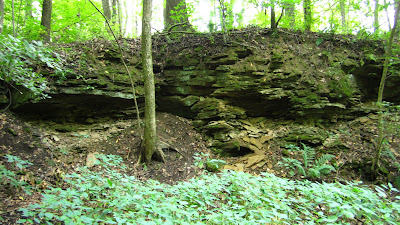 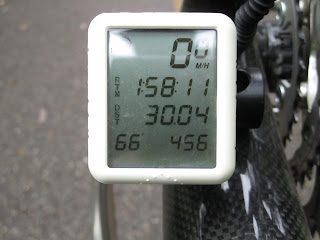 I just happened to look down to my computer at about 29.5 miles and saw that I was going to hit 30 miles in just under two hours.  That spurred me on and I spun out the half mile reaching 30 with almost a couple minutes to spare.  I am loving the new Kojaks.  These tires are so much faster than the fat Primo Comets. I can't help but to put the hammer down and boy does it feel good. 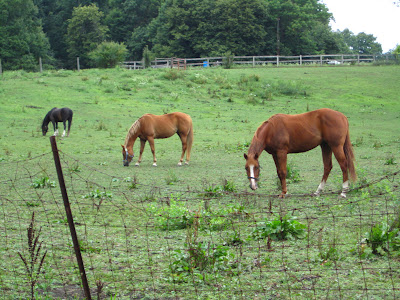 I saw these guys having an afternoon snack of tasty grass.  It's been so dry up until the last few days with a couple rain showers the grass is already starting to green back up.  I bet it tastes better green than the yellow dried up scrub these horses have been grazing all summer. 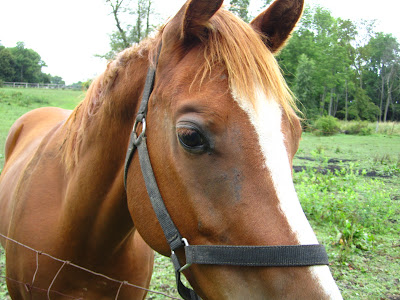 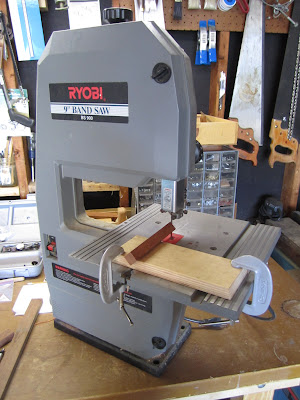 I'm not a big garage saler but when I'm out riding my bike I always slow down a bit and give the yard sales I pass a quick scan for anything that might be valuable or useful.  On a recent road bike ride as I was heading through town I spotted this little bandsaw.  I pulled over to take a closer look and also noted a Dremel rotary tool with it's assortment of bits, burrs, sanding drums and cutoff wheels for ten dollars!  It was late Friday afternoon so I asked the women who were setting up the sale if they would be up and running the next day and if so I would return with the car to buy the two items.

The following day I drove the car over and bought the saw for $25 and the Dremel tool also. The sanding drums and cutoff wheels are worth the ten dollars by themselves so basically the rotary tool was free.  Normally I like to buy new tools to avoid the problem cases and other peoples worn out stuff but in this case I just couldn't pass up two hundred dollars worth of hardly used equipment for $35.

Besides some quick test cuts later that day to verify that the saw worked I haven't had a chance to do anything with it until now.  The extremely hot temperatures have finally eased off so I ventured out to my garage workshop to putter around.  I've wanted a band saw ever since I got into wood working many years ago but it was just one of those things I never got around to.  I have a similar saw at my business that I use occasionally or I made due using a handheld sabre saw.

The first official task for my new band saw was to prep some spindle blanks for lathe turning.  Before I used the Dremel and a cutoff wheel to cut grooves in the end of the stock.  I highlighted that process in a blog post here.

Cutting a precise X pattern in the end of a small stick of wood with a hand held rotary tool is tricky to say the least.  From the moment the cutter touches the wood extreme care has to be taken to keep the cutoff wheel on course and not flying off wildly from the torque of the rotating shaft.  The Dremel cutting discs are actually made of stone-like material so if you hog too much material or inadvertently tilt the tool too much once you've got a groove cut the thin wheel explodes with fragments flying everywhere.  There has got to be a better way and my new bandsaw provides it.

I thought about it for a bit and engineered a V-block that I could clamp down to the saw's bed and align squarely to the blade.  The V-block I made from a piece of hardwood birch plywood using two angled cuts on the table saw to create a V channel.  The plywood is expensive stuff imported from Scandinavia but it is very stable and is perfect for making jigs and fixtures. 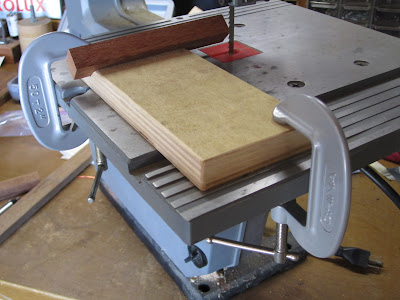 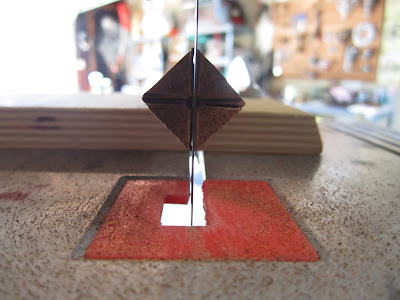 This view from behind the saw shows the dead-on alignment of the blank to the saw blade.  With my hands safely clear of the saw teeth just a slight push forward the blank slides in the V groove and into the blade.  I aligned the groove in the plywood slightly off center to the blade so I can make one cut then rotate the piece 180 degrees and cut again to end up with a wider slot in the end of the wood. 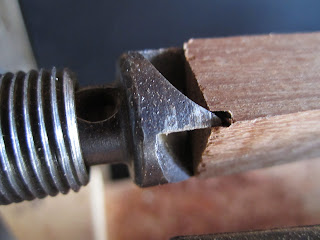 The shot above shows the prepped blank chucked up in the wood lathe.  Notice how the flat of the spur drive closest to the camera lens lines up perfectly with the corner of the stock.  This precise alignment allows me to turn the square shape to round and end up with the largest diameter possible.  If my grooves or end holes are crooked or off center I would have to remove more material as I worked the stock down resulting in a smaller diameter spindle.

I have as much fun problem solving and engineering fixtures to facilitate my production processes as I do working on the actual project.  It must be the German in my blood.

﻿
Posted by recumbent conspiracy theorist at 8:32 AM 6 comments: