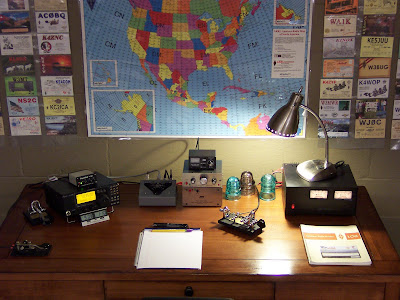 Finally with the snow melted away I was able to get to my utility trailer and haul my oak writing table over to its new location.  This table is heavy and wide and makes a perfect operating surface for my station.  There is plenty of real estate for my notepad, logbook, telegraph keys and associated apparatus plus it looks nice too.  My laptop is not in view but is positioned to the left on a smaller table about six inches shorter comfortably positioning the keyboard.
People always ask "What do you talk about on ham radio?"  My favorite activity is to send out a CQ call or tune around the band until I hear a CQ and answer the call.  Once contact is established a customary exchange of signal report, QTH (my location is) and name are transmitted and logged by each operator.  Some ops like to keep things short with a quick thank you and 73 (best regards) and they are off to the next QSO (radio contact).  Other ops, myself included like to continue the contact.  Most hams love to talk about their gear so we describe our rigs and antenna systems.  Since contacts often span hundreds or even thousands of miles the weather is always an interesting topic.  After that the sky is the limit.  These casual contacts are called "ragchews".  I have had CW and digital ragchews last over an hour.  These conversations are much like the friendly chats you might have with the neighbor leaning on the back fence.  Though in this case its the neighbor in the next state or even the next continent over.
Last Saturday night around 11:00pm I was listening to activity on the 40 meter band.  Around 7.035 MHz I noticed an Olivia mode QSO ongoing between two stations.  One of the call sign prefixes was IZ. This was an Italian station.  Usually when I find a QSO going on I hang around and listen in.  Often another op will come on the air just above or below the frequency of the ongoing QSO and call CQ using the same mode.  I do this quite a bit myself.  There will be another op copying the QSO and he will see my CQ and respond.  After a while the frequency went quiet and I decided to try a sequence of CQ's.  After my second call and to my surprise IZ0GKZ answered the call.  The sound of the Olivia tones were loud and distinct and the signal was bright on the spectrum display.  The operator's name was Massimo and he lives in Rome, Italy.  Like most weekends there were contests going on and Massimo was having trouble copying my signals due to European sideband contesters creating interference at his end.  Massimo sent his email address and asked me to send him an e-mail to confirm the contact.
Here's where the story gets better.  The following Tuesday I participated in the SKCC straight key sprint which is a two hour contest held monthly.  After the sprint I was checking out the band seeing what else might be going on.  Once again I heard the distinct note of an Olivia transmission so I quickly enabled the mode on my software and tuned in the signal.  There was Massimo IZ0GKZ again loud and clear having a QSO with an American east coast station.  I waited until they were done and then called Massimo.  He copied me fine this time and we enjoyed a twenty minute QSO.  The Band was much quieter on his end so he had no trouble receiving my signals.  These two QSO's covering a distance of 4,658 miles are my first DX contacts using the end fed half wave wire antenna.  Basically just a 65 foot long piece of wire strung to a tree in my backyard.  DX means distance. In amateur radio any station outside of your own country is considered a DX station.  Another question people often ask is "How do you understand the foreign operator?"  English is the default language of ham radio and it seems that most operators are fluent in english or at least know enough to get through a basic contact.
I am now into my second year as an amateur radio operator and the thrill of these long range contacts is just as strong as the first time my signals were received across the Atlantic.  To me this is the greatest draw of this fascinating hobby and what keeps me coming back for more. You never know who your going to link up with next and where in the world they might be.
Posted by recumbent conspiracy theorist at 8:29 AM No comments: 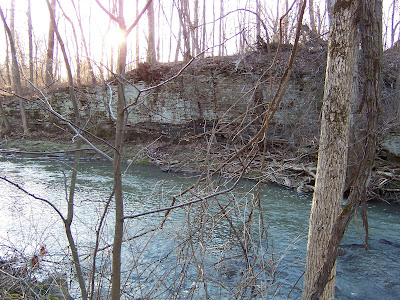 Sandusky River
We had a run of nice sunny days in the 60's.  I got a lot of things done.  Cleaned up the yard and screwed in some tree steps in the maple tree out back for my son.
As a family we go on nature walks and day hiking during all seasons.  In the evenings if short on time there are a couple nearby parks where we can get in a walk or short trail run.  Above is the Sandusky River flowing swiftly at its normal level. The country is still brown and dreary but the sun is warming up and the birds have been back for a week or two.
Sunday I took the recumbent out for its first ride of the season.  I ride on the B&O trail that runs 18 miles between Mansfield and Butler, OH.  For my first trip out I kept the ride not too long at 31.13 miles.  As usual a steady wind was blowing.  Of course it's always the first half of the ride with the wind at your back. Cruising along at 20 mph and trying not to think about inevitable change of course that brings you home and unfortunately right into the wind.  My ride time was 2:28 and the average speed logged was 12.5 mph.  The hp is not designed for speed records but instead for all day comfort.  The bike is running fine and it felt great to be out under the sky.
After comparing my recumbent to my diamond frame bikes in different wind conditions I estimate a 1-2 mph increase in speed traveling into a headwind on the bent.  Not a big deal but you can feel it and the wind noise seems louder than normal for the power applied to the pedals.

Spandex not required.
Posted by recumbent conspiracy theorist at 6:07 PM No comments: 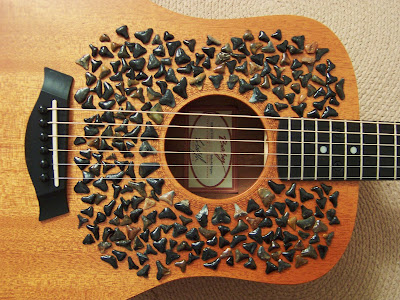 On several occasions my dad and I walked the beaches of the barrier islands and searched for prehistoric shark teeth.  The tides and wave action of the Gulf of Mexico constantly wash up the fossilized remains of these ocean predators.  Because a shark's skeleton is made of cartilage the only part to survive long enough to become fossilized are the teeth.

It took me a few days to come up with a way to display the teeth that we found.  My original thoughts were to use a piece of wood with nice grain and color as a backdrop for my photograph.  On Saturday my wife/best friend LeeAnn took me to see Norah Jones live in Indianapolis.  While enjoying a great musical performance it slowly dawned on me.  The guitar adds a rough idea of scale to the picture and I still get the wood grain theme. Don't forget to click on the image for detailed examination.


The color of the sharks teeth is dependent upon the minerals present in the sediment where the tooth lay buried.  Most of my teeth are black with others being yellow, brown and even a few gray ones. (The shark ones that is.)  I am no shark expert so please take my specifications with a grain of salt.  Sharks have swum the oceans of Earth for millions of years.  The majority of my specimens appear to be Lemon and Bull shark teeth and maybe a few Dusky and Mako.  These examples are probably between 15 and 50 million years old.  A curious observation I have made is that when comparing fossilized remains to present day shark teeth the two are remarkably similar.  No doubt sharks have been around a very long time.  No further evolution necessary. 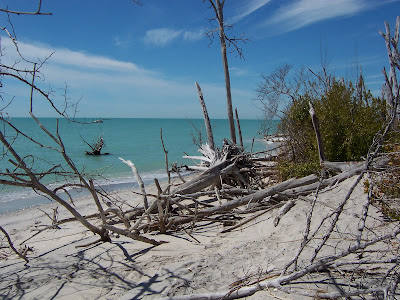 Stump Pass and the Gulf of Mexico
Posted by recumbent conspiracy theorist at 4:24 PM No comments: 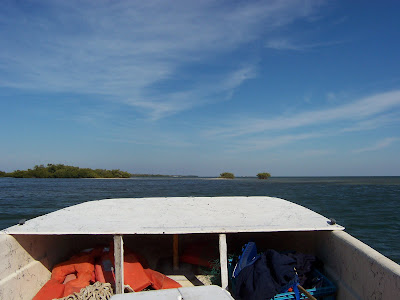 Last week I left snowy Ohio to spend a week with my father in south-west Florida.  My dad's friend Bill introduced me to oyster harvesting.  Although I don't eat this slimy delicacy of the sea, it was interesting to see the process in action. 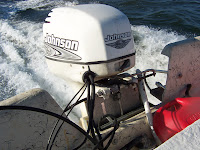 Harvesting oysters is really a simple endeavor and requires only a few pieces of equipment.  The boat we used was a wide flat bottom fishing boat.  A useful feature of this boat is called a jack plate.  The outboard motor is mounted to the jackplate which allows the boat driver to raise and lower the motor vertically while under way.  This set up lets the boat run in very shallow seas with just the prop in the water. 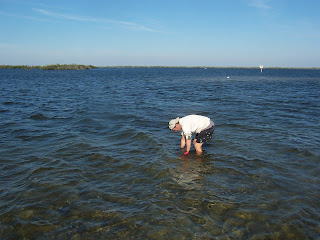 A most important requirement to collecting oysters is knowing where to find them.  After a half hour run we arrived at the oyster bed.  The water was only about 6 inches deep.  The whole area was littered with oyster shells, some empty or broken pieces, and of course live ones.  Reaching around in this rubble you can tell the live ones by their weight.  Another essential piece of gear is gloves for your hands as everything that rests in the sea water is eventually covered in barnacles.  Barnacles are small shellfish that attach themselves to rocks, pilings and ship bottoms.  Their shells have a very sharp edge. 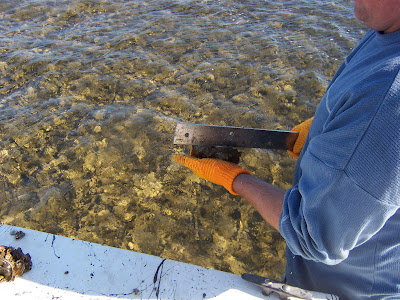 Oysters are brought back to the boat where a heavy piece of steel is used to chip off the barnacles and other debris.  After about a half hour of gathering we filled a 5 gallon bucket with fresh oysters, covered them with ice, and headed back to the marina with our catch.
I like to imagine this is a more traditional method of harvesting shellfish for food.  My trip might not have been much different from 200 years ago except probably the use of sail power to get to the oyster beds. Oysters served in restaurants are raised on commercial farms where the shellfish are constantly turned or raked to prevent the build up of barnacles.
The Gulf Coast of Florida is teeming with life.  Even in March (end of the winter season) one can observe many types of birds, fish and reptiles.  The region is definitely a sportsman's paradise.
Posted by recumbent conspiracy theorist at 8:38 AM No comments: