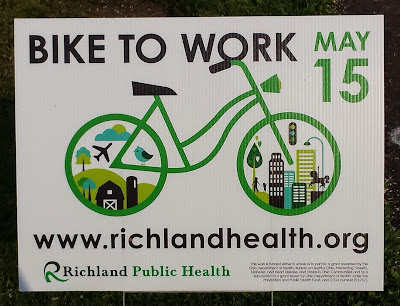 I spotted this sign along the bike path the other day.  The art is very well done. I like how the artist tied in the themes of country and city.

Well as far as bike to work goes for me and many other bike commuters every day is bike to work day.  So I'll just roll my eyes and keep my comments to myself.  But the bottom line is any advocacy to get people out of their cars and onto bikes even for a day is a good thing and I support it.

Here's a great Time article that sums it up quite nicely. 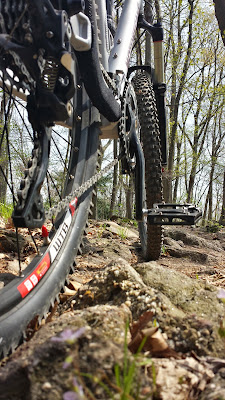 It's been a while since I felt the pulse of Mother Earth through my knobby tires. I couldn't wait any longer so this morning I loaded up my mountain bike and hit the trail.  Every spring I like to ride the mountain bike trail at Mohican State Park.

This place never fails to recharge my batteries.  While I stay in shape doing other things in the off season I'm from the flatland so busting out of the gate and flogging myself up and down these hills transports me to another place. 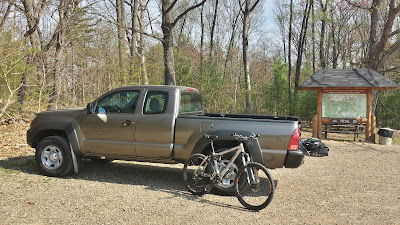 Speaking of transports in this picture is my new internal combustion powered four wheeled recumbent with 5-speed manual transmission (I like to decide when to jam the gears of whatever contraption I happen to be piloting.) and cargo box.  Toss the bike in the back and secure it with a bungee cord to keep it from bouncing around and I'm off.

Of course I'm concerned for our planet and for that reason and my own good health I ride my commuter bike to my day job and other errands about town as much as possible.  As long as I am able to afford and operate a motor vehicle I will continue to use one for important things like getting to awesome bike trails. 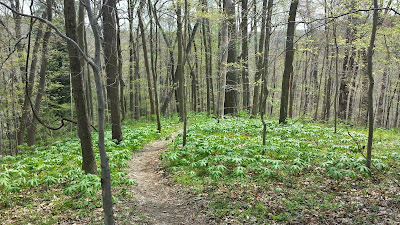 I've been trail riding since the early nineties.  One thing I've noticed about climate change in my region is the spring-time is much drier. This makes for excellent mountain biking.  I'm sure I've been mentioning it before that the trails are dusty dry this early for several years in a row now.  I can remember waiting out the muddy season not only to prevent damage to the fragile ecosystems but to save the head ache of cleaning mud from my bike and accelerated wear of drive train parts from what is basically liquid sandpaper. 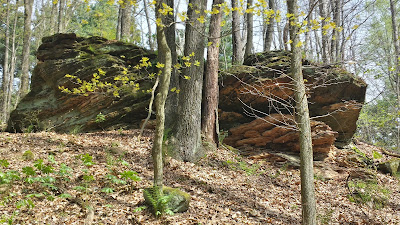 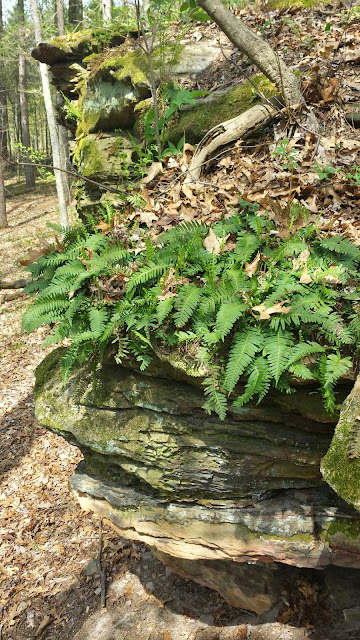 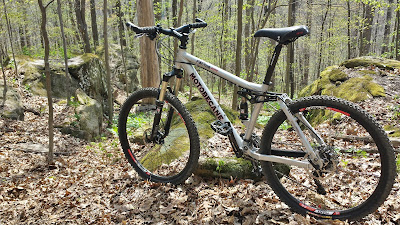 I rode the same route I usually do with the first half being 8 miles from the snowmobile parking area east to the campground on State Route 3.  All was going fine and before I knew it I was cruising on the camp ground road towards the connector trail to continue on back west up the other side of the gorge.

The camp road is paved and flat following the river in the bottom of the valley so for the first time I could shift up to the big ring.  There was major work being done in the campground with heavy equipment of all shapes and sizes and workmen busy on improvements.  The road surface had been ground in preparation for repaving but rolling on my fat off road tires it felt fine.  Suddenly I noticed that the bike was feeling way to hard to pedal as if I was going uphill. I soon realized my back tire was almost flat. This was both irritating and odd as I had just replaced the tube the night before to fix a slow leak that I'd been dealing with since last year.

Luckily I was right near the camp commissary which had picnic tables and shade so that made a perfect place for a pit stop to eat my mid ride snack and fix the flat.  I was also well prepared with an extra tube and my trusty mini pump so shortly I was on my way again.

The path up from the campground starts with a steady two mile zig-zagging climb up to the top of the north ridge of the gorge.  The mountain bike trail "officially" starts at that point but I hate starting my ride first thing with that devil of a climb. I'd much rather face it in the middle of my journey when I'm at least warmed up. 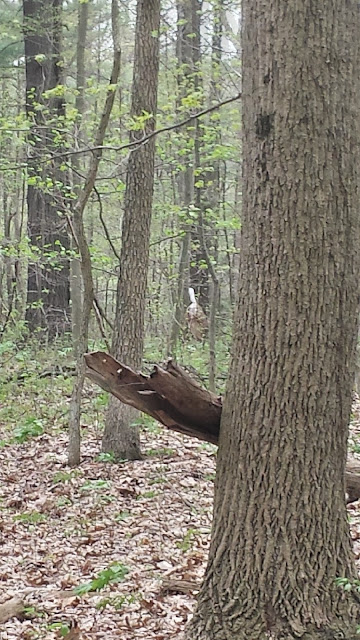 After a few more miles I was feeling pretty beat down and was ambling along a relatively flat section of trail when I suddenly felt the urge almost subconsciously to look to the left.  I didn't think about it just instinctively jerked my head around and instantly locked eyes with a whitetail doe standing perfectly still watching me pass about 30 yards off the trail.

I came to a stop and pulled out my camera and attempted to get a shot off.  Unfortunately in my excitement I forgot that I had the two second timer set. Whether it was the beeper going off or she had simply had enough human interaction the doe turned tail and bugged out.  I did manage to keep the lens on her and after the timer delay I got a shot of her warning flag flying. 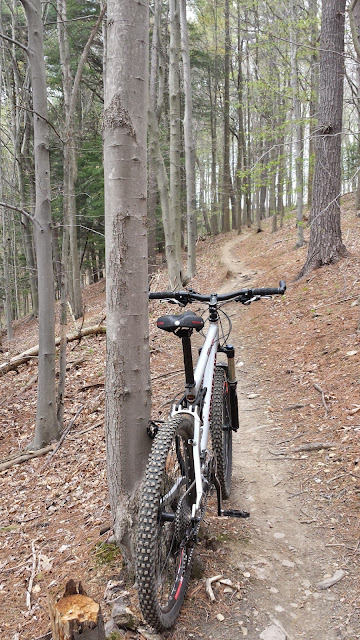 These last couple shots are of an area along the north ridge I really like. The hill slopes down steeply and is covered with Hemlocks. Some older trees tower high above but it is reassuring to see younger hemlocks doing well waiting their turn to one day take the place of their elders. 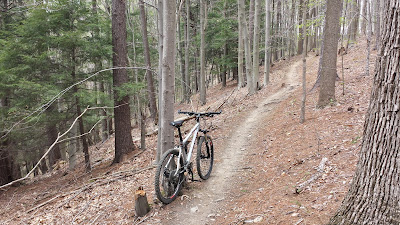 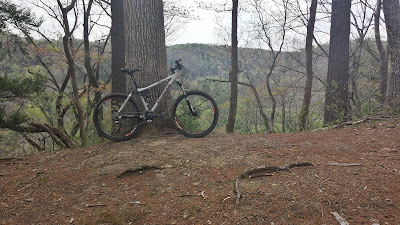 Eventually after 16 miles of single track I used the park road to cross back down and up the other side back to the parking area where I left the truck that morning.  Completely exhausted but with that well earned satisfaction that only a hard day on the trail can give.

I used my smart phone's gps to determine something I've always wondered about while running around in this park: Elevation gain.  I climbed a total of 2700 feet during my ride.

Posted by recumbent conspiracy theorist at 5:53 PM No comments: