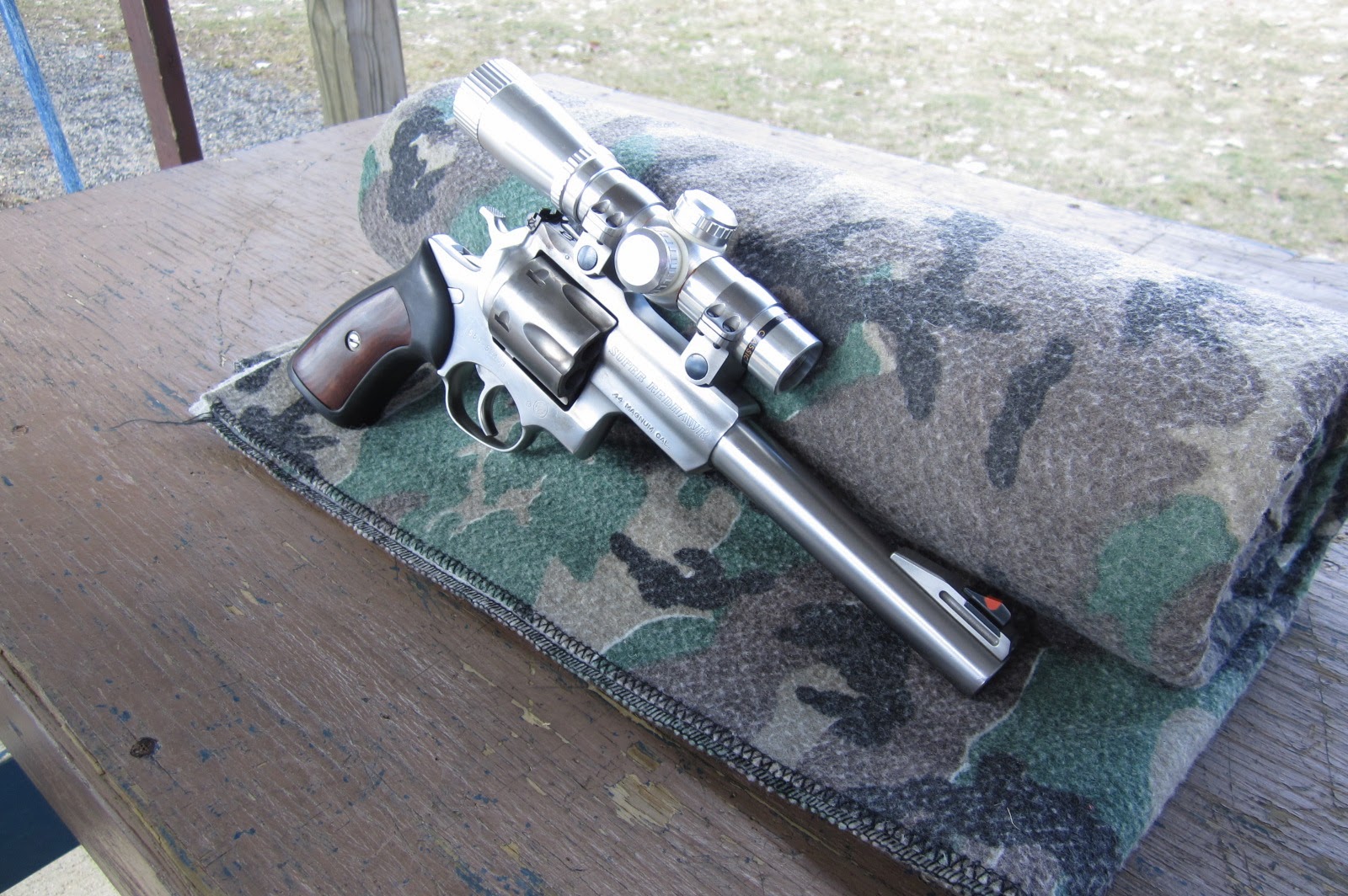 This Ruger Super Redhawk .44 Magnum was first firearm I ever bought for myself.  I've always been a fan of handguns and when this one came up for sale at a great price I jumped.  The Super Redhawk was introduced in late 1987 and is still in production.  Mine is certainly of early production as I became the second owner of this one in 1990. 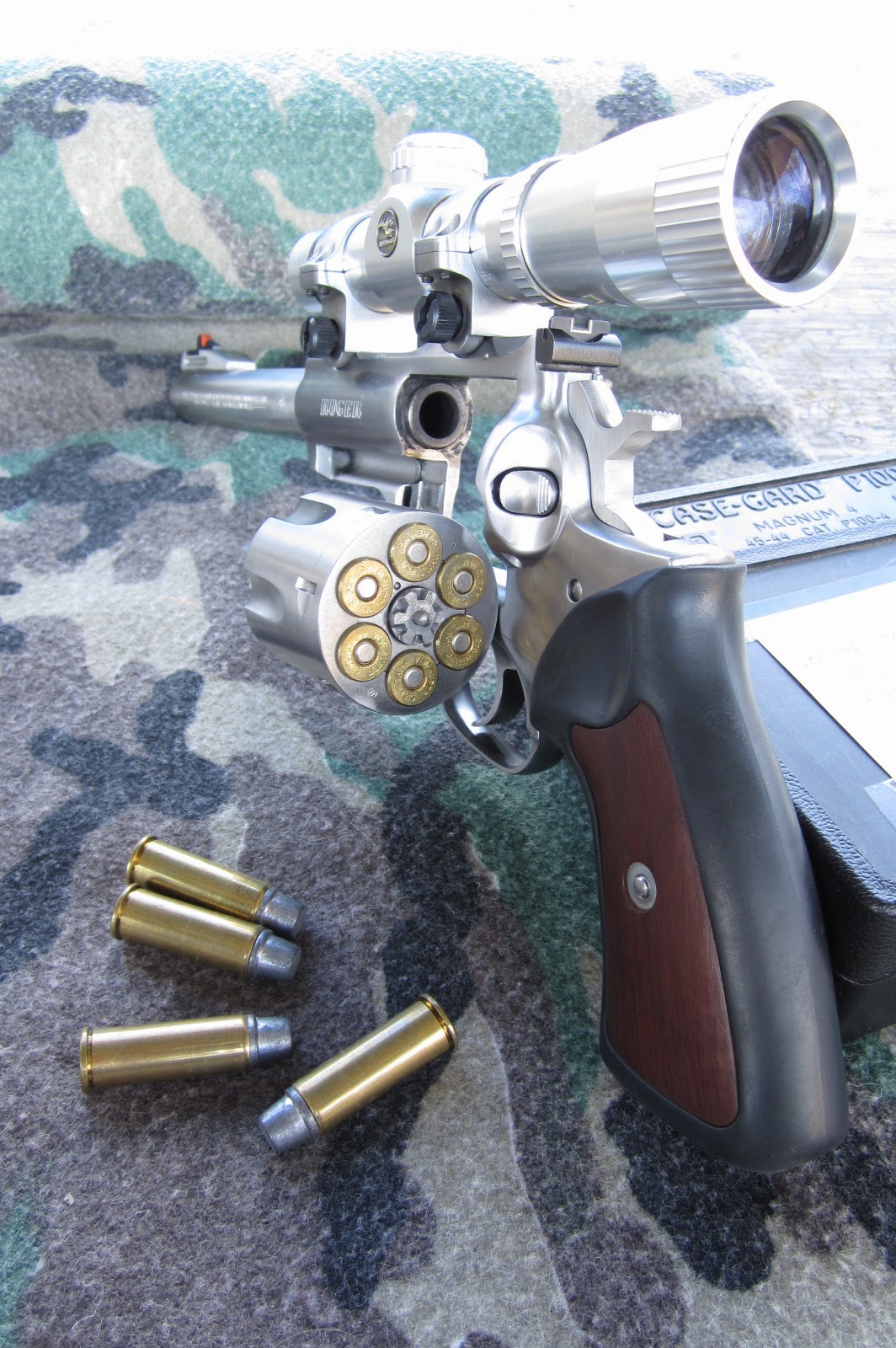 Although this hefty shootin' iron has since been chambered in even more powerful cartridges such as
.454 Casull and .480 Ruger I'm quite content to play around with the .44 magnum even though it's not the king of the handgun hill these days.

This is also the cartridge I first learned how to hand load. In the picture above are a few 240 grain flat nose lead bullets seated over 6 grains of Bullseye powder from a batch I cooked up in 1996.  I had 40 rounds left in an ammo box and figured they have been sitting around long enough. 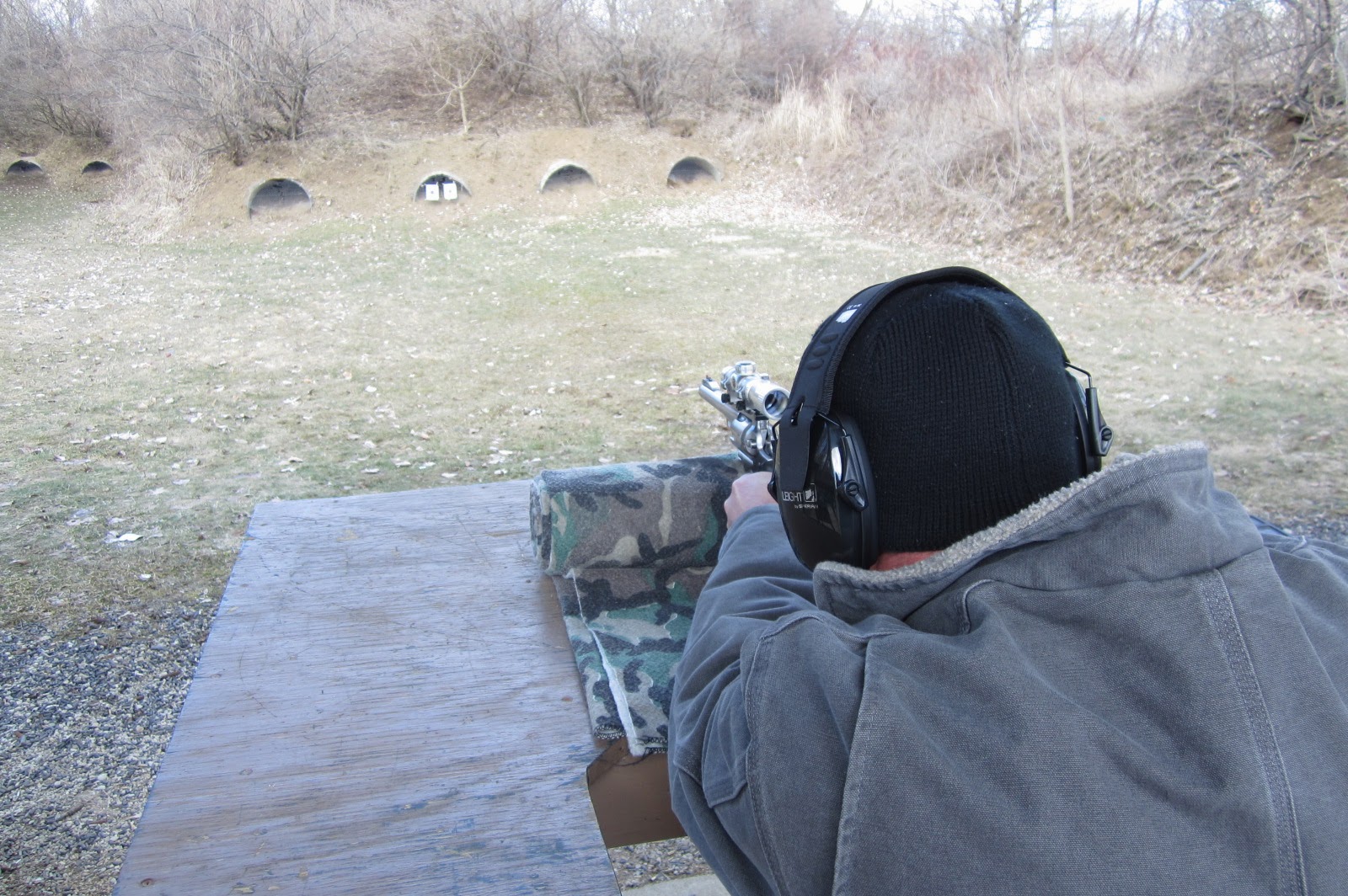 It's been a few years since I had the Ruger out on the range so I was curious to how I would shoot.  I had the scope stored separately from the gun but the Ruger integral rings were still firmly attached to the scope tube so it would also be an interesting test to see how close the optical sight stayed zeroed.
It took five minutes to lock down the rings to the frame of the revolver before leaving for the range.

Shooting handguns accurately is a real challenge.  I like a steady rest to help support the firearm.  My very first shot into the target below was low in the six o'clock position.  The following five shots I was happy to see punch big clean holes in the black. 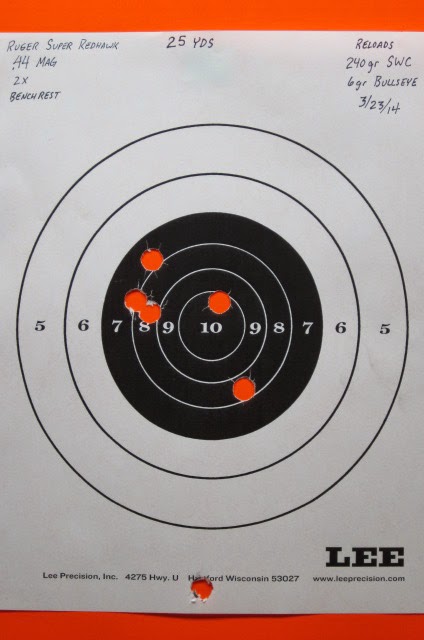 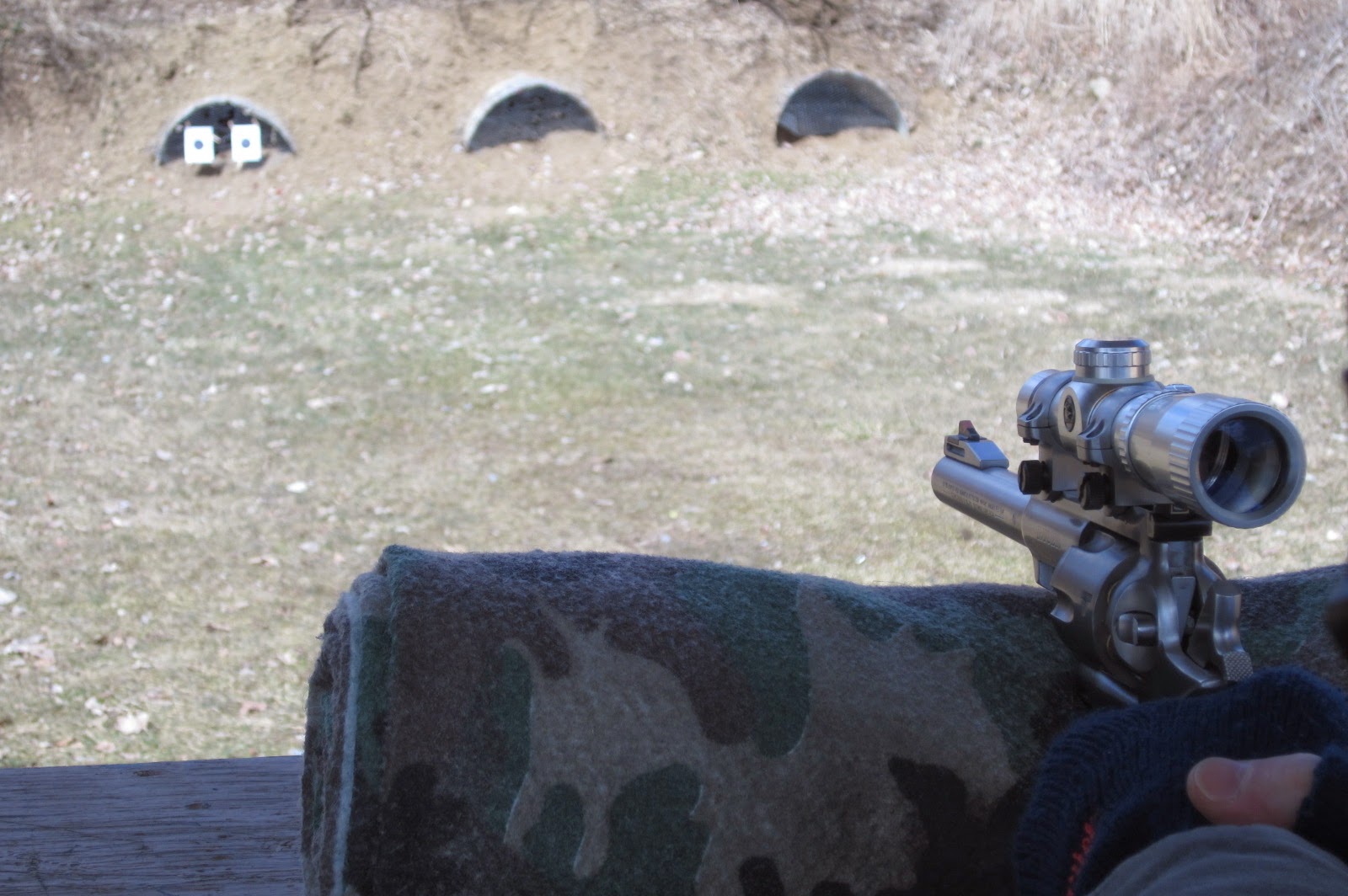 The Super Redhawk is a double action revolver.  This means the weapon can be fired in one of two ways.  The trigger can be pulled through its full range of movement to rotate the cylinder cock the hammer and release the sear dropping the hammer which fires the round.  The second method used for hunting and target shooting where shot placement is critical is accomplished by manually cocking the hammer and slowly and smoothly squeezing the trigger.  In this mode the rearward travel of the trigger to release the sear is much less and the gun can more easily be held steady on target.

When shooting six-guns I always use the single action mode for the best accuracy.  After a few shots to get warmed up I managed this decent group from a distance of 75 feet. 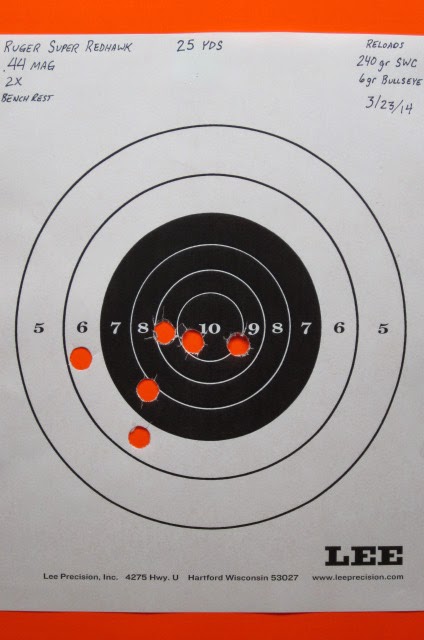 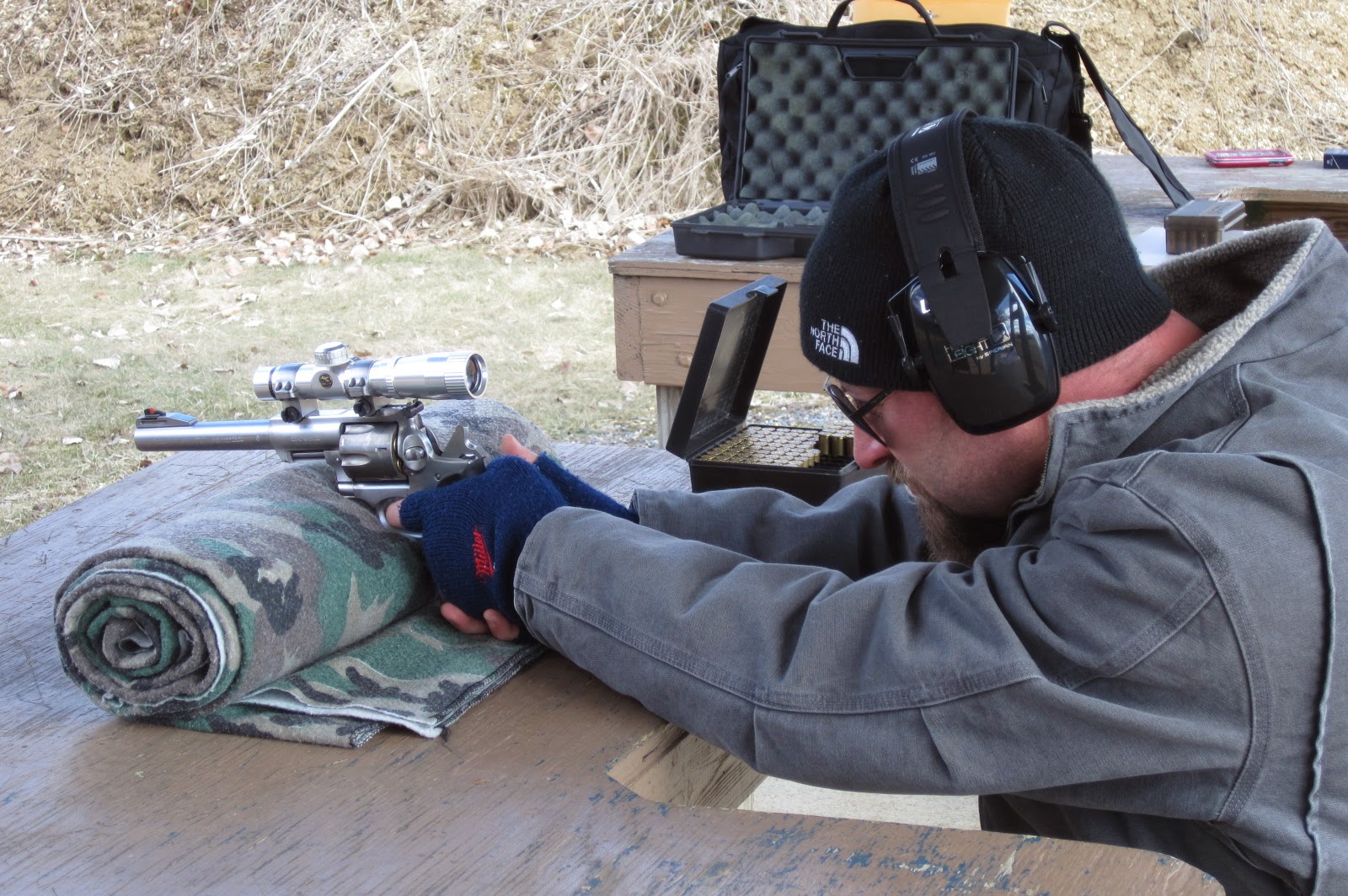 Long eye relief pistol scopes are unique and really improve accuracy at greater distances with a handgun.  Because the eyepiece is at arms length it allows the shooter to keep both eyes open.  At least it works for me and that's how I do it.

My scope is a Nichols 2X. Objects viewed through the tube appear twice their actual size.  Although considered low-end optics this scope has sat atop my revolver for a thousand shots or more over the years and I've never had a single fault with it.

Next to test my marksmanship even more I moved over to the 50 yard range. 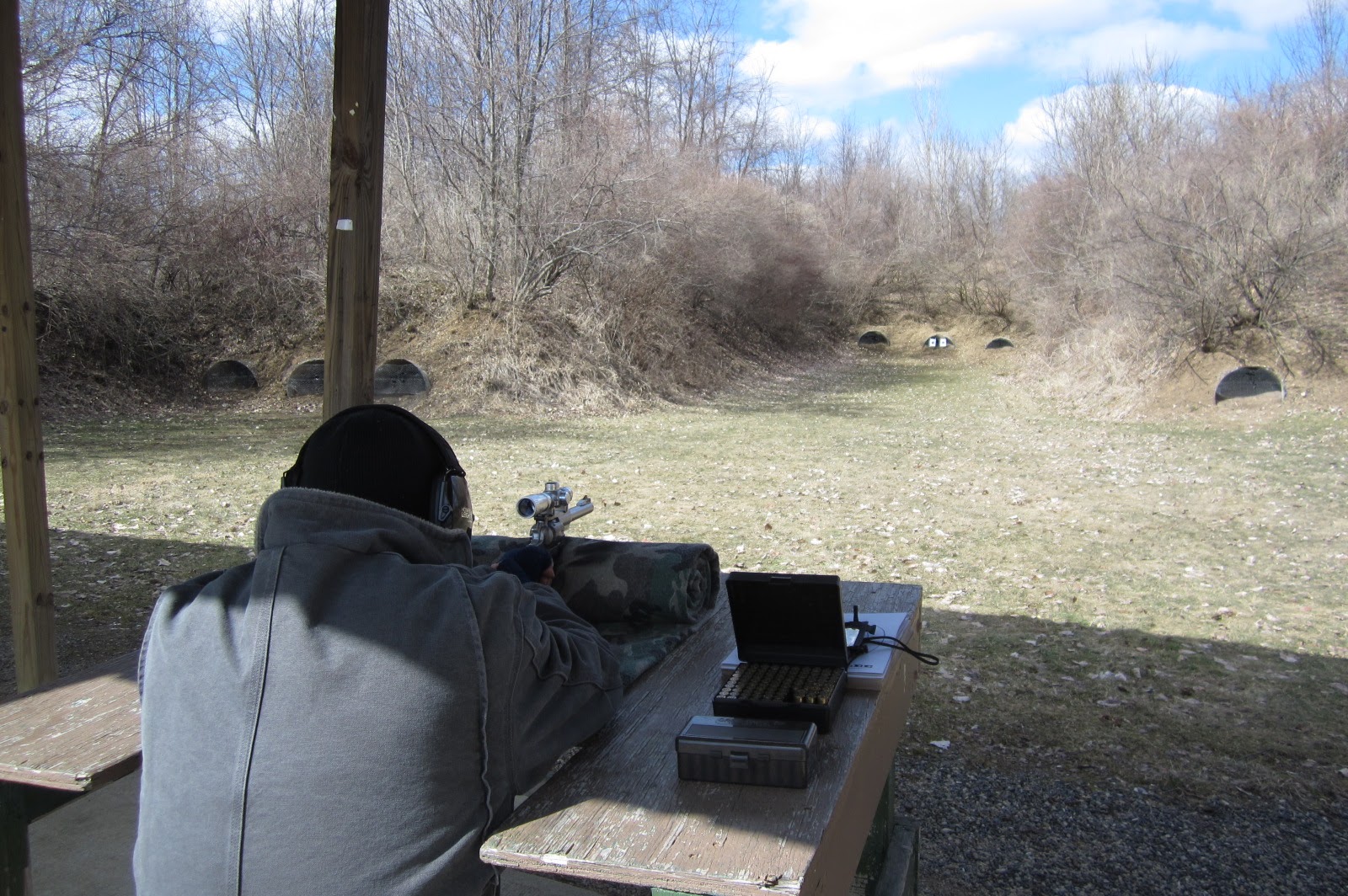 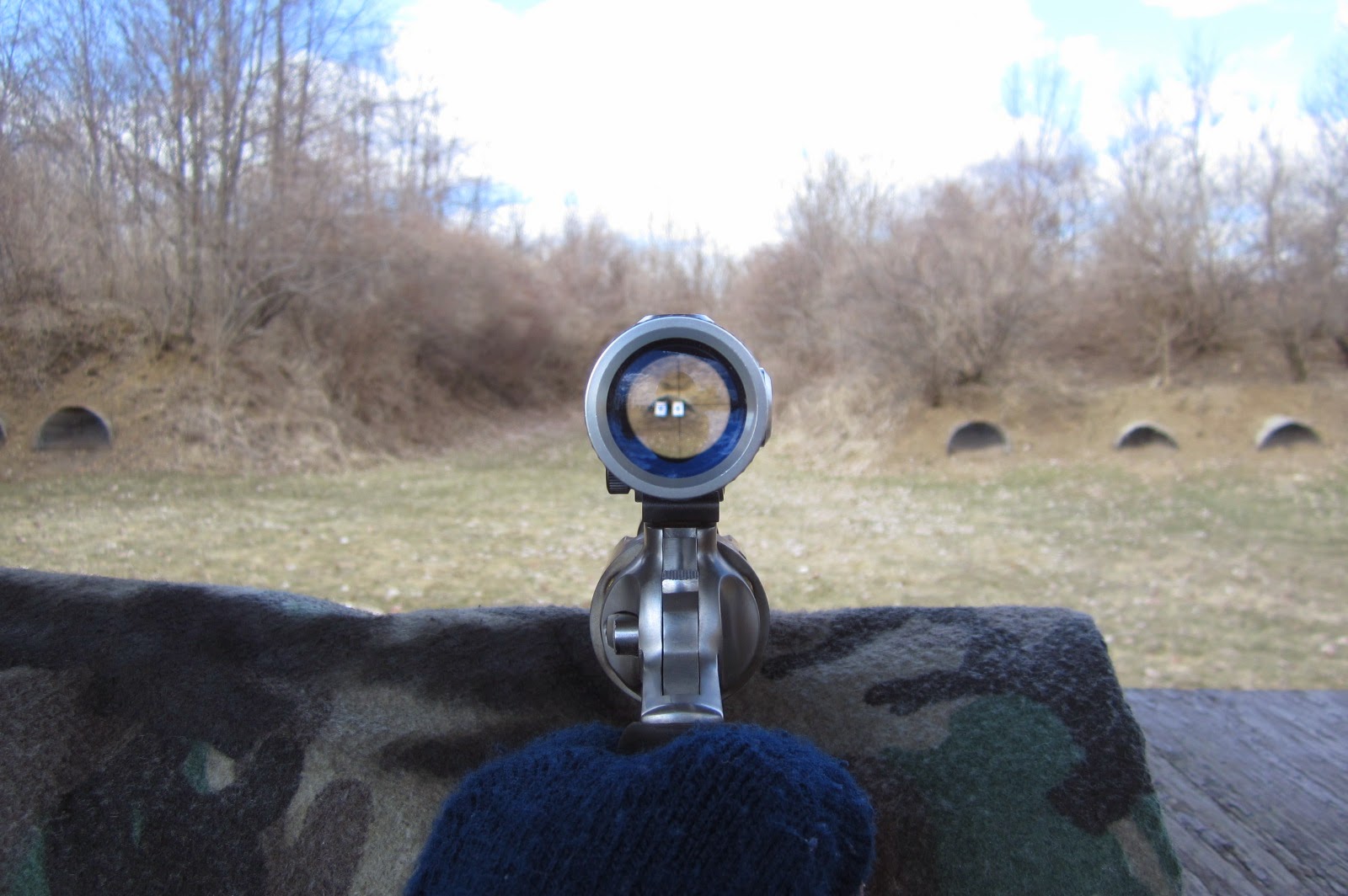 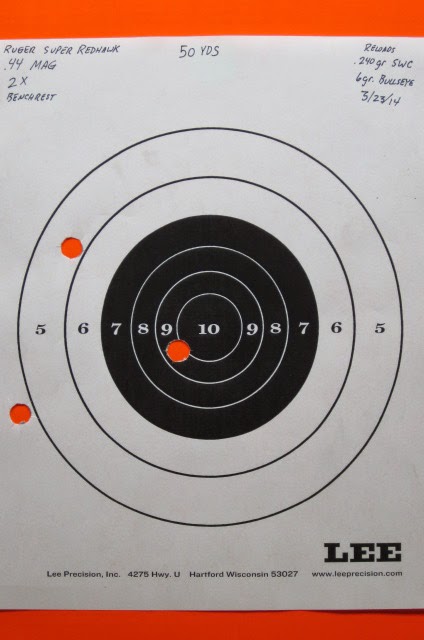 At this distance the left side groupings apparent in the closer targets are exaggerated with half the shots off the paper to the left.  If it ever gets warm out I'll think about adjusting the scope just a tad to see if I can't tighten the group and get all my shots printing onto the paper.  Sounds like a great excuse to do some reloading!

(Thanks to RoadQueen for the excellent firing line photography.) 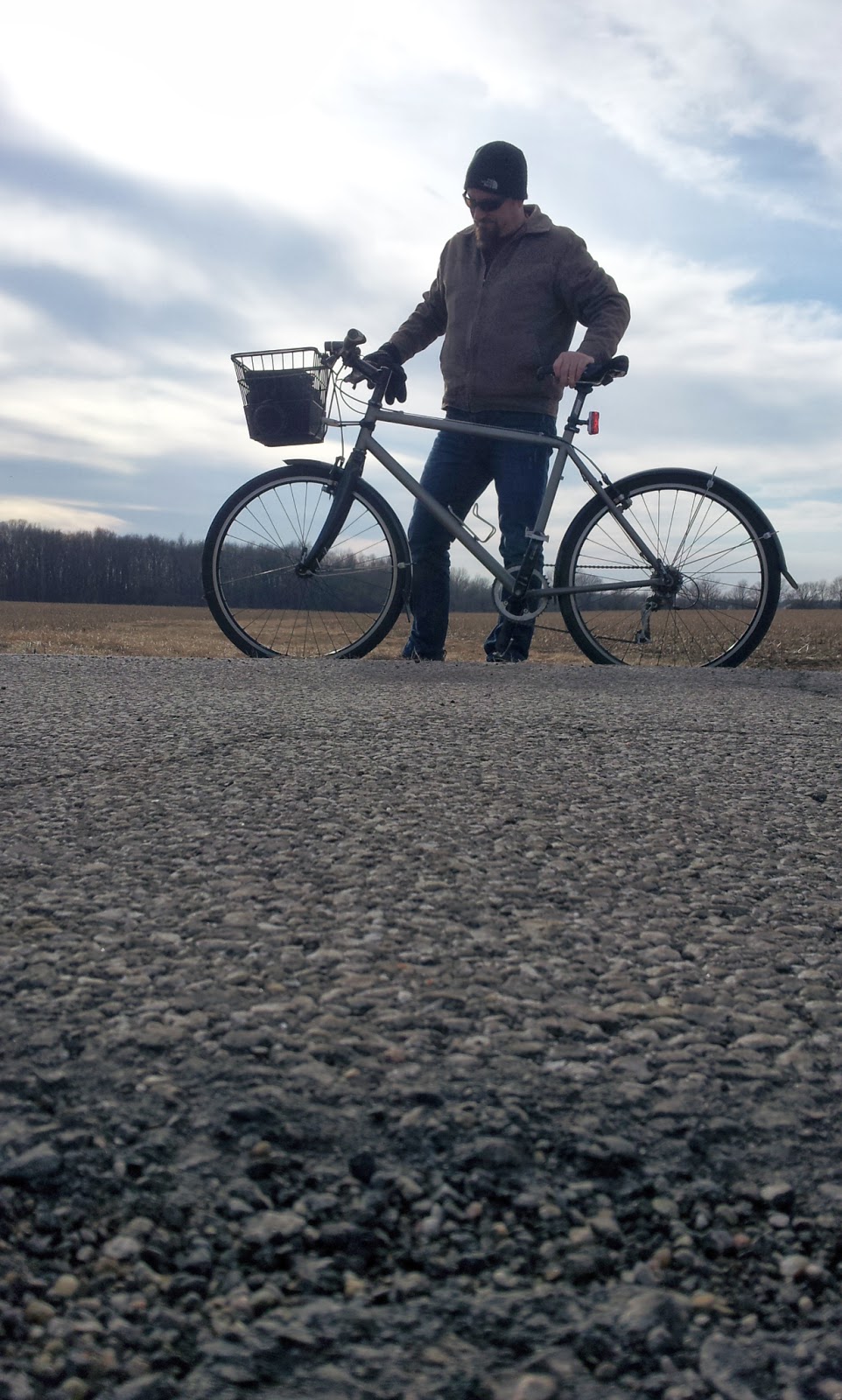 It's slowly getting warmer and I've managed to hit my two bike commute per week quota for three weeks in row now.  This week I'll have three days in commuting to and from the day job.  Yesterday it was 54 degrees F when I left work so I decided to ride a little extra loop out into the country on the way home.  It was probably only six to eight miles and windy as usual but it sure felt great to be out spinning.

I've been itching to get the recumbent bike out on the road but the weather has been so cold I've kept busy in other ways.  At least riding the Ti General Purpose bike around town keeps me somewhat in shape so getting started into a new riding season is no big deal.  I've been longing for some bigger rides in a comfortable seat so I think the recumbent roll out will be soon.
Posted by recumbent conspiracy theorist at 9:33 AM 4 comments: 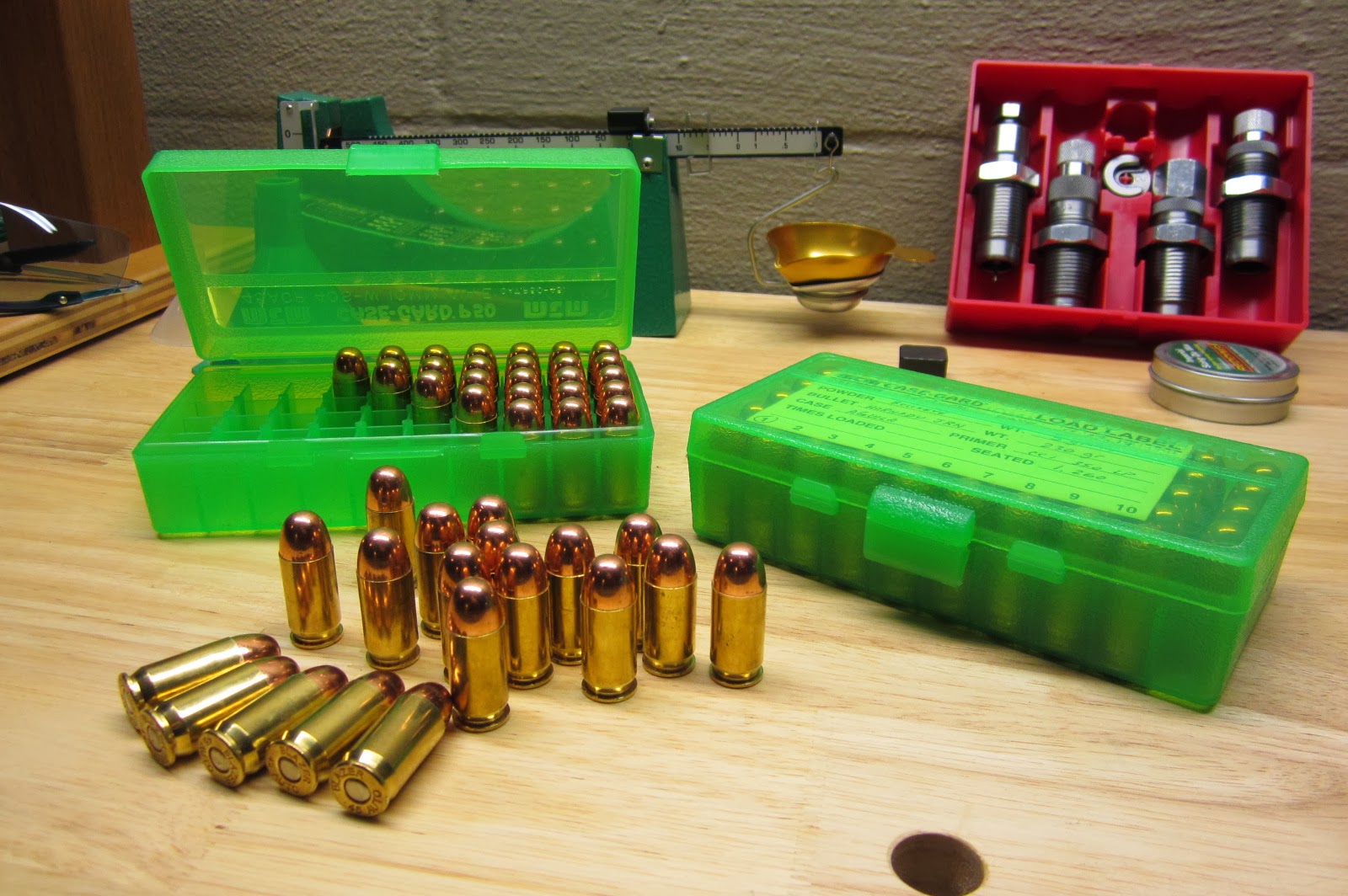 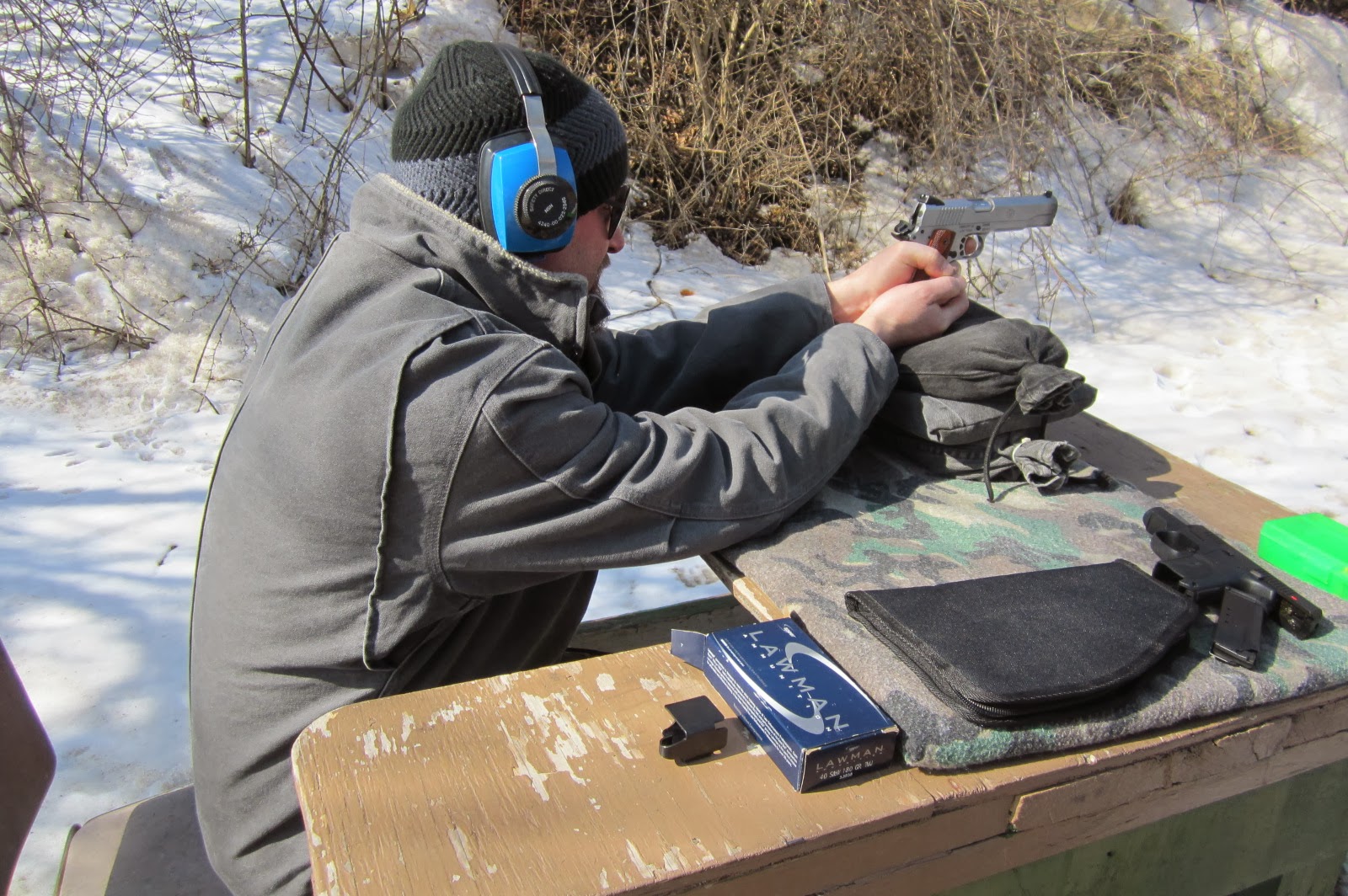 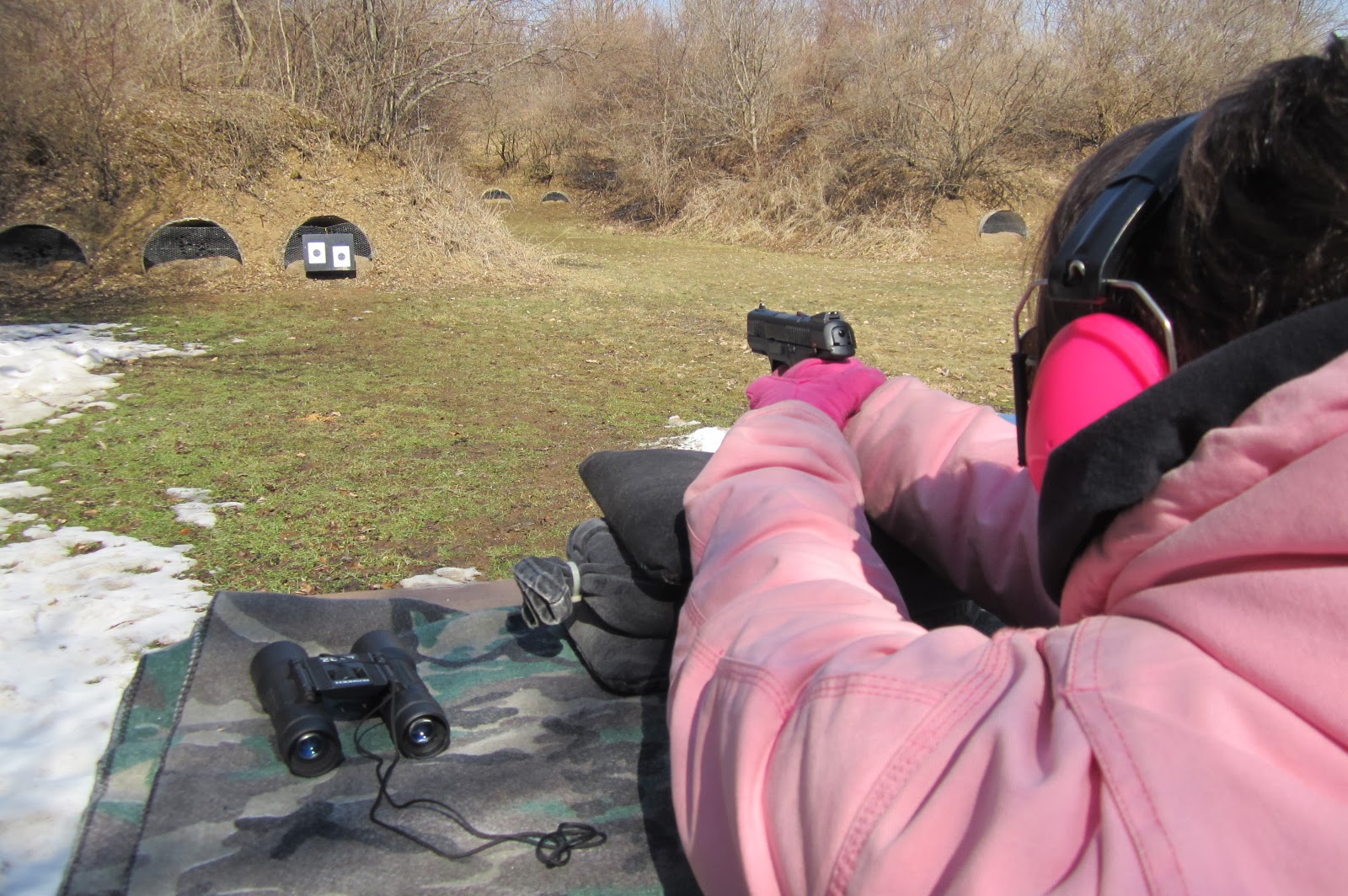 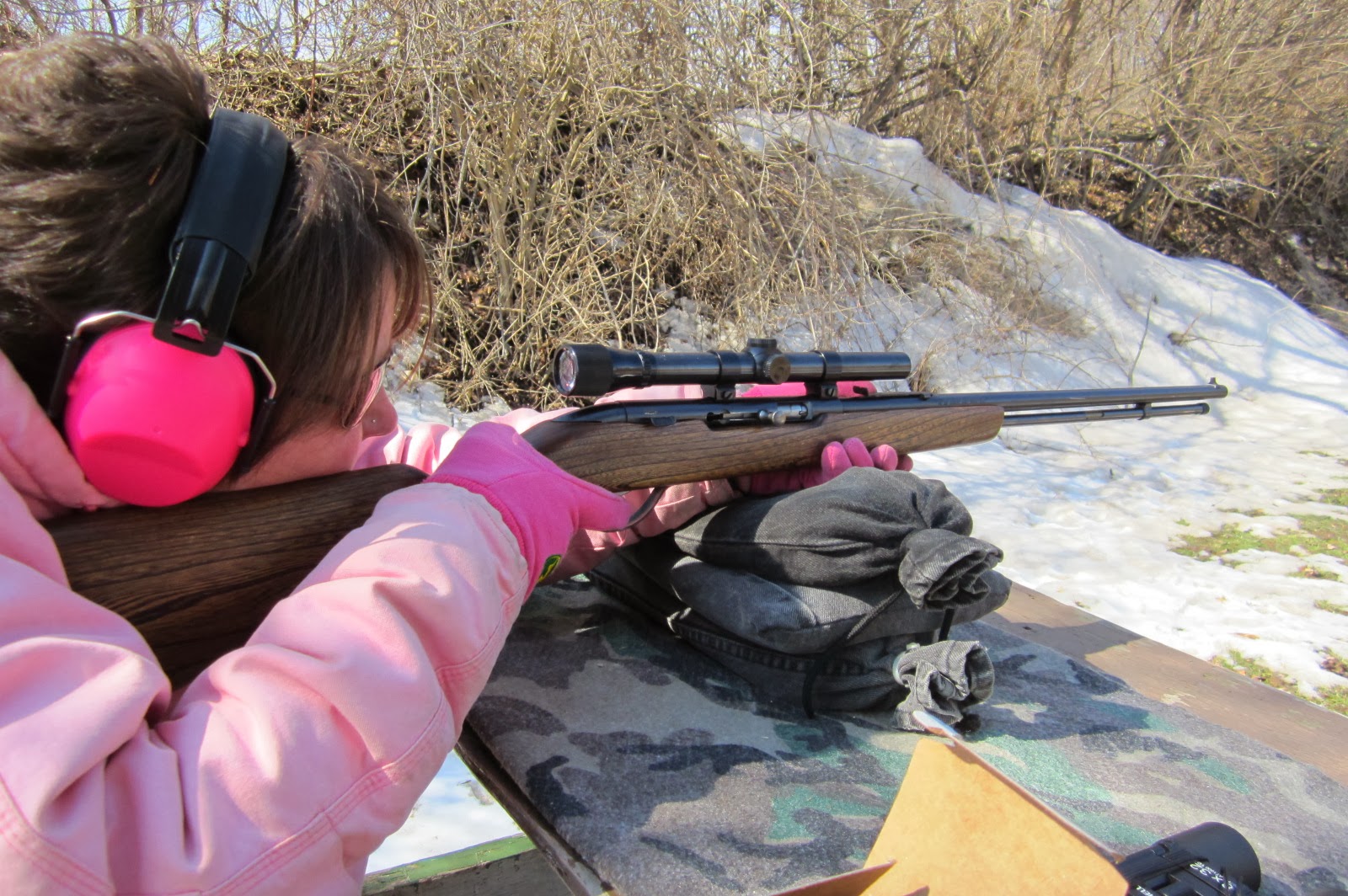 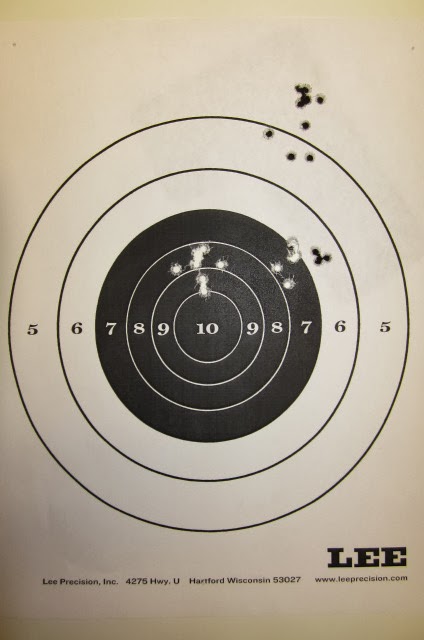 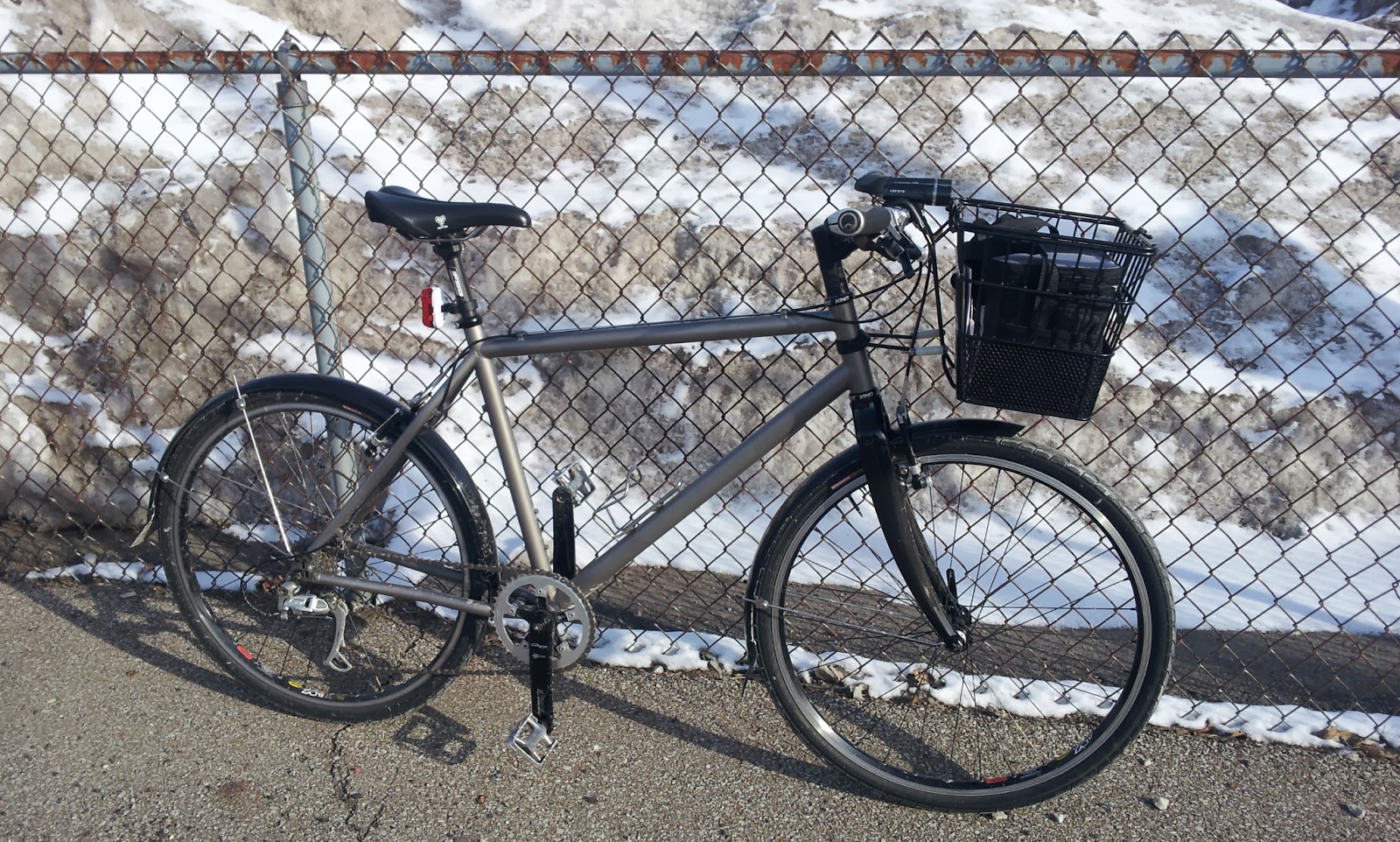 Well it's March now; still cold, in fact 17 degrees F on my ride into work this morning. Huge mounds of dirty snow are still piled up everywhere like so many icebergs.  At least the sun is getting slightly warmer and along with the salt has managed to keep the pavement fairly dry. I'm still wearing my lobster gloves when I ride.  I did bring my lightweight gloves along in hopes that this afternoon it really will be near 40 degrees and I can use them instead.

It's been a tough winter for the bicycle commuter that's for sure but things are coming around.  My commutes by bike so far this year are way down. I rode two days last week and once this week. Still it beats driving the car and soon I'll be turning the cranks around in a more regular fashion.

Posted by recumbent conspiracy theorist at 6:22 AM 4 comments: