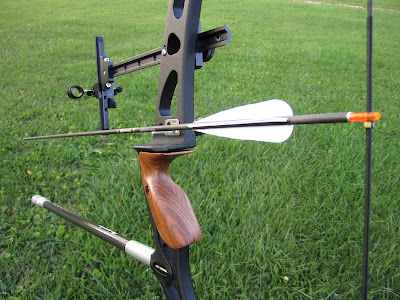 This afternoon after work and school Wyatt and I grabbed our gear and headed out to the archery range.  After a long day cooped up inside getting outside to do anything sure does help.  We've also had two days of solid rain showers here in Ohio making us even more stir crazy.
I've been busy adding a couple upgrades to my Hoyt target bow and have been waiting to get out and do some testing.  The riser (middle handle section) came stock with a black plastic hand grip.  While this grip was fully serviceable it wasn't the most attractive part to look at.  I appreciate wood and as an archer who has made my own bows from wood I like  to have the bow-human interface made of wood.  There is some narrow strips of maple in the limbs but it's sandwiched between layers of glass-fibers and so is rather out of sight.  A little bit of wood that I can feel helps bridge the gap and feel the connection to archers in ages past.
The grip made by Hoyt is called the "Ortho Grip".  It is carved for high wrist shooters with a very narrow throat or the part of the grip that rests firmly in the web of the hand between the thumb and index finger.  This type of grip helps to minimize handle torque by reducing the contact patch between the handle and web of the hand to as small as possible.  In the archery game it's all about consistency and once I start pulling back the string the grip settles into my hand the same way every time. Installation was quick and easy; just unscrew the plastic grip and secure the wood one in place.  Not only does the new one look good it feels terrific.
The second component I changed out is called a sight aperture. Pictured below is the original aperture that came with the bowsight.  It is inexpensive and made of plastic.  What I don't like about it is its small size. The sight window is only about 1/4" diameter and the pin is too fat for my liking.  I was going to purchase a similar aperture but made of steel that was a 1/2" diameter ring.  I figured that would give me a better sight picture downrange and it was only $9.  Unfortunately the one I wanted was sold out so I ended up splurging on a much nicer quality aperture from a company called Titan Scopes. 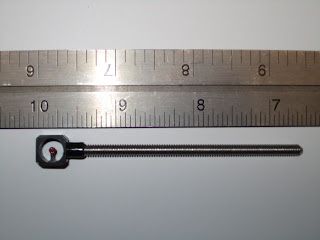 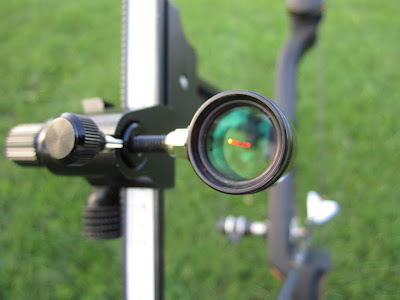 The Titan recurve aperture is 14mm wide and made from a coated Japanese Hoya 0 power lens for the clearest optics.  Why have a lens with no magnification for a bowsight?  The cool part is that a hole is drilled precisely in the center of the lens to hold a .030" piece of fiber optic rod end wise that becomes the sight "pin".  I like this arrangement  much better than the old aperture with its crude stalk and bigger diameter pin.  When I'm shooting at 60 feet the target I'm aiming at is only about a 2 inch dot so I like an unobstructed view.  The fine .030" pin should work even better when I move back start working at the 40 and 50 yard butts.
So how does the new aperture work?  In the following shots is the nock end of an arrow I nearly "Robin Hooded".  The arrow was stuck in the target bale and a follow up shot hit the nock only about a millimeter from dead center between the two prongs.  The V shaped furrow is visible cut into the hard plastic from the field tip as it glanced off to the side. 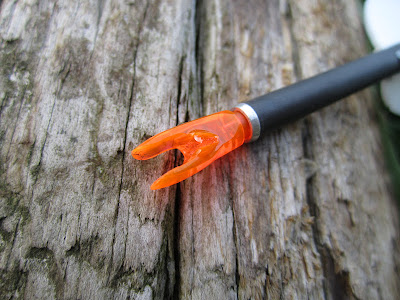 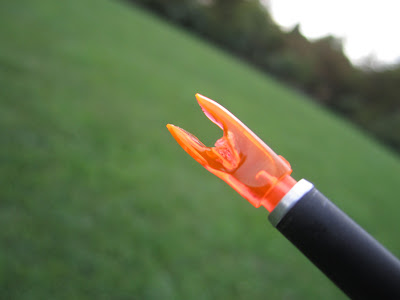 After that I decided to just shoot an arrow or two at each spot. 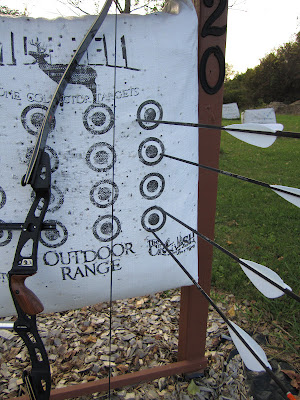 Here is four shots starting from the top right and working down.  The third shot was a little low. 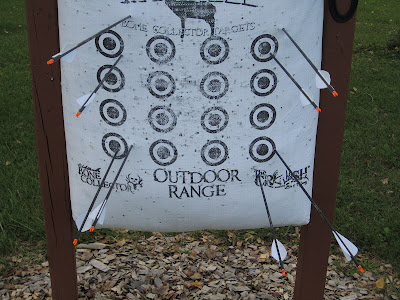 Two shots at each corner spot. 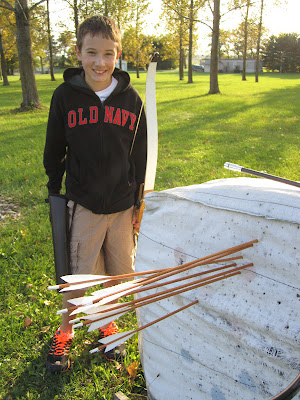 Wyatt likes shooting bare bow with no sights.  Look at this group shot at 30 feet!
﻿
Posted by recumbent conspiracy theorist at 6:10 PM