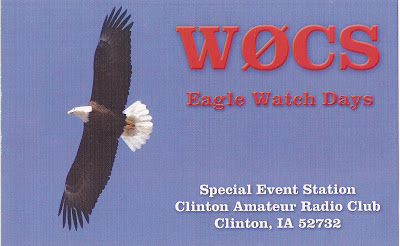 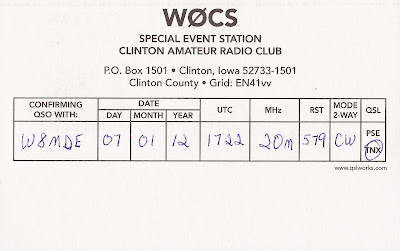 Special event stations on amateur radio all have one thing in common and that is to celebrate a unique person, place or thing.  A special event station can be a single operator working low power (QRP) or a club station working multiple bands and modes.  Events can be a one day affair or month long or longer marathons.  I like making contact with special event stations and always enjoy reading about the event's purpose.  Working these stations is yet another way to learn something new using amateur radio besides the usual name, QTH and signal report exchanged between hams over the air.
I received this QSL card the other day from a successful CW contact on the 7th of January.  The 28th Annual Bald Eagle Watch was presented by the U.S. Army Corps of Engineers, U.S. Fish and Wildlife Service and Clinton Community College of Clinton Iowa.  Naturalists and volunteers set up at Lock #13 along the Upper Mississippi River complete with spotting scopes to aid the public in viewing the bald eagles.  The Clinton Amateur Radio Club ran their event in tandem with the viewing as a great way to spread the word.

From the information page included with my QSL card:

That our national emblem was threatened with extinction in the lower 48 states because of DDT (a type of pesticide) poisoning.  Protection under the endangered Species Act, together with reintroduction programs, brought populations up, and the species was reclassified as Threatened in 1995 and they were delisted in June 2007- a true conservation success story.

There are eagles all over the world, but the American Bald Eagle only lives on the North American Continent.  The Bald Eagle is not bald it develops white head and tail feathers around the age of four or five.  They stand a height of 2-1/2 to 3 feet tall and weight about 10-14 pounds.  Their wingspan is 6-8 feet.

Engages in spectacular flight displays.  In the Cartwheel Display, a courting pair flies to high altitude, locks feet together, and then tumbles and cartwheels toward the ground, breaking off at the last moment."
Posted by recumbent conspiracy theorist at 9:29 AM