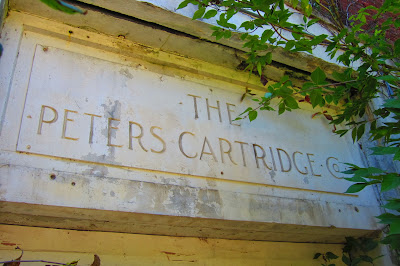 During my recumbent tour of the Little Miami Valley this fall I came upon the remains of this early industrial complex right along the bike trail.  The Peters Cartridge Company operated for about a hundred years along the banks of the Little Miami.  The company produced shotgun shells, rifle and pistol cartridges for both civilian use and government contracts.

I've mentioned before on this blog how I love discovering places of historic import on my bike rides and then learning about the subjects later by reading books and Internet searches.  My short visit to the Peters factory did not disappoint in that regard.  Established in the late 1800's the business worked in conjunction with the King Powder Company located just across the river in Kings Mills.  In the early days before the advent of modern smokeless gunpowder volatile black powder was the only option for propelling a bullet or a wad of shot from a gun.  One of the ingredients of black powder is charcoal and it is said that wood harvested from willow trees makes an excellent charcoal for the creation of black powder.  Years ago I suppose plentiful willow groves along the river were responsible for several powder mills to spring up in the area.

Although the plant closed down for good in the 1950's the Peters legacy lives on to this day.  In the 1930's Peters sold out to the Remington Company which used the facility to assemble smokeless munitions up through World War Two.  At that time Remington decided to concentrate its manufacturing elsewhere and operations at the Peters plant soon came to an end.

As a shooter and cartridge reloading hobbyist myself I have always wondered what the R - P stamp stood for on the heads of my brass casings.  Easy enough to reason that the R is for Remington but had it not been for my bike ride down into the south western corner of Ohio I may have never discovered what the P meant. 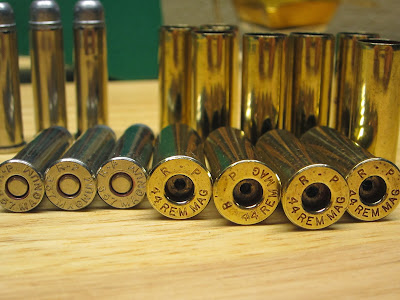 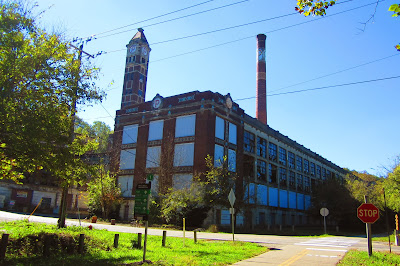 The brick buildings shown in my photographs were built in 1916.  Originally the work was done in wood frame structures and once the business was well established the facility was upgraded.  Obviously the tall smokestack was used to vent gasses from the furnaces but I wasn't sure what the purpose of the tower was.  I thought maybe it was a quiet place where Mr. Peters could take his special guests up so they could look down over his little empire.

Well I couldn't have been farther from the truth.  The tall structure is called a shot tower.  Inside was a shaft through which molten lead would fall and cool after passing though a screen resulting in the lead shot that would then be loaded into shells.  The little round spheres would land in a pool of water at the base of the tower fed by a small stream diverted to flow underneath the factory. 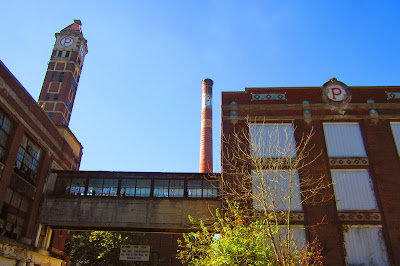 I love the style and flair of the architecture of that era.  Check out the tiled P logo that adorns the tower and main building. 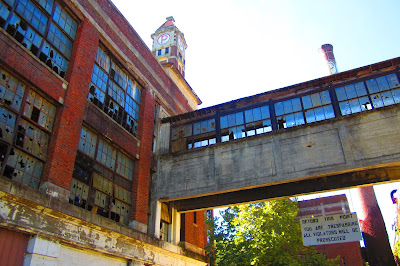 Parts of the facility are leased out by the current owners for industrial purposes and the site has been used for other purposes over the years.  Police training takes place on the grounds and for a few years a haunted house display was operated in one of the buildings.  I also read that a low budget horror film was even shot on the location.

Here is a great newspaper article from 1890 that details the hazards of working with black powder back in the day:

TERRIFIC EXPLOSION OF POWDER.
A CARTRIDGE FACTORY BURNED AND SIX PEOPLE KILLED.
CINCINNATI, Jul 1 -A terrible explosion occurred late this afternoon at King's powder mills, on the Little Miami railroad, twenty-nine miles east of this city. Six persons were killed and a dozen or more seriously injured. Two empty freight cars were being rolled on to the side track where a car containing five hundred kegs of gunpowder was standing. As the cars struck there was a terrific explosion, and immediately afterwards a car containing eight hundred kegs of gun powder exploded, making thirteen hundred kegs altogether. WM. FRAULY, a brakeman, in the service of the Little Miami, was standing on one of the empty cars when the explosion occurred. His body must have been blown to atoms, as no trace of it has yet been found. Five other persons, supposed to be employes of the powder company, were killed. The King Powder Company and the Peters Cartridge Works have works on both sides of the river along the railroad. The explosion occurred on the south side, and the destruction was enormous. There are a number of cottages occupied by the workmen in the powder factory and situated close to the track. These were shattered by the explosion and their inmates injured. Twelve or fifteen girls at work in the cartridge factory were crippled by the explosion. The military station, or freight house, belonging to the Little Miami railroad, together with all the adjacent buildings, were set on fire and totally consumed. The havoc wrought by the explosion of sixteen tons of powder is dreadful. The track and ties of the railroad are fairly torn out of the ground, and a great hole ploughed in the ground. The Peters cartridge factory was burned to the ground and nothing but a mass of smoldering ruins remains to mark the spot where the building stood. As soon as the news reached this city, about 5 o'clock, a relief train was dispatched to the scene of disaster, with SUPERINTENDENT PETERS and a large party of surgeons on board, and relief was afforded the sufferers as soon as possible. The work of searching for the missing and caring for the wounded is now progressing. As most of the girls who were injured, live at Morrow and South Lebanon, it is most probable that they will be taken to their homes in these places. It is hardly possible that any train will return from King's Mills earlier than 10 o'clock, and further particulars will be obtained then. The Peters cartridge factory was a large building, and fully supplied with a great amount of costly machinery, both for the manufacture of shells and the loading of shot gun ammunition, and a large force of employes was at work at the time that the explosion occurred. The news from King's Mills at 9 o'clcok to-night is that ten dead bodies have been taken from the ruins, and thirty are known to be wounded. Definite news is more likely to swell the list of casualties than to diminish it.
The Columbus Enquirer-Sun, Columbus, GA 16 Jul 1890

((I found this and other interesting newspaper articles about the tragedy here.) 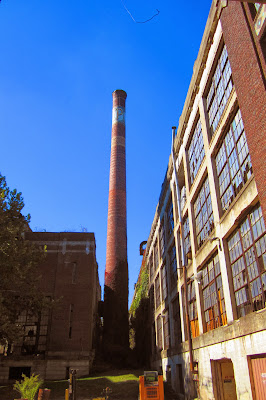 Other links worth a look:

A great collection of photographs of the site here.

Posted by recumbent conspiracy theorist at 9:55 AM