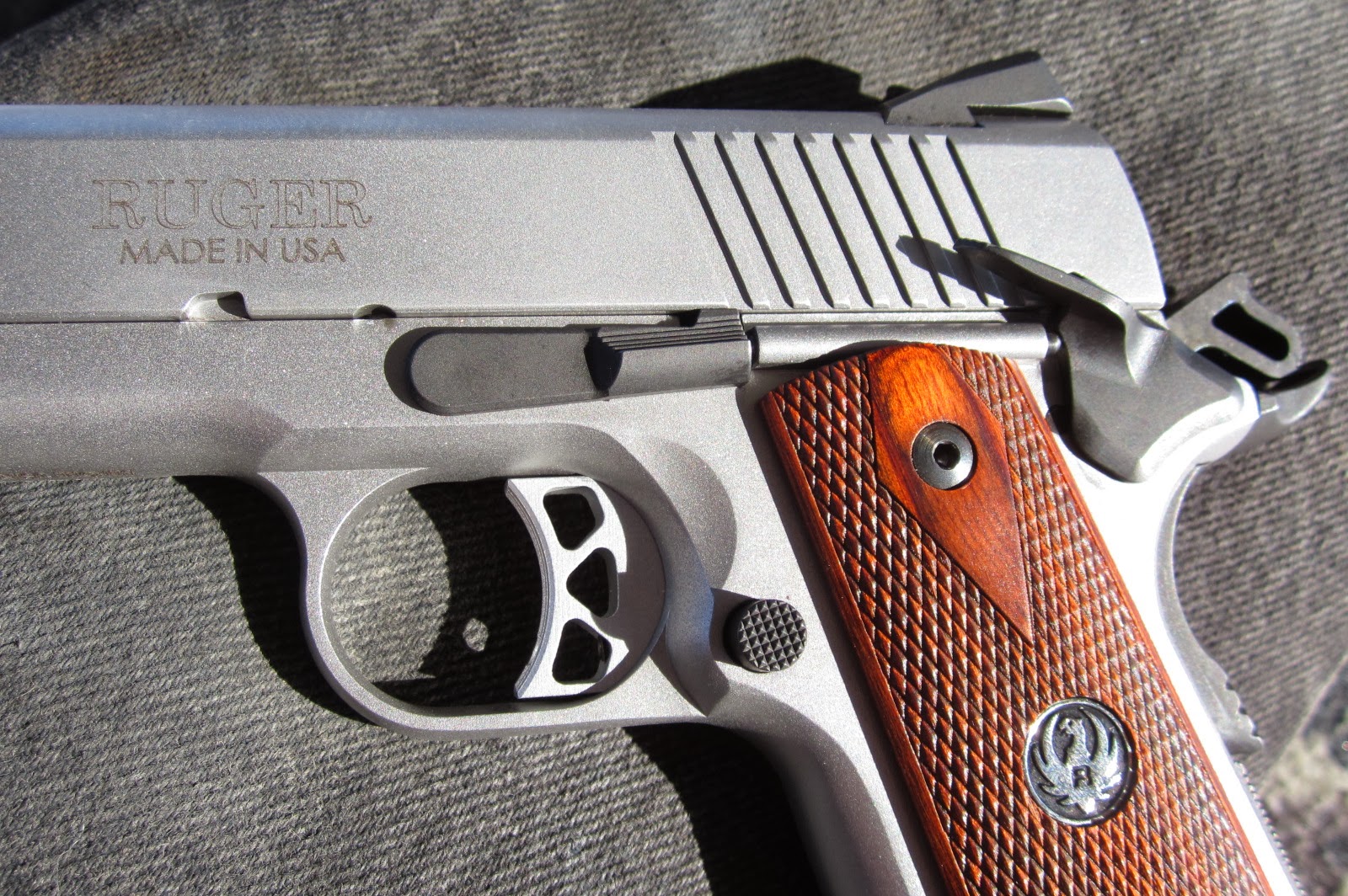 In 1911 the U.S. Government adopted John M. Browning's .45 caliber automatic pistol as the issued sidearm for the U.S. military.  After 70 years of faithful military service and a hundred and thirteen years after its inception the design is still wildly popular.  Probably the most recognizable handgun in the world it has been produced by many manufactures from all over the globe.  Currently the 1911 and its variants are available from a greater selection of manufactures and price ranges than ever before. 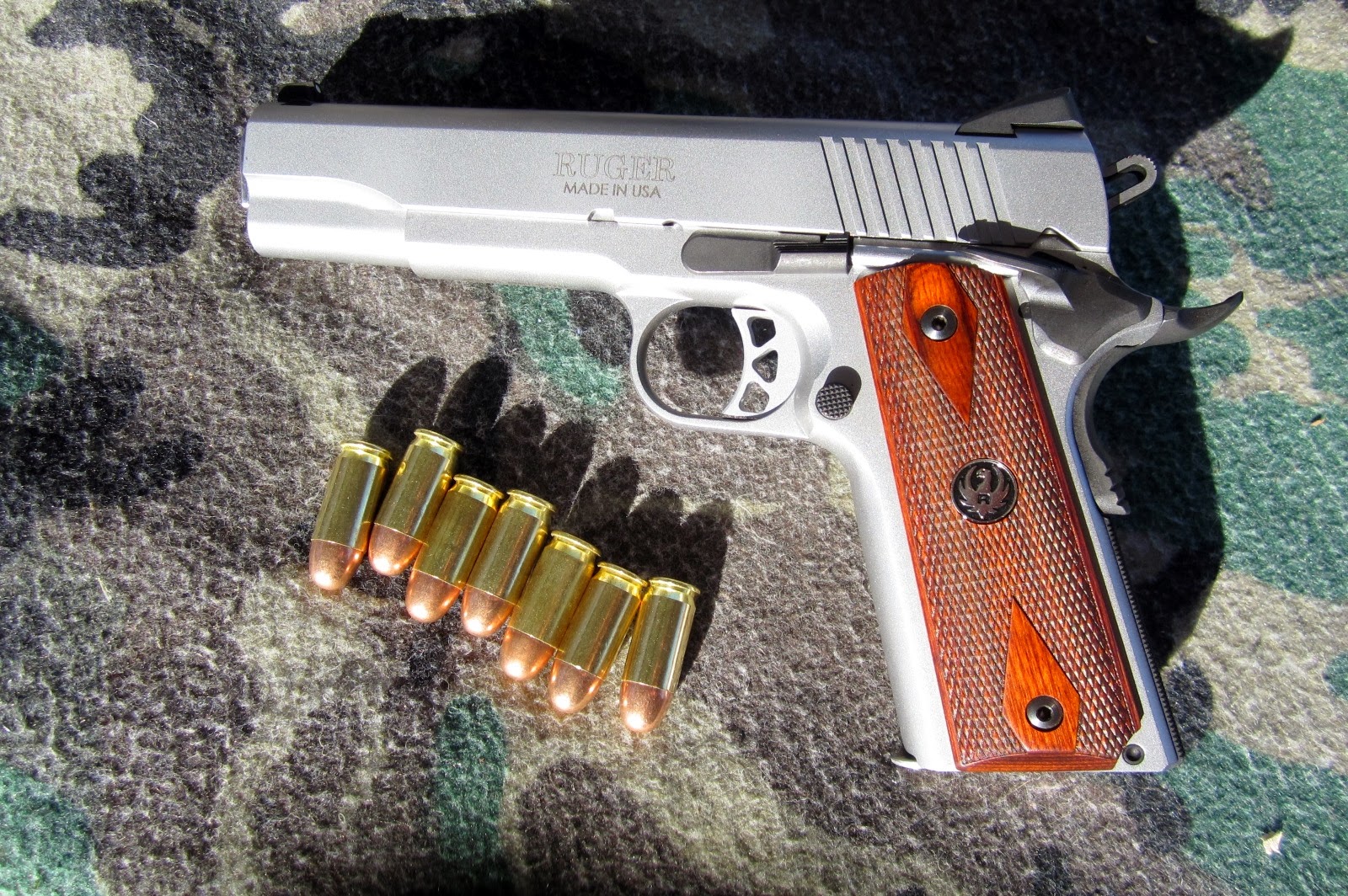 In the year 2011 Ruger introduced their very own version of the classic centerfire pistol.   Back then I knew it would be nearly impossible to get my hands on one so I just bode my time and recently my friend at the local gun shop tracked one down for me.  For a while demand outstripped supply and pistols were selling for a couple hundred over the suggested retail price.

The pistol is constructed from stainless steel with the slide and barrel machined from forged steel while the frame is investment cast stainless in Ruger's foundry.  The design closely follows the original colt "Series 70" guns in that it does not have any firing pin safety disconnect like later "Series 80" and most contemporary pistols and revolvers.  The reason for a firing pin disconnect is to prevent the pistol from firing in the event it is dropped and impacts a hard surface.  The SR 1911 uses a lightweight titanium firing pin with a heavier spring to guard against accidental discharge from impact.

I like that Ruger chose to build their pistol remaining true to the original configuration of Browning's design. 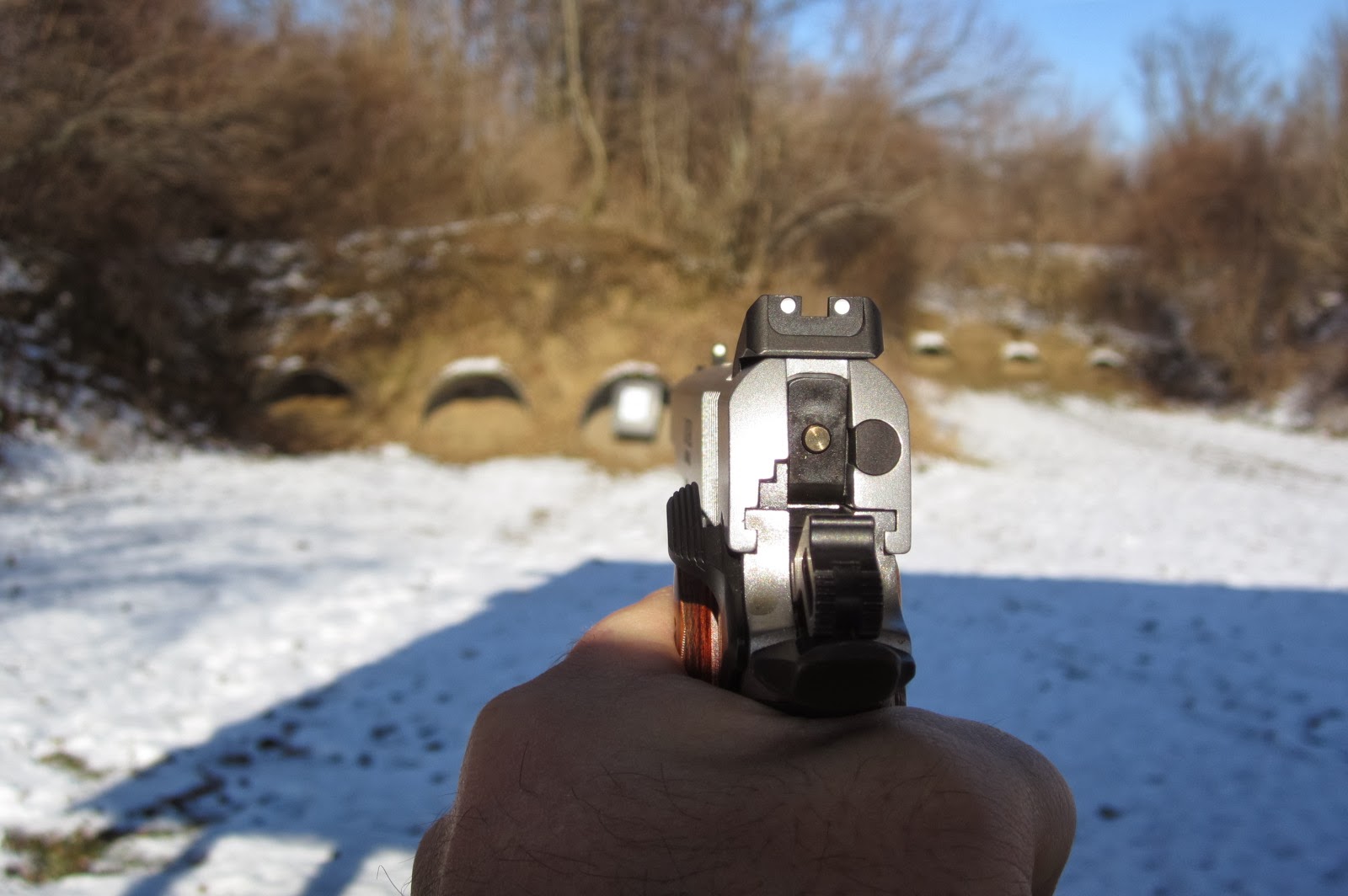 Modern features like a lightweight aluminum trigger, skeletonized hammer and Novak 3-dot sights bring the platform up to current spec's demanded by today's 1911 shooter.  I've been shooting guns since I was a boy and as an adult I've mostly been a revolver enthusiast but I have to admit there is just something very satisfying about operating a semi-automatic.

For the initial test firing I brought a box of Aguila 230 grain full metal jacket cartridges. This is the standard ammunition consisting of a copper jacketed round nose bullet seated over the powder in a brass case as used by the armed forces for the seven decade tenure of the pistols service.  I thought that would be as good a place to start as any.

I shot a combination of standing two handed fire and shooting from sandbags.  Right away I noticed that the SR 1911 with its 5" barrel and longer recoil spring shot much smoother than my 3 1/2" Rock Island Arsenal 1911A1.    The RIA was my first 1911 and it is a handful when it goes off.  I was very curious to try out the Ruger in its full size configuration.  The recoil is bit softer and the gun just feels better in my mind than the shorter version. 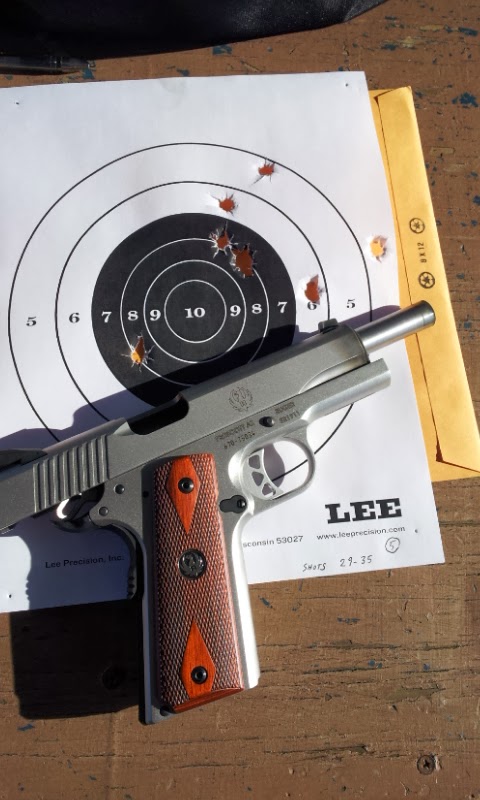 I shot on the pistol range at a distance of 15 yards.  The black bulls eye (7, 8, 9, and 10 rings on the target) measures 4 inches in diameter.  At this distance that black dot would be completely obscured by the front sight blade and after the first few shots I noticed that I was hitting high.  Adjusting my point of aim to make the top of the sight blade even with the row of numbers brought my shots down just about right.  The following targets show my hits impacting a little to the right so on my next trip out I'll remember a hex wrench so I can adjust the rear sight a bit to bring me dead on target.

Judging by the targets I look to be shooting as well off hand as I did from the steady rest of the sandbags.  I'm very happy with my results and I can't wait to get back out and fine tune sights and try out some different loads.

After a range session cleaning and proper lubrication of firearms is a must for continued safety and long service life of a weapon.  What I really like about the 1911 is how quick and easy it can be field stripped for cleaning. 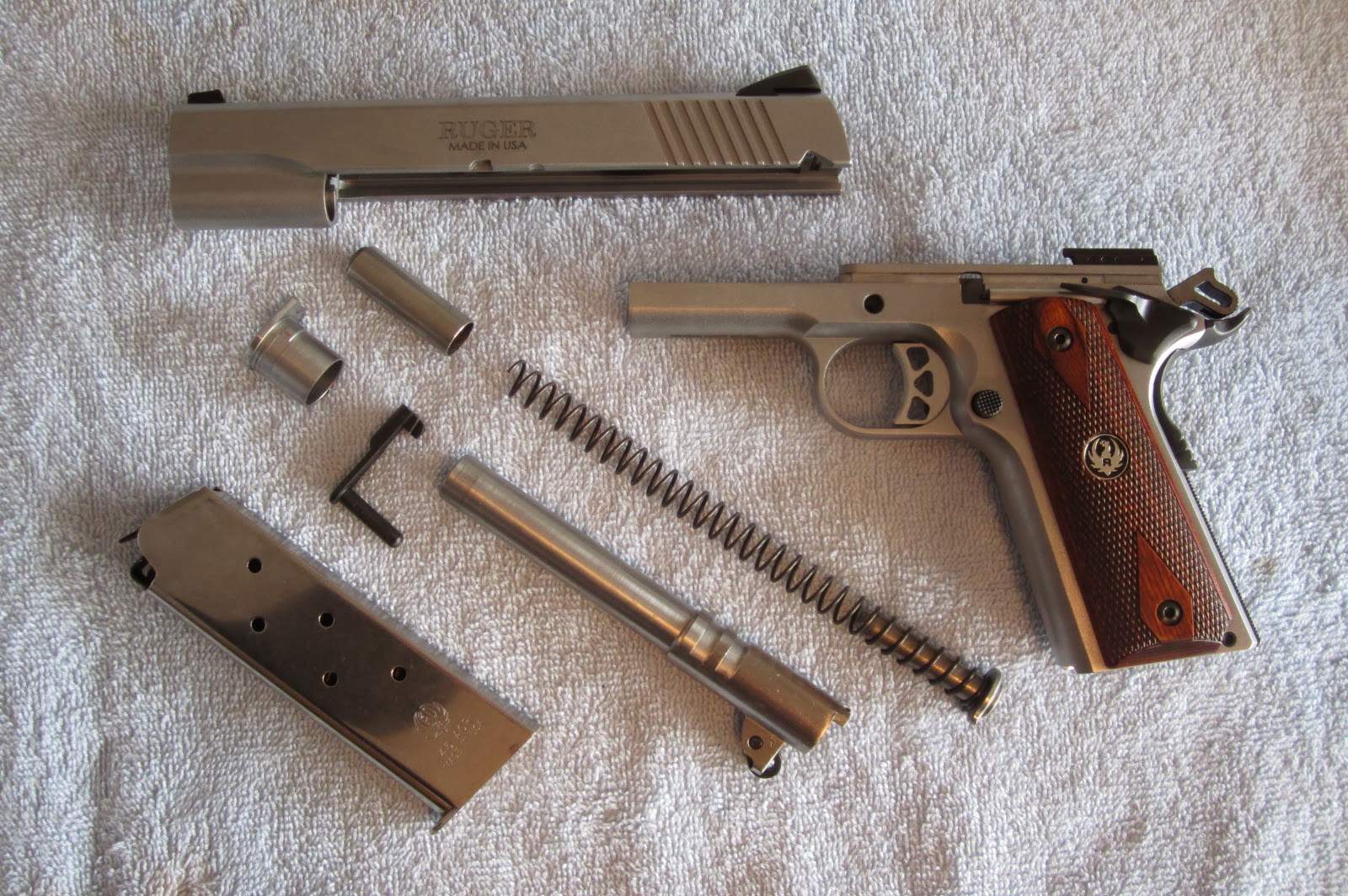 Stainless steel makes cleanup so much easier than blued or blackened guns.  Without a doubt all the grime can be removed from the nooks and crannies and you can tell by sight things are ship shape. 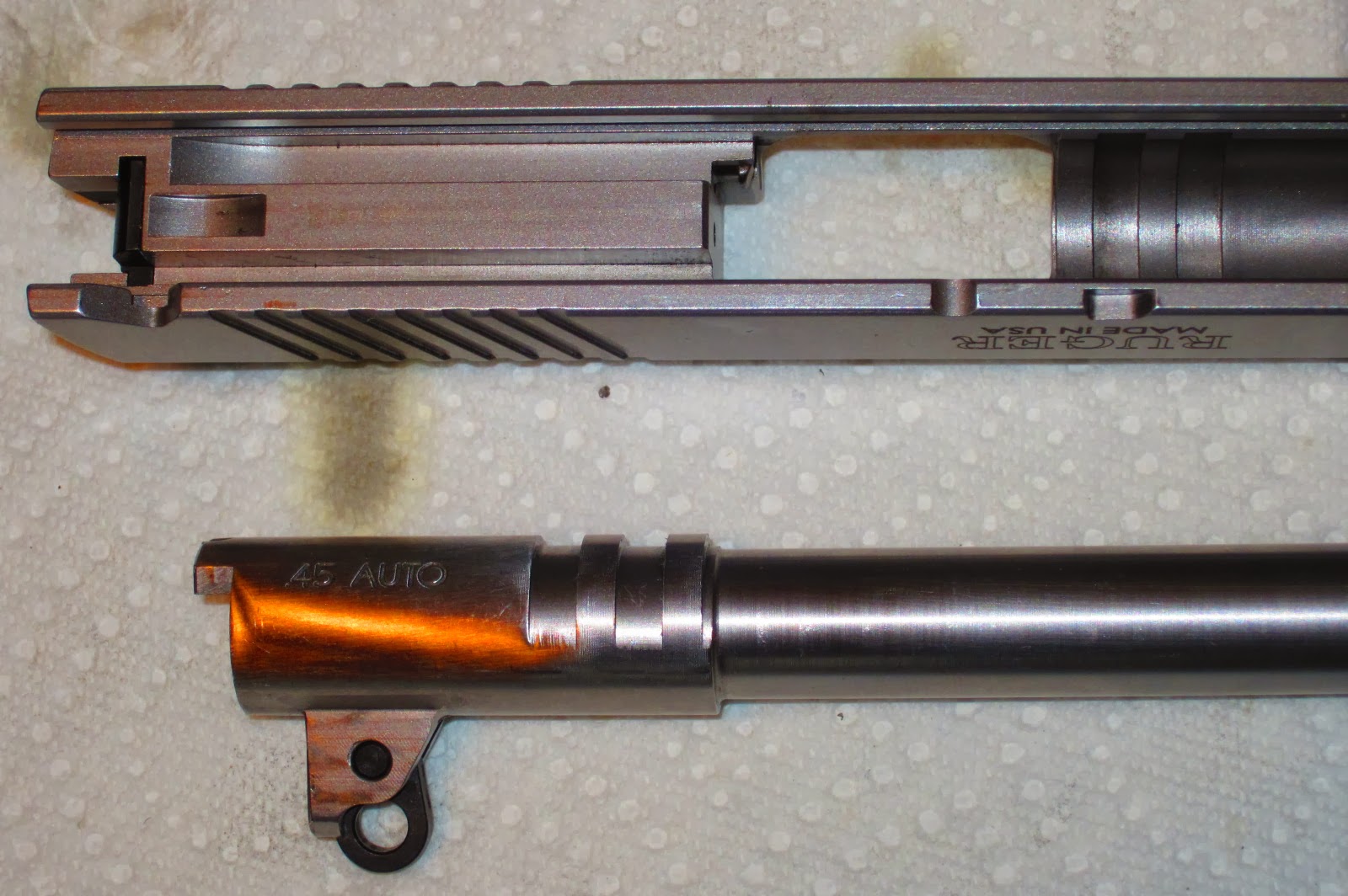 Check out this interesting article on the history of the 1911 on the Browning website.