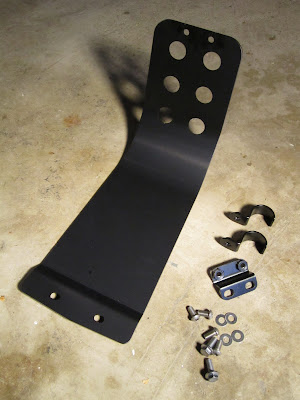 As I documented in my last post I like to ride the Scrambler off the beaten path.  Because of this I felt that adding a skid plate to my bike would be a good move to protect the leading edge of the crankcase and lower frame rails from road debris and stones picked up by the block tread of the front tire.  A secondary benefit is gaining a few more style points.  The skid plate just belongs on a bike of this type.
﻿
﻿

The plate does have six vent holes in front to allow cooling air flow so some crud will find it's way through.  Still better than no protection I found after the first hundred miles of mixed surface riding.
Mounting the Triumph accessory was a simple affair well within my limited wrenching abilities.  A mounting bracket bolts to the front frame brace onto which the skid plate attaches with four machine screws.  Before I started I reviewed the well written and illustrated installation instructions provided in pdf form by Triumph and kept the laptop on the workbench in case I needed to refer back to the guide.

A small challenge was centering the mounting bracket between the frame rails.  The bolt holes on the bracket are slots allowing for a bit of lateral adjustment.  The screw holes on the plate itself are round holes and do not allow any play.  Once the skid plate is mounted the bolts on the bracket are inaccessible.  If the plate is not centered the upper screws have to be removed and the lower screws backed out enough to allow the top edge of the plate to drop down clearing the two bracket bolts for wrench access. After about five tries I had the skid plate perfectly aligned with the two frame rails.  (I've long suspected I have a mild case of OCD) 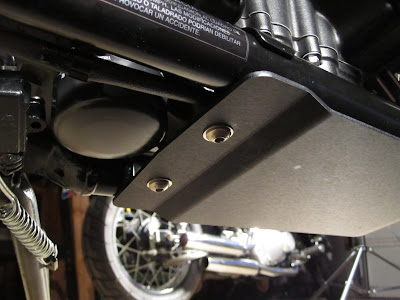 The same four screws can be later removed dropping the plate allowing access to the oil filter (black cylindrical object just aft of the plate). Some guy on the Internet did a "mod" on his plate by grinding away the material in the shape of a crescent allowing the oil filter canister to drop free without removing the skid plate. To me it's not a big deal to pull four screws. Besides I will occasionally want to clean and inspect the underside of the engine and frame rails so I see no reason to modify the part.
Posted by recumbent conspiracy theorist at 7:28 AM