Picture of the Day -- Bulldog Mack 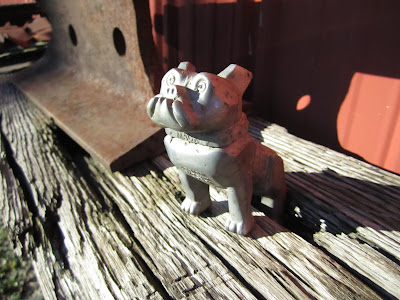 A camera lens is both the brush and the canvas.

I spotted this little piece of Americana by chance one day last month.  An Icon from the trucking industry "Bulldog Mack" was a nickname given to early Mack cargo trucks supplied to the British during World War 1.  Dutifully hauling troops and supplies to the front lines the British soldiers were impressed with the truck's reliability and brute toughness. Even the look of the truck was a characteristic that reminded them of their own national mascot the English Bulldog.  Later in the 1920's the bulldog became the official corporate logo of Mack Trucks.


I found the little guy laying on his side forlorn looking and forgotten.  His back legs had broken off from the base were he had once stood watch atop the grill of some big rig.  I set him back up straight and proud, smiled and turned to walk away before I remembered my camera in my pocket.  Serendipity often causes opportunity for the photographer and I've learned to always watch for interesting points of view.


I like how the elements of the background -weathered wood, iron and red barn siding all come together punctuating the diminutive yet tough looking form of Bulldog Mack.  The November sun was low in the sky providing great contrast to bring out the features of the pugnacious canine face.
Posted by recumbent conspiracy theorist at 5:11 PM