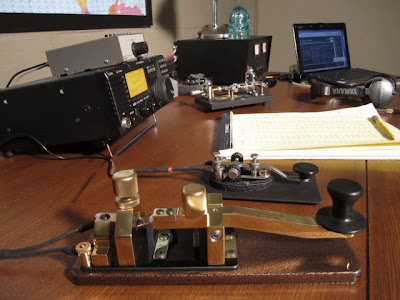 Freezing temperatures have finally driven me indoors.  Well, at least until there is enough snow on the ground to get out the skis.  Although I enjoy amateur radio all year round the winter time is the ideal season for the radio hobby.  The days in the northern hemisphere are shorter which provides a greater window for nighttime propagation on the lower HF bands.  Another benefit of winter is the absence of electrical storms.  At 7 MHz and below atmospheric lightning makes it's presence known on our receivers in the form of obnoxious static crashes.  Obviously I don't operate with thunderstorms in the immediate area but I can hear them at distances hundreds of miles away.  A static crash from a lightning discharge can completely cover even a strong signal for a few seconds at a time.  While not the end of the world it can be an annoying specifically when trying to copy weaker signals.  During the dark winter months the noise floor on the bands is extra quiet and that makes operation easier whatever the game is.
Lately I've found myself at my radio desk with renewed vigor enjoying the quiet atmospheric conditions and enhanced propagation thanks to increasing solar activity as our sun draws ever nearer to the height of the latest solar cycle.  Because greater sunspot numbers means increased solar radiation reaching Earth's atmosphere the upper HF bands (17, 15, 12, and 10 meters) have now come alive or "opened" allowing radio wave propagation.  A curious side effect of this elevated solar wind acting on the ionosphere allows a bending of radio waves back to Earth instead of being lost out into space.    This is good news in that whole swaths of radio spectrum are now available for reliable long range communications.  I've noticed that the sun's effects are not just limited to the upper end of the HF spectrum.  Signals on the bands that I frequent namely 80, 40 and 20 meters seem louder than ever.  While these lower bands don't "close" or become completely unusable during sunspot minimums they certainly benefit from a hefty shot of solar activity like we are experiencing now.
Recently I spent some time on 10 meters (28 MHz) doing a bit of beacon hunting.  Amateur propagation beacons are usually small 5 watt transmitters fed into simple vertical antennas.  These installations broadcast a short looped transmission in CW or Morse Code that identifies the call sign and location of the beacon.  In short order I had logged these amateur beacons:
WI6J/B   Bakersfield, California
N7MA   Rose Lake, Idaho
K6FRC/B   Valley Springs, California
WA7LNW/B   Hurricane Mesa Supersonic Research and Test Facility, 8 miles west of Zion National Park, Utah
Often just listening can be fun in amateur radio!

Activity also picks up during holidays and this year is no exception.  On Thanksgiving night I powered up the station to test out my neglected Morse Code skills.  My first CW contact in nearly two months took place on 40 meters with KD5ZLB who was operating portable from a cabin at Lake Hugo State Park in southern Oklahoma.

Next in the log was N2ESE, My friend Gary from New Jersey.  Gary and I have enjoyed numerous conversations using Morse Code over the airwaves since I became licensed in 2008.  Forging these long-distance friendships via ham radio is in my opinion one of the greatest aspects of the hobby.

I really could not tell any difference in my ability to send or receive the code after a month or more of non-use.  I've heard it said that the code is much like riding a bike.  One might become rusty after many years away but the ability is never totally lost. 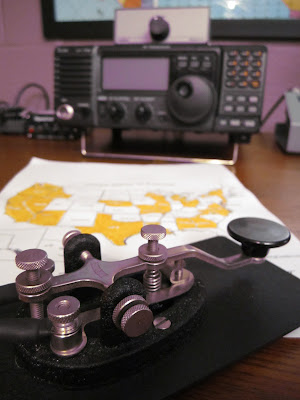 I missed the October and November editions of the Straight Key Century Club's monthly operating event so I made it a point to be ready this past Saturday for the sprint Kickoff.  I was in and out of the shack during the weekend working on other projects but did manage to make 44 contacts in 23 different states.  Two of the contacts were French club members from across the Atlantic.  F6HKA and a new member I worked for the first time:  F5JWH.

My son has been learning geography in Social Studies class so I borrowed one of his blank outline maps of the United States to color in the various states as I established contact during the sprint.  The map shows nearly universal coverage of my station to most of the continental U.S. but of particular interest is that I worked all three west coast states and Idaho, Nevada and Arizona.  My first couple of years as a radio amateur during the sunspot minimum I rarely heard these states let alone work all of them in the span of a few hours. 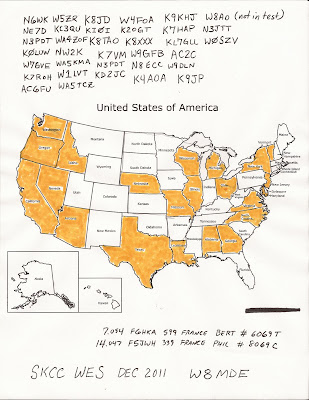 Nothing like a little casual contesting to verify the effectiveness of the wireless station.

Last but not least is an interesting bit of ham radio trivia I just learned.  For the first time in history of the United States the ranks of amateur radio license holders has exceeded 700,000.  In almost four years I have contacted around 1,000 of them mostly using Morse Code.
That's a lot of beeps.