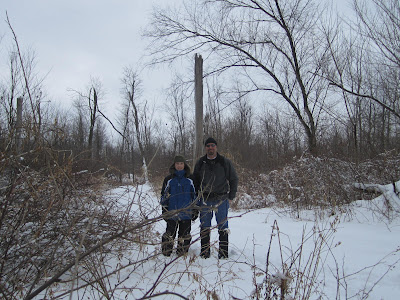 Friday's winter storm dumped an additional eight inches of snow on the area.  It's been quite a winter here in Ohio.  More snow than we have seen in many years.  It will be interesting to know the total snow fall for the season once all is said and done.

In order to get out of the house for a while on Saturday Wyatt and I decided to go for a winter hike at Clear Fork.  In the 24 hours since the storm all the county roads had been plowed but none of the parking areas or pull-offs had been cleared.  My trusty Honda CRV has all wheel drive which works great but the vehicle's tires have ordinary street tread so I am very cautious in snow depths of 6" to 12".  The only place I felt confident enough pulling the CRV off the road and into the snow was a flat access to some hunting area along the North-West end of the reservoir.  Adding to our sense of adventure was the fact that I had not yet explored this particular area of the park. 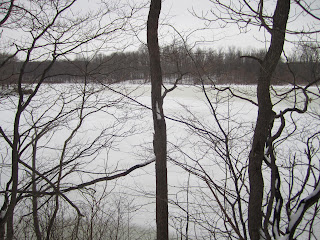 During our trek we enjoyed looking at various tracks in the fresh snow.  We easily identified rabbit, squirrel, raccoon and white tail deer that had moved through the area leaving their sign behind.  I enjoyed teaching my son how to determine the direction of travel of deer.  In deep snow it is not always possible to see the imprint of the hoof to determine which way the animal was going as would be readily apparent in soft soil or mud.  After a heavy snow fall a deer's hoof tips will leave scrape marks on the surface of the snow an inch or so deep during it's stride that can be used by the tracker to tell which way the animal was going. 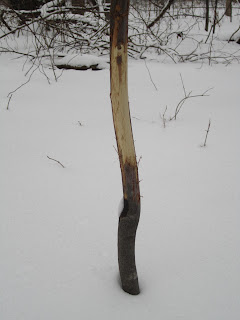 Here is a classic white tail sign called a "rub".  In the fall a buck will rub his antlers on a tree trunk aggressively enough to remove the bark from the tree.  Deer are creatures of habit and these rubs can also be used to determine the route of a cruising buck.  Leading up to the "rut" or mating season the North American Whitetail will patrol his territory in a repetitive circuit rubbing trees in the direction of his path.  This behavior leaves a visual marker readily apparent by sight.  More importantly though the buck has scent glands on his forehead near the antler that deposit his scent onto the rub as a notice to any female deer that happen into the area. 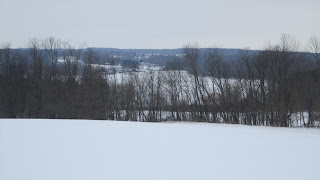 This shot from the North-East I have wanted to take for a couple of years now.  The reservoir in the background is only visible during the winter when the trees are bare of their foliage.  The area we hiked is just out of the frame to the right.
﻿
Posted by recumbent conspiracy theorist at 3:19 PM