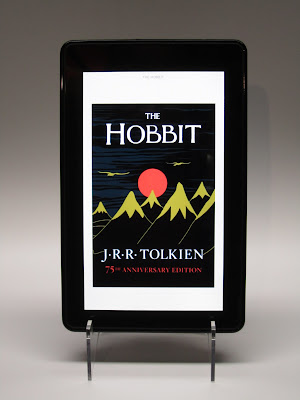 Over the weekend my family and I went to the theatre and saw the new Peter Jackson film The Hobbit: An Unexpected Journey.  I have still not seen all of the Lord of the Rings Trilogy films from a few years ago but I am a fan of Jackson's rendition of the epic Tolkien tale of good versus evil.  We all agreed the big screen would be the best way to watch the original story of how Bilbo the hobbit first found the magic ring and we were not let down.  It was a fun family night out and we thoroughly enjoyed it.
It has long been my opinion that movies made from books are never as good as the books themselves and this is no exception. I will say however that Peter Jackson has done an excellent job capturing the spirit of the story and adapting it to film. I first became a Tolkien fan 29 years ago while in the eighth grade when a classmate lent me a ragged paper back copy of The Hobbit.  I can still remember being instantly drawn into the story and reading well past my bed time on school nights simply unable to put the book down.  Over summer break before my freshman year of high school I devoured the Lord of the Rings Trilogy. Then as now I am blown away by the breadth and scope of the this story and what a masterful storyteller JRR Tolkien was.
My favorite part of the movie was the scene in the bowels of the mountain where Bilbo first encounters Smeagol and finds the magic ring.  I like to describe a good book as a movie that plays out in my mind where I lose track of time and forget that I am even reading words from a page.  Incredibly this part of the movie is exactly as I have pictured it in my mind's eye all these years. Andy Serkis who plays the loathsome Smeagol/Gollem character does a great job, I think the best performance in the film.
I read the whole series a second time during my Air Force years by checking the books out from the library or borrowing from friends.  After seeing the film I downloaded the 75th Anniversary Edition to my Kindle Fire and once I'm through with The Hobbit I'll get the Trilogy and continue on enjoying  the story once again as it has been quite a few years.  I'm into the first chapters now and the Kindle E-book format works great making the story really leap from the page or screen I should say.
There is one last interesting thing I learned from reading a section called "Note On The Text" in the Kindle version about the book that was originally published in 1937.  In the second edition printed in 1951 Tolkien made revisions to parts of Chapter V "Riddles in the Dark" to bring the story more in line with The Lord of the Rings that he was working on at the time.  For the fourth edition in 1995 technology made it possible that the work could be entered into word-processing files and line by line comparisons with earlier versions allowed additional corrections to be made presenting a text most closely resembling Tolkien's intended form.
My recommendation is go see the movie even if you are an old fan like me or better yet pick up a copy of the book if you've never read it. It's money well spent.
﻿
Posted by recumbent conspiracy theorist at 3:29 PM