Field Day 2012 is about 4 weeks away.  In preparation I've been shaking down the assembly procedure of my high frequency transmit and receive antenna.  Deploying in the back yard gives me a chance to fine tune the small details of my system.  Stuff like using the antenna analyzer to observe how different lengths of feed line and radials affect the antenna's performance.  Another thing I like to do is plug in the vertical's feed line to my antenna switch and then I can flip the switch back and fourth between the home brew vertical and my 40 meter end fed half wave for side by side comparisons.

I followed plans from the 2008 ARRL radio handbook to construct the single band short hf vertical antenna.  See this Post for close up pictures of the radiator.

With 75' of coax to my rig in the basement ham shack I answered a CQ call from AA8V in Frostburg, Maryland.  Greg was using a home brew one-tube amp built on a baking sheet, he told me through Morse code!  As I signed off with Greg another station who had a very loud signal called me.  I answered K3JWI and learned that the origin of the nice signal was Ken in Ooltewah, Tennessee.  Maybe propagation was just right and my signal was loud and clear at Ken's location 400 miles to the South and that's why he called tail-ending the previous contact.  I received 599 signal reports from both stations.

I'm still amazed that an antenna that I built can transmit radio waves and support communication with amateur short wave stations in other states hundreds of miles away. 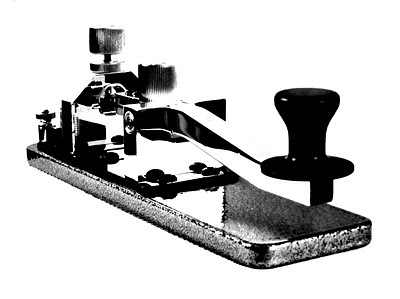 I've been so busy this spring I missed a couple monthly Straight Key Century Club Week End Sprints but this month the stars aligned and I found some time to participate.  I ran my rig's power at 50% and had a great time making CW contacts all over the U.S. using my Vibroplex Original bug and SKCC Club key. (pictured above)