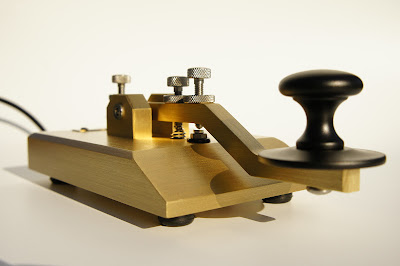 Back in February of this year I learned that Tony, N3ZN would be introducing a straight key and this key would be slated for release in the late summer or fall of 2012.  I contacted Tony right away securing my name near the top of the list and after the long summer I am now the proud owner of ZN-HK serial number 002.

Tony is a master craftsman of Morse Code instruments and is best known for his magnetic paddles.  While my proficiency with sending and receiving the code has steadily increased allowing me to more effectively make use of paddles for sending higher speed Morse I will always be a straight key operator at heart.

A straight key breaks down the act of sending to its very basic original form.  Elements of rhythm, precision and accuracy are required by the operator of a hand key to produce code that is pleasant to the ear and easy to copy.  A straight key is played much like a musical instrument and as such the skill of the operator makes all the difference. 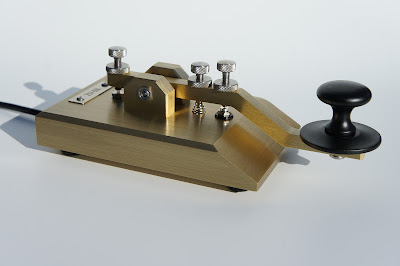 The design of the ZN-HK follows the traditional American style with a bent arm. Topping the lever at the point of human interface is a large navy style knob and skirt.  This arrangement has become my favorite so much so that I can hardly stand to send with a flat-knob key.  I place my index finger on the top of the knob and my thumb and remaining fingers rest lower down on the skirt.

In the old days telegraphers would refer to this lower skirt as the "poker chip".  In all likelihood a re-purposed poker chip was first used under the knob of a telegraph key to provide a safety barrier against the metal of the arm.  In the early days of radio the key was part of the transmitter circuit and huge voltages would be present on the key itself.  This made it very important that one not touch the metal while the gear was energized.  Modern amateur radio key circuits operate with just a few millivolts so electrocution is no longer a hazard. 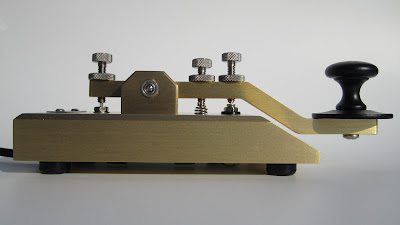 The major components of the key and base are machined from solid brass.  The lever and trunnion ride on precision bearings and adjustments can be made with the assorted stainless steel hardware.  Every bit a work of art as it is a precision instrument the handsome brushed surface of the key is sealed with six coats of a specially formulated lacquer made for brass.  The ZN-HK should always have its like new luster.

A feature I like is the big bevel cut along the front edge of the base.  Not only from an aesthetic point of view but the engineering side as well.  The angled cut matches the bend in the lever and allows the pivot point to rest far back on the base preventing the key from tipping forward if the user gets a little heavy handed.  Tipping is one of my biggest peeves with American style keys.  Thanks to Tony's expert engineering and the heavy brass base this thing stays rock steady on the desk and absolutely will not tip.
﻿ 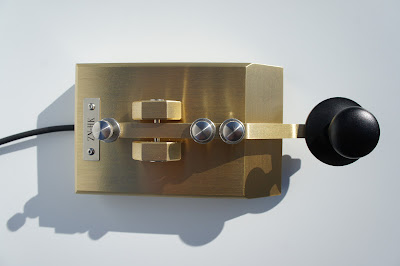 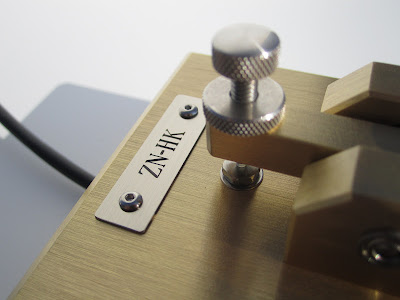 In keeping with the high quality theme a perfectly proportioned and engraved nameplate is fixed to the rear of the base with tiny machine screws.
Like a kid on Christmas morning when I opened the package I had to run down to the ham shack and plug it in.  After setting the gap and lever tension to my liking I was shortly in QSO with KA2YBT in Nassau, NY on the 40 meter band.  I would have played around more on the air but I had to attend my local radio club meeting.  Later I met up with ND9M in Panama City, Florida also on 40 meters. The third contact made with the new key was an interesting one.  After calling CQ on the 80 meter band I heard a faint signal answering who was amateur station AC0AF located in Duluth, MN.  The Ops name was Dave and he was transmitting QRP or low power. His transmit power was 1 watt!  We exchanged information and had a short but pleasant conversation. The QRP guys always amaze me.  Dave's one watt wireless signal at 3.538 MHz travelled 625.7 miles to reach my antenna.
I've been busy with other things so I've not had a lot of time for brass pounding but this winter I will be putting the ZN-HK through its paces for sure.  The key is solid and the feel and response is very precise.  Making the Morse music with this fine instrument is truly a joy.
Thanks Tony - Job well done!
﻿
Posted by recumbent conspiracy theorist at 9:51 AM