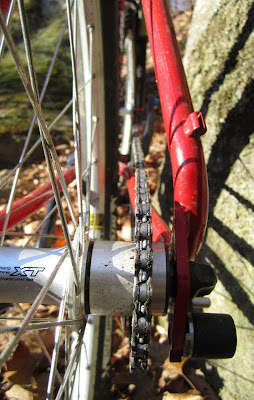 Last week I took my car into the shop for routine maintenance and I was talking to my mechanic Steve who also happens to be a long time riding buddy of mine.  By day Steve works on cars but for the rest of the time he lives and breaths mountain bikes.  He mentioned that on Saturday he was planning a drive to southeastern Ohio to ride mountain bikes at Lake Hope State Park in Vinton County.  I was planning on a recumbent ride but the idea never occurred to me go out for some trail riding and I agreed to join him on the spot.  Steve and I have been riding together since the early 90's and have enjoyed many miles of Ohio single track together.  Of our old group we are the last two that still get together when we can for a little fun. 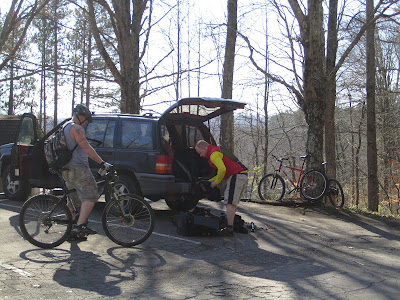 On the left is Lance a new rider joining us for his first time out on a mountain bike.  Steve is a big cycling advocate and he enjoys introducing new people to the sport.  Even setting them up with one of his bikes to ride if they don't have wheels of their own. 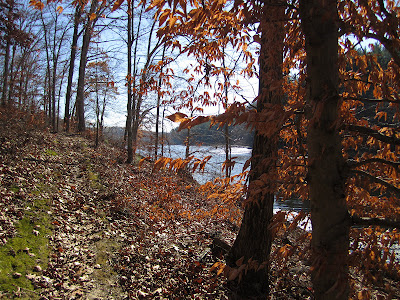 It's a couple hour drive to the park but it is well worth the trip.  Saturday the weather was great and the temperature warmed up to just over 60 degrees.  The views from the trail around the Lake are just magical.  I've mentioned before that spring and fall are my favorite times for mountain biking. When the leaves are down it is much easier to see the lay of the land. 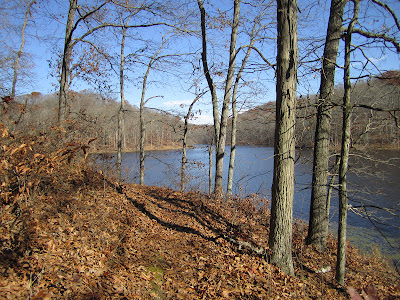 The park is situated in a region that once supported a flourishing iron ore smelting industry in the 1800's.  Near the main road the remnants of Hope Furnace can still be seen.  During the height of its production the furnace was fired 24 hours a day and the huge demand for wood soon stripped all the surrounding hills of native timber.  Iron from the Hope Furnace was used to make cannons and other munitions for the Union Army during the American Civil War.  All the forest presently in the park is second growth predominately Oak and Hickory. 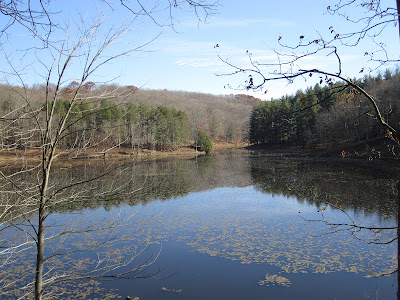 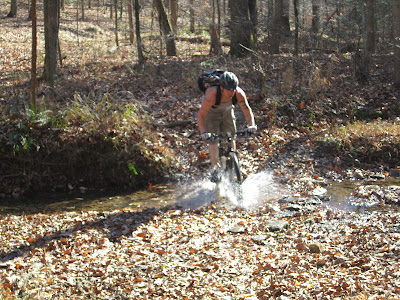 Here I got a nice shot of Lance fording a small stream.  Steve and I were impressed with Lance. He did a great job for the first time on a bike since his bmx days as a kid.  To his credit Lance has extensive experience with dirt bikes and four wheel ATV's so he already knows a great deal about getting around off road.  Lance also enjoys playing football and MMA fighting so he was pretty fit to start with.
That said Steve and I always get a kick out of taking young guys in their twenties for trail rides.  Endurance cycling is unique in that it takes years of riding to build up the endurance for hours in the saddle.  For the first hour or two the young guy can go strong but soon enough they're sucking wind.  We take it easy on them letting them have plenty of breaks and not getting two far ahead but it is certainly fun for a couple old dudes in our 40's and 50's to run circles around the young pups!
Steve is a great guide. Along with his intimate knowledge of the trails he also is constantly emphasizing the need to stay hydrated and keep a steady stream of food going in on these long rides to avoid the bonk. 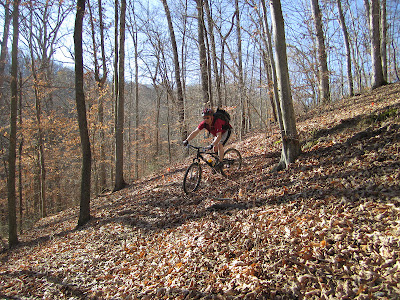 Above Steve navigates a leaf covered switchback.  While it is beautiful in the woods in the fall the blanket of leaves on ground makes it tough to see the trail.  Often the only clue is a slight depression.  On trails hugging the side of a hill the flatness of the trail is more apparent than on level ground but it is still tough.  These pictures I took on a connector trail that had seen little use.  The main trail that travels the northern perimeter of the park was more beat in from previous riders so navigation was much easier. 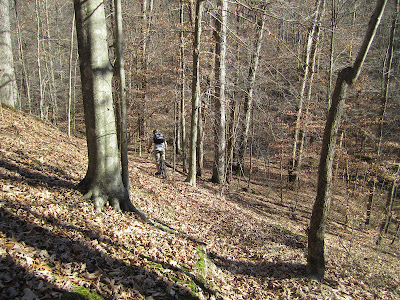 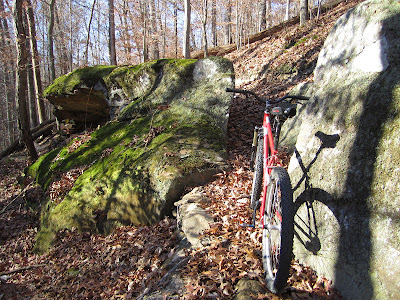 Lake Hope may very well be my favorite trail system here in Ohio. Its been a place I've wanted to write about for a while but it has been about four years since I last rode in the area and that was back before I started my blog.
For the most part the trails of the park are smooth and flowing with not too much in the way of roots and rocks so even with the leaf cover the ride is still very nice.  The Athens Bicycle Club responsible for designing and building many of the mountain bike trails did an expert job. Not cutting in the grades too steep make the network a single-speed paradise. Keeping the pace down to a reasonable clip for Lance we covered 18 miles in about 4 1/2  hours.  About five minutes into the ride the tension spring broke on my left eggbeater but thanks to Steve's mechanical prowess and multi-tool he saved the day by unwinding a key ring and bending the steel around the cleat retainers enough to provide the needed tension allowing my shoe to lock in so I could keep riding.  It wasn't until the last mile or two that the key chain stretched enough to not keep me locked in.  Other than that small mechanical we had no serious mishaps and spent a wonderful day on the trail. Lance loved the experience and wasn't hating us so we think we may have pulled a new enthusiast into the fold.
﻿
Posted by recumbent conspiracy theorist at 1:00 PM