I have had the photography for this post complete for some time but have been at a loss on how to transfer my thoughts on this subject into text.  For the past 18 years I have made a living in the nameplate business.  Industrial Screen Printing to be specific.  My company supplies nameplates, decals, and graphic overlays to the manufacturing industry.  A peculiar side effect of my vocation is that I am always examining the labeling of goods and equipment that I come in contact with.  I know I probably should not judge a piece of equipment by the quality of it's nameplate but this is just something I do.  A high quality, attractive label, while not essential to the performance of said equipment definitely says a lot to me about the manufacturer's philosophy.

During the industrial revolution of the 18th and 19th century the world transitioned from manual labor and draft animal based economies to machine based manufacturing.  As a result of this change a specialized industry was born to address the need of documenting certain information for the many manufactured goods being produced in the world's shops and factories.  The nameplate was a way for a maker to proudly display his moniker and trademark on a good that he produced.  Other pertinent data such as patent and serial numbers could be recorded permanently on a metal plate by various stamping or etching methods.  When I am at a garage sale or an antique shop looking at old appliances or tools I like to admire the nameplates on these products from yesteryear. Unlike today the goods produced in times past were built to last and by nature so was the labeling.

The Vibroplex line of Morse code keys are a great example of a mass produced item that began in the hey-day of the industrial revolution and continues on today.  The bold brass embossed nameplate with the "lightning bug" trademark is instantly recognizable by hams and telegraphy enthusiasts around the world.  In my research which really just amounts to scratching the surface of what is out there concerning this company I have learned some interesting stuff.  According to an article by John Ceccherelli, N2XE that appeared in the January 2003 issue of QST, the brass stamped nameplates were first used by Vibroplex around 1920.  A rectangular black and silver nameplate was used on the earliest semi-automatic keys by Vibroplex.  John also stated that the same shop had been producing the brass nameplates from the original run right up to the time his article was published.  A nameplate production run by one shop spanning nearly a hundred years is simply amazing I believe.

According to the "Vibroplex Collectors' Guide", Second Edition by Tom French, W1IMQ there were 22 different types of  nameplates made for the Vibroplex line from 1905 to present.  The only difference between these types, aside from the early rectangular plates, are additional patent numbers and different addresses as the company was relocated during it's history.  Three "A" series, four "B" series and three "C" series plates made up the rectangular versions between 1905 and 1920.  The nine different "D" series plates made between 1921 to just recently are the familiar embossed brass plate.

Now a completely new style plate has been introduced by Vibroplex for all of the keys previously using the brass plate.  This new design is a very attractive and well made nameplate that I presume is screen printed gold anodized aluminum.  From here I will simply speak my mind, my opinion. That is what blogs are for after all.  I don't like the new plate.  I've spoken to a couple hams who share my opinion and I know we can't be the only ones.  I know change is inevitable and progress marches on but in the case of these legendary instruments and their iconic nameplate I think the change was a poor decision.  As I said the new plate is fine and does not effect the performance of the key whatsoever.  I love my new Iambic paddles but the new plate looks too "modern" especially when sitting in it's spot beside the bug on my operating desk with its old style embossed plate.

I have no idea of the reasons behind the decision to revise the nameplate.  My industry like most are plagued with ever increasing material costs and tightening environmental standards making some processes too cost prohibitive to be profitable or even possible.  Perhaps the hard tooling used to stamp the plates has finally worn out and it would cost thousands I'm sure to retool for the job.  In any case I would like to see Vibroplex acquire some new old style plates and start a trade in program at the very least.  Owners if they so desired could remove and send back the new style plates to Vibroplex and receive an old style in trade with the same serial number stamped.  I would do this even at my expense.  I would have gladly shouldered a price increase of the key itself if that is what it would take to continue with the embossed brass plates.  I know it's a minuscule issue in the grand scheme of things but as a nameplate guy it just gets under my skin.

The following pictures show the plates on each of my four Vibroplex keys.  The plates are bare brass and I love how the embossed detail has begun to tarnish while the back ground remains brighter.  In other words these plates have loads of character and compliment the hardware they are riveted to in a way that can't be beat. 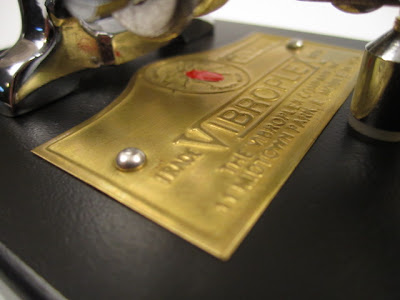 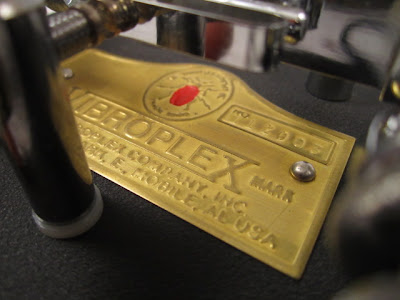 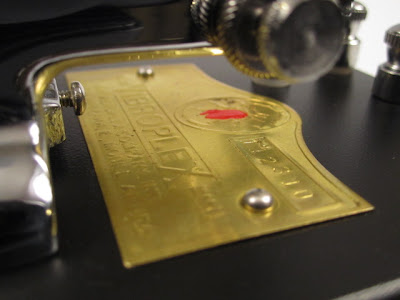 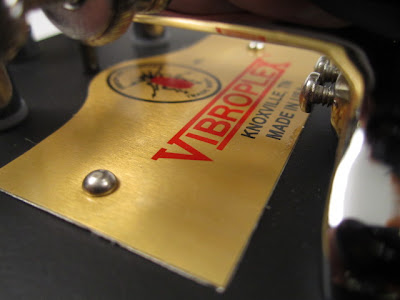 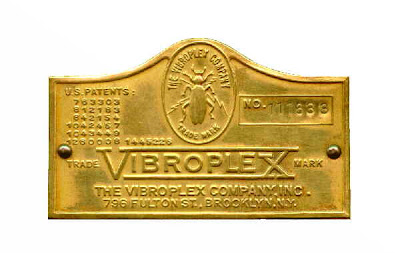 Here is a photograph of a D3 Nameplate from the  The Vibroplex Collector's Page  Maintained by Randy Cole, KN6W.  Based on the seven patent numbers, the 796 Fulton St., Brooklyn, NY address and the serial number it can be determined that the Vibroplex that wore this badge was produced in the years between 1926 and 1939. 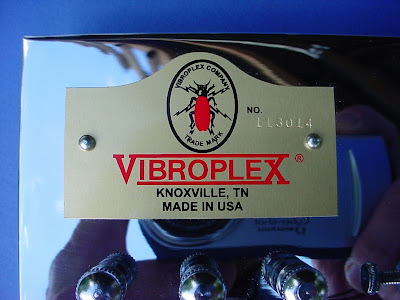