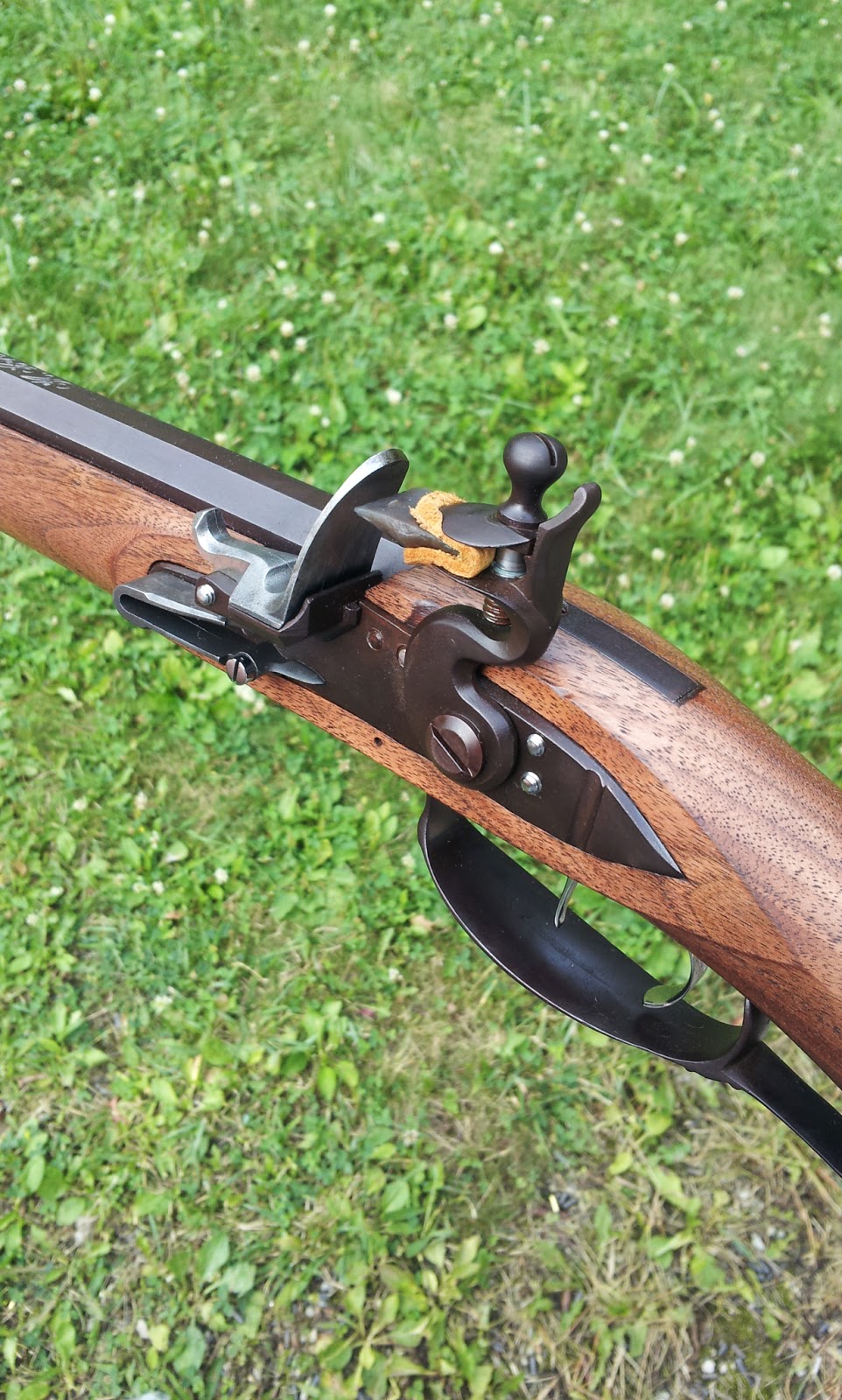 As a firearms enthusiast I've long been interested in black powder guns.  My first experiences with black powder came in the mid 1990's with the growing popularity of the inline ignition rifle used for hunting.  Striker fired weapons with the percussion cap positioned on a nipple directly behind or "inline" with the breech area of the rifle provide for a quick instantaneous ignition of the powder charge.  While well suited to big game hunting the modern muzzle loader to me just seems to miss the point.

Being a student of history it didn't take me long to look backwards and study the origins of early firearms.  My first traditional muzzle loader was an Italian made Pedersoli Rocky Mountain Hawken rifle in .54 caliber which is representative of designs dating to the mid 1800's.  That rifle I've talked about before on this blog.  The Hawken is a fine side lock that uses percussion caps as an ignition source but my curiosity eventually led me to the flint lock rifle.  The flintlock was the predecessor of the cap lock using the strike of flint against a steel frizzen to shower sparks into a pan containing a small amount of black powder.  This action ignites the main charge in the breech through a small orifice in the side of the barrel.


After attending a few living history events and watching primitive flint lock rifles and muskets in use I knew I had to get in on this action.  I read some forums and perused various catalogs and websites of rifle builders before I settled on a maker for my very first long gun commission.

Choices are pretty slim for left handed factory produced rifles so ultimately I decided on a semi-custom by Matt Avance of Tennessee Valley Muzzleloading.  TVM has a great reputation among hunters and shooters of producing reliable accurate traditional long guns.  A couple of factors led me to go this route.  First and foremost I like buying American made firearms.  Secondly by purchasing from a small builder I would be able to specify some of the rifle's features to fit my needs and tastes and lastly I knew I would be able to count on the rifle's lock work to be set up and timed for perfect ignition.

Last October I made a deposit which got me on the waiting list and I went about other activities through the winter and tried to keep my mind off the flint lock. Finally I got an email about mid summer saying that Matt was ready to begin my rifle.  After confirming the particulars it would take about four weeks until the build was complete and ready to ship.

What first got my attention about the Iron Pennsylvania was the name itself. "Iron" means all of the gun's furniture or metal parts are made of steel instead of brass which was common in colonial America.  Locks have always been made of steel and in the early days they were imported from England.  Other parts such as trigger guards, butt plates, nose caps and ramrod thimbles were fabricated from brass by colonial gunsmiths because it was easier to work with and readily available.  The brass fittings are fine and period correct but I like the more subdued look of all steel furniture on my guns.  Since I'm not a history reenactor I'm not concerned with the small details of historical correctness.  I just wanted a rifle that loosely resembles a long gun of the late 1700's. 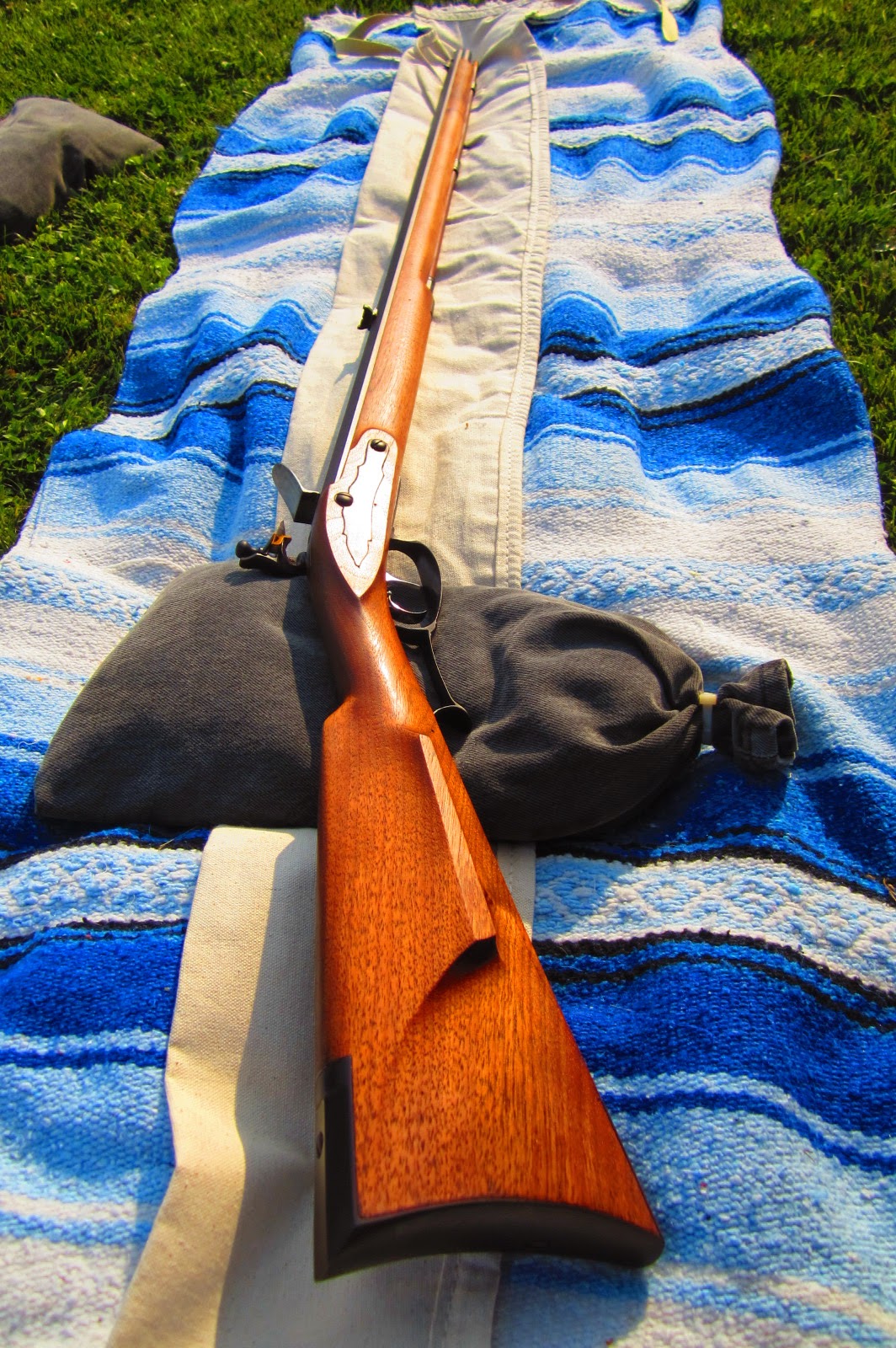 I chose American Walnut for the stock. Finished natural with only a clear oil shows off the true color and beauty of the wood.  Walnut has long been a favorite material for gun stocks and I think it just looks great so there was no question of my choice.  Traditionally maple was most often used because it was easily sourced locally.  Even in early America figured maple with tiger stripe grain patterns was highly prized and many original guns still exist proving the popularity. 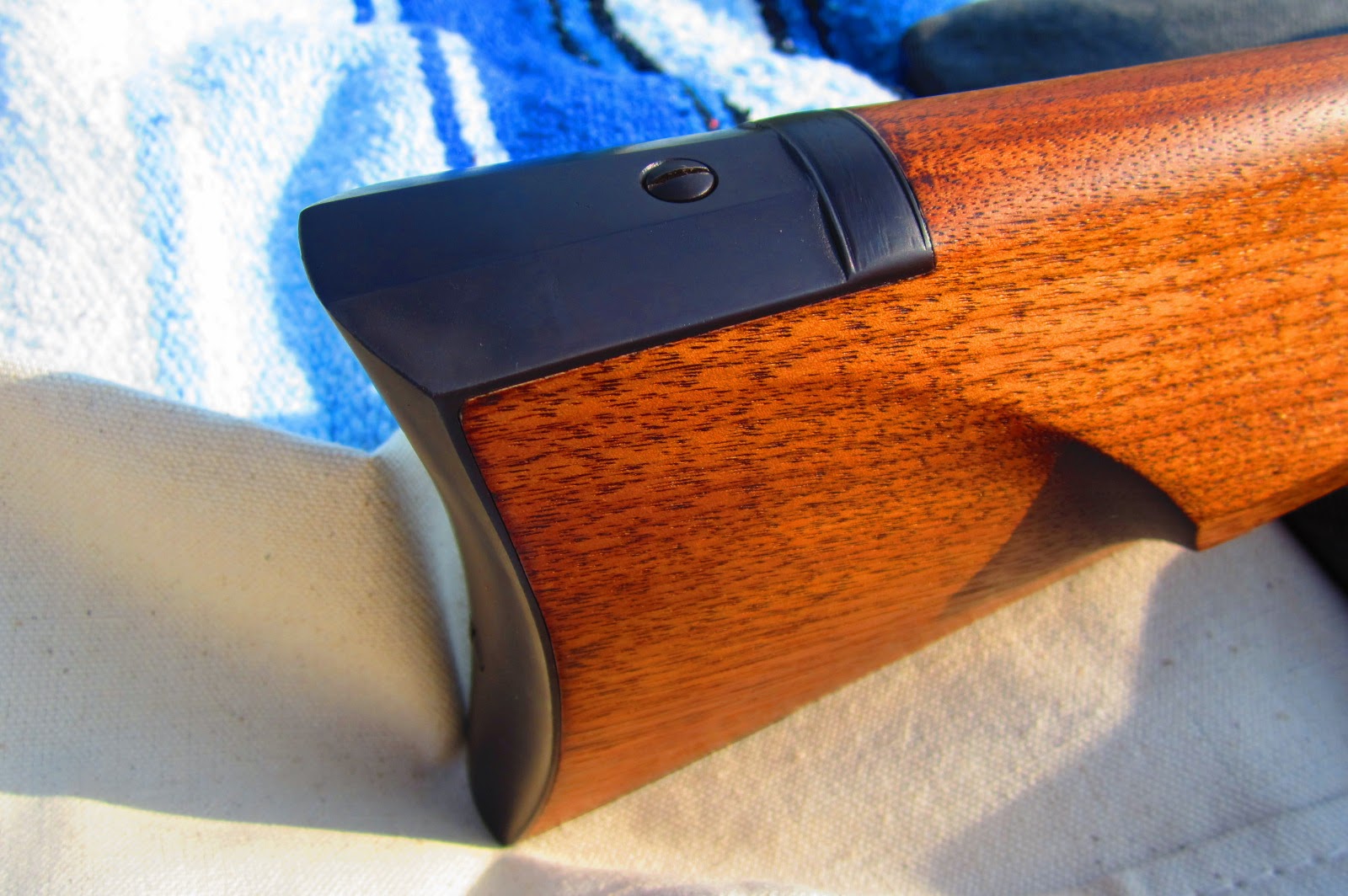 The metal of modern firearms are commonly polished and "blued" or rendered black by a chemical process.  Before bluing was the standard primitive rust-browning techniques were used to seal and finish off the surface of metal parts and barrels. This browning is the look I chose for all the furniture. 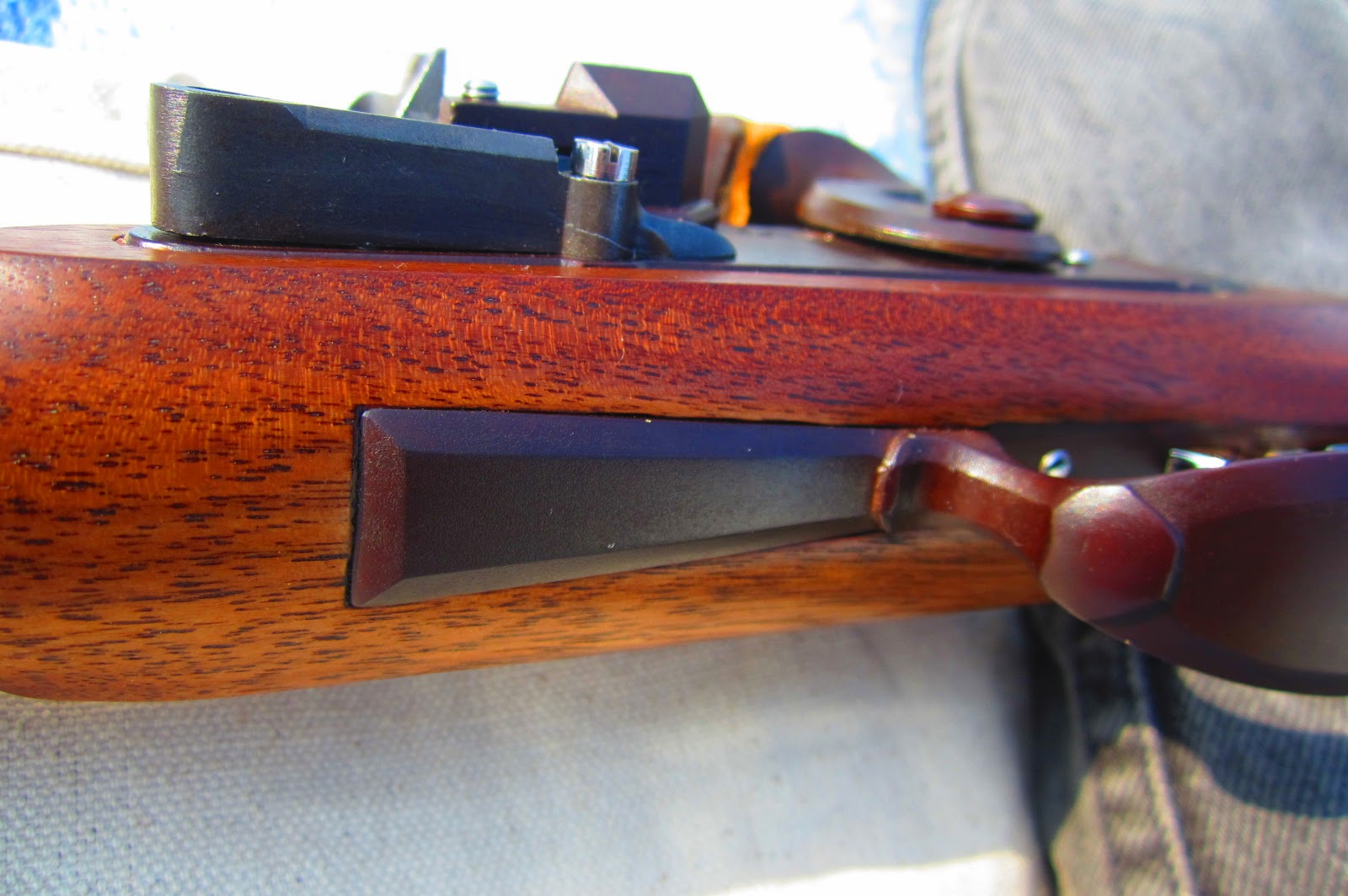 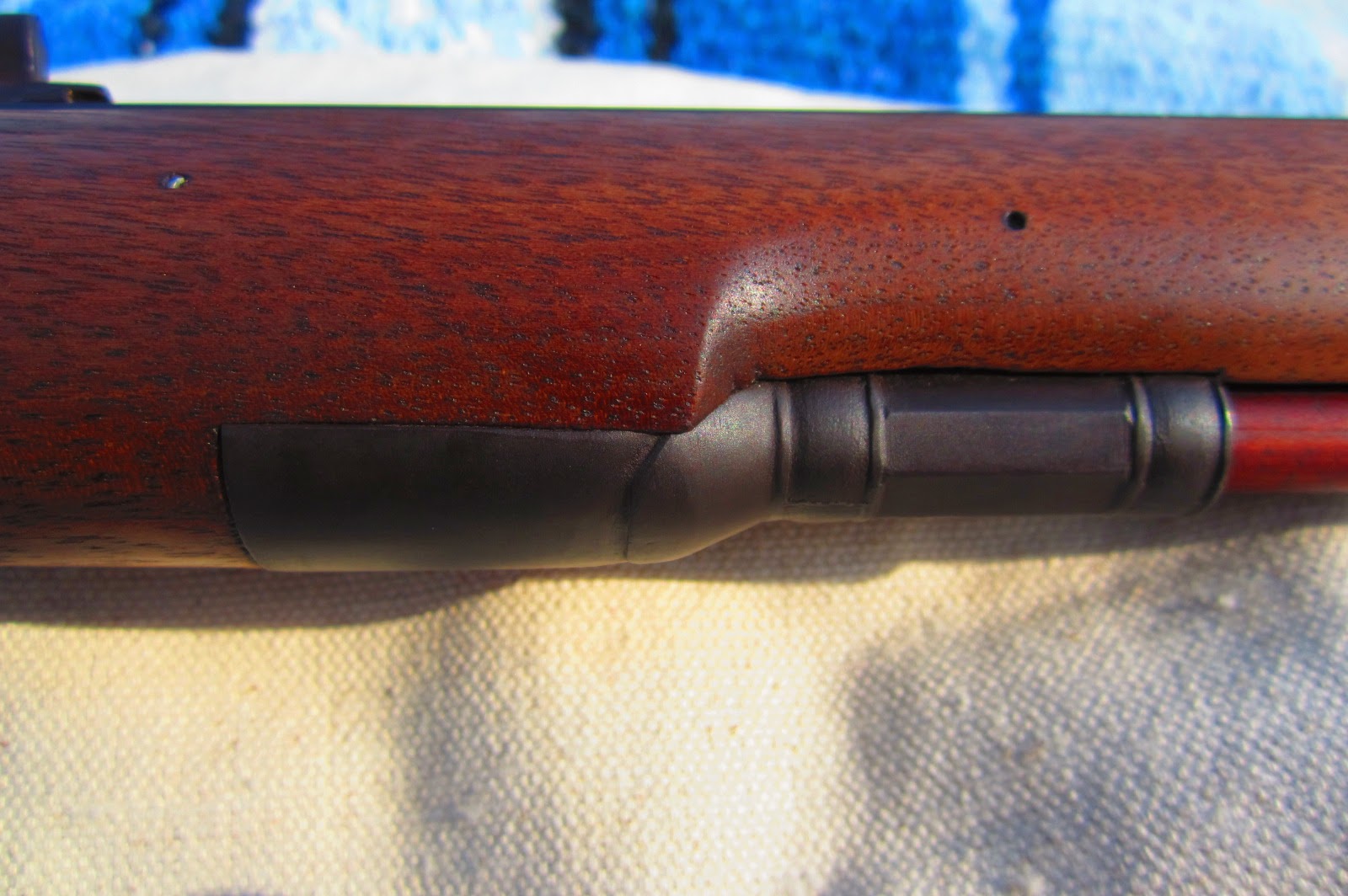 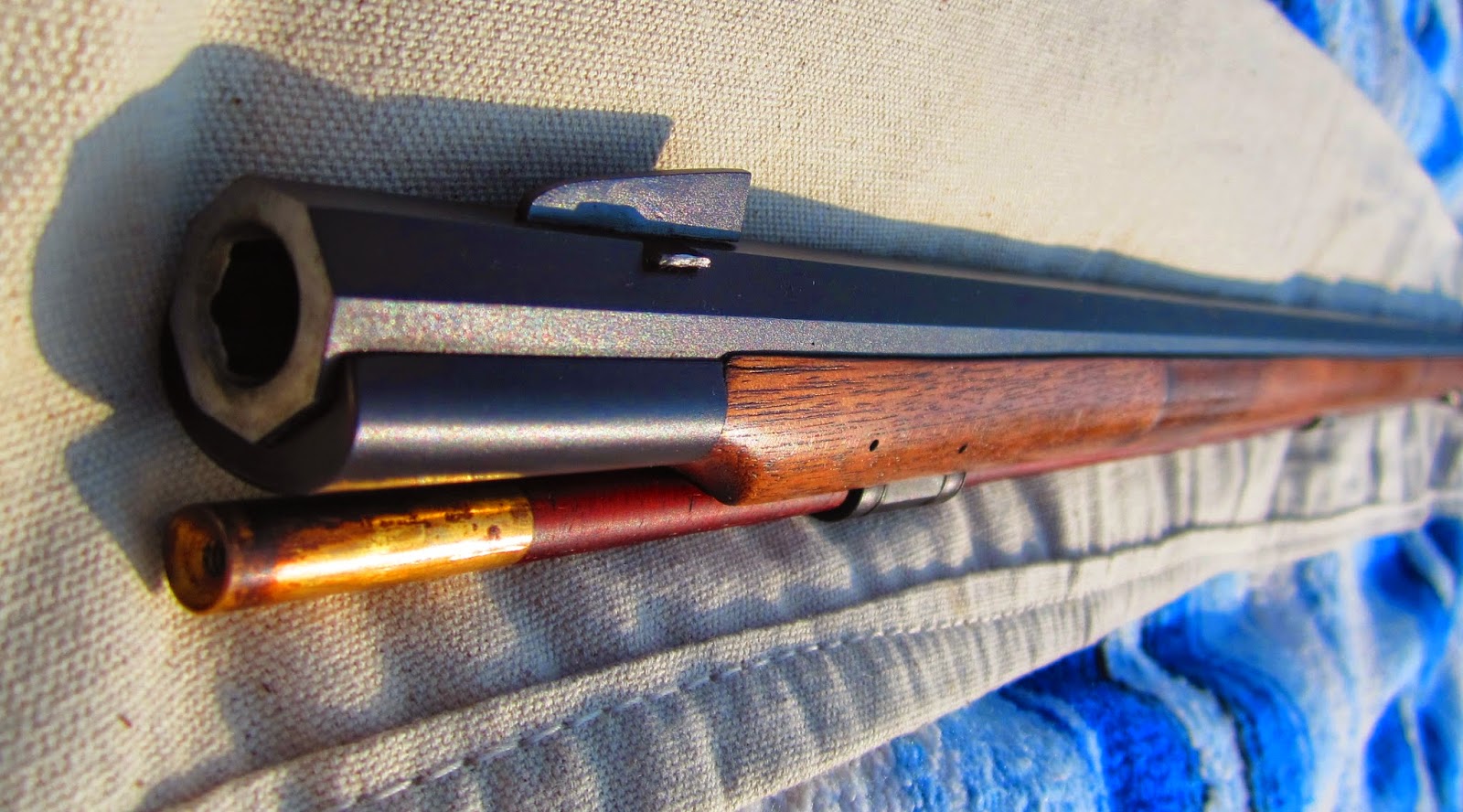 The barrel is 42 inches long and the bore is .45 caliber.  I chose .45 because it is a middle of the road size small enough for accurate target shooting and big enough for whitetail deer if I ever get the urge to put some meat on the table.  The barrel is 13/16" across the flats.  .45 is the largest caliber made from this size blank so while it looks cumbersome and heavy the rifle is surprisingly light and shoulders like a dream.

Another feature of the barrel I've come to appreciate greatly is round bottom rifling.  This type of rifling is another throwback to older times.  It works perfect for muzzle loaders by making it easier to clean the grooves of dirty carbon and powder residue after a shooting session using authentic black powder.  All modern guns have sharp cornered grooves but this is not that big of problem with cleaner burning smokeless propellants in use today. 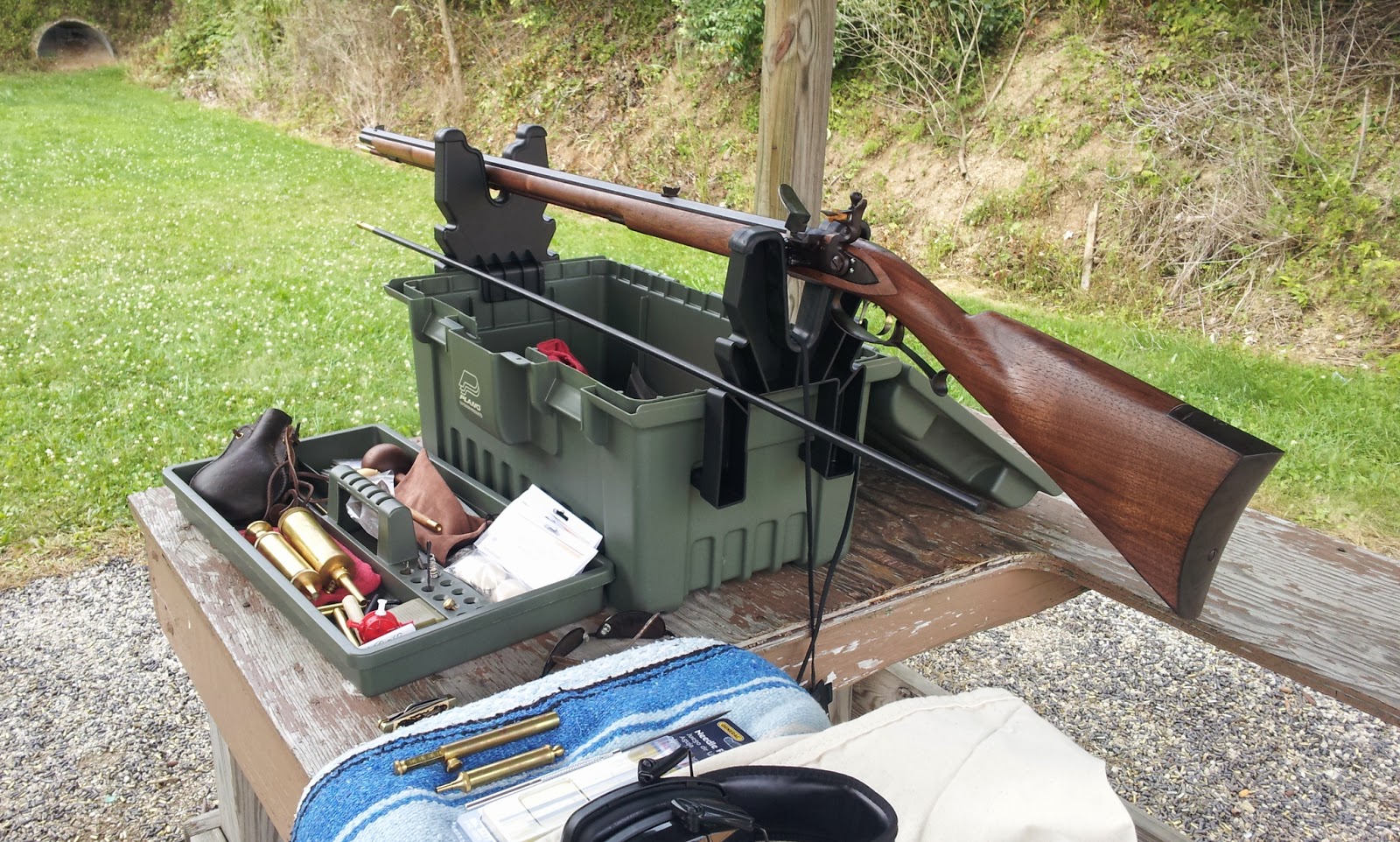 The first Saturday after I received the rifle I headed to the range with great expectations.  The only thing I had do in preparation besides a quick swab of the bore was open up the groove slightly in the rear sight. 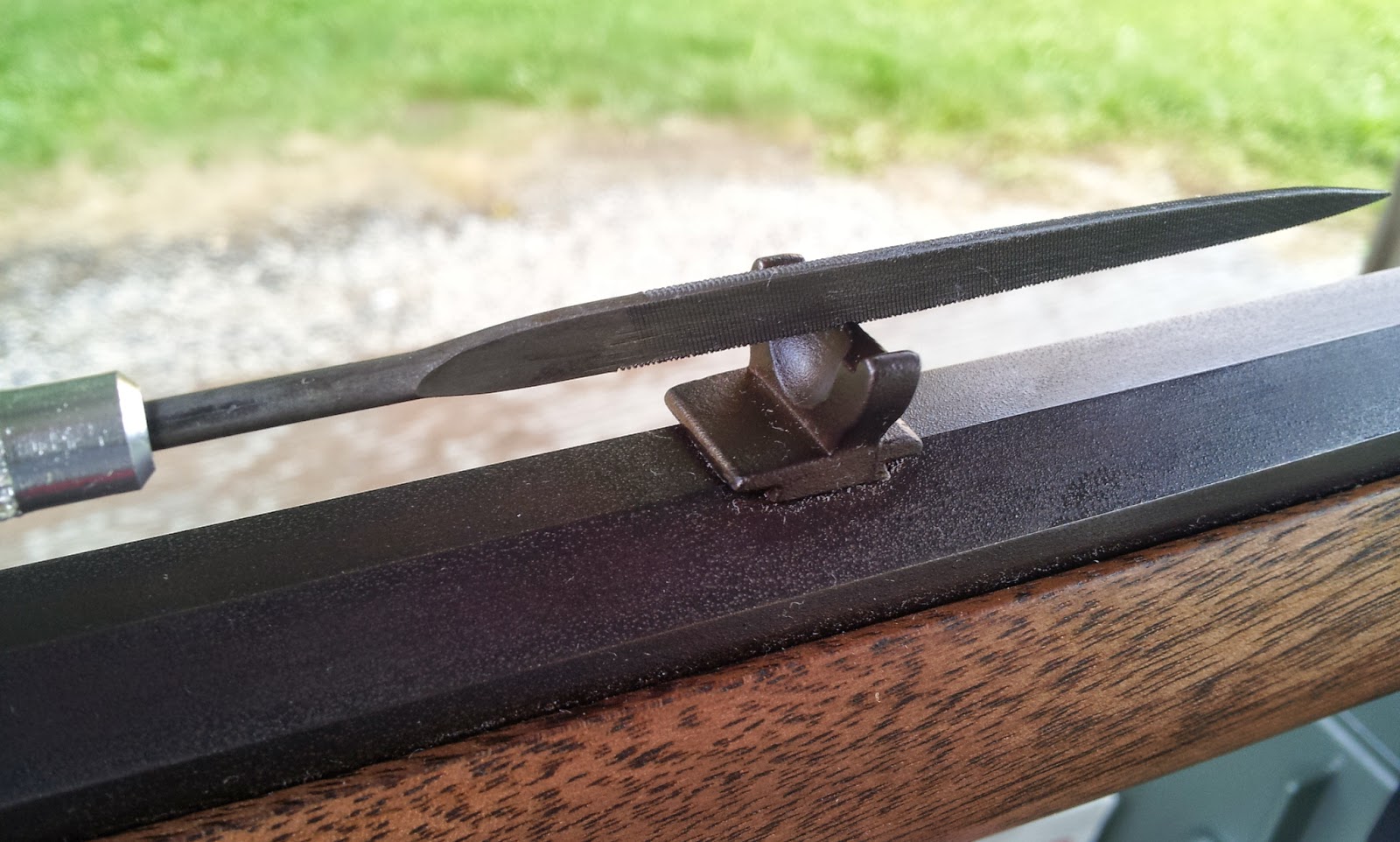 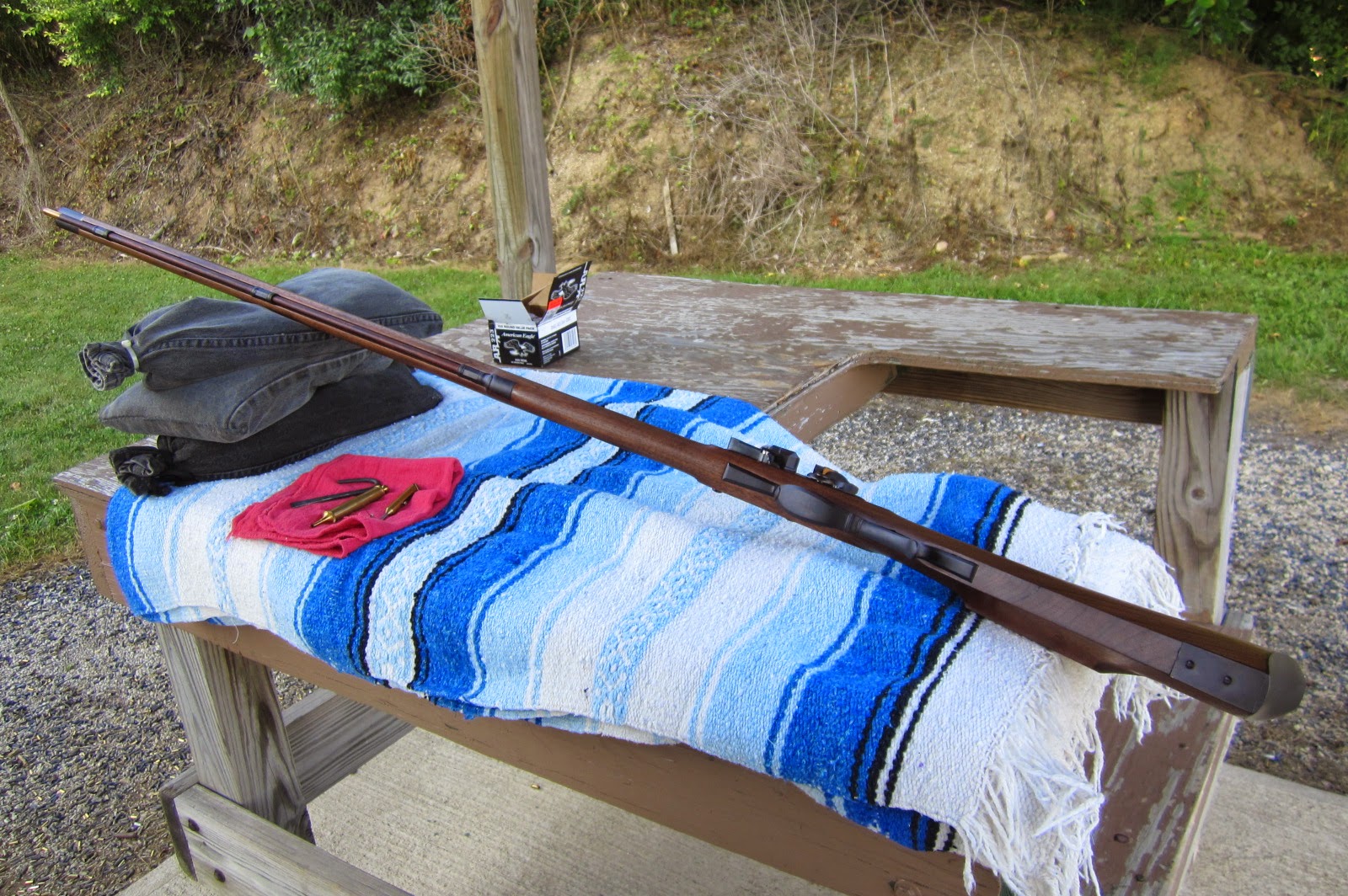 Did I mention the Iron Pennsylvania is long gun? Overall length is 57-1/2" or nearly 5 feet long!  The 13-1/2" length of pull puts the trigger in perfect reach when shouldered and with my off hand support arm locked against my torso the barrel holds rock steady and the long sight radius is amazing.

Here's a good side profile shot captured by the Road Queen that shows how long the gun really is: 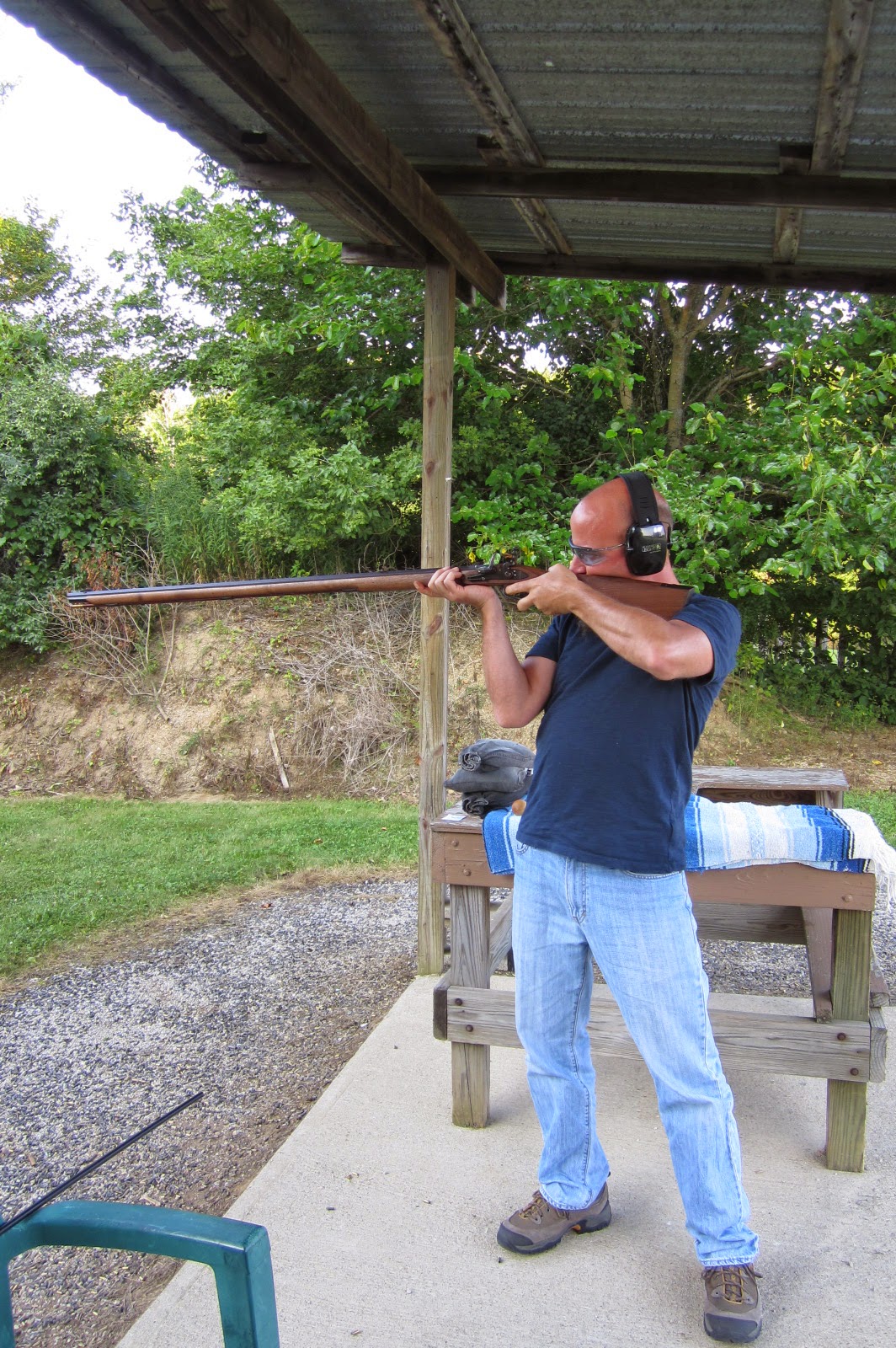 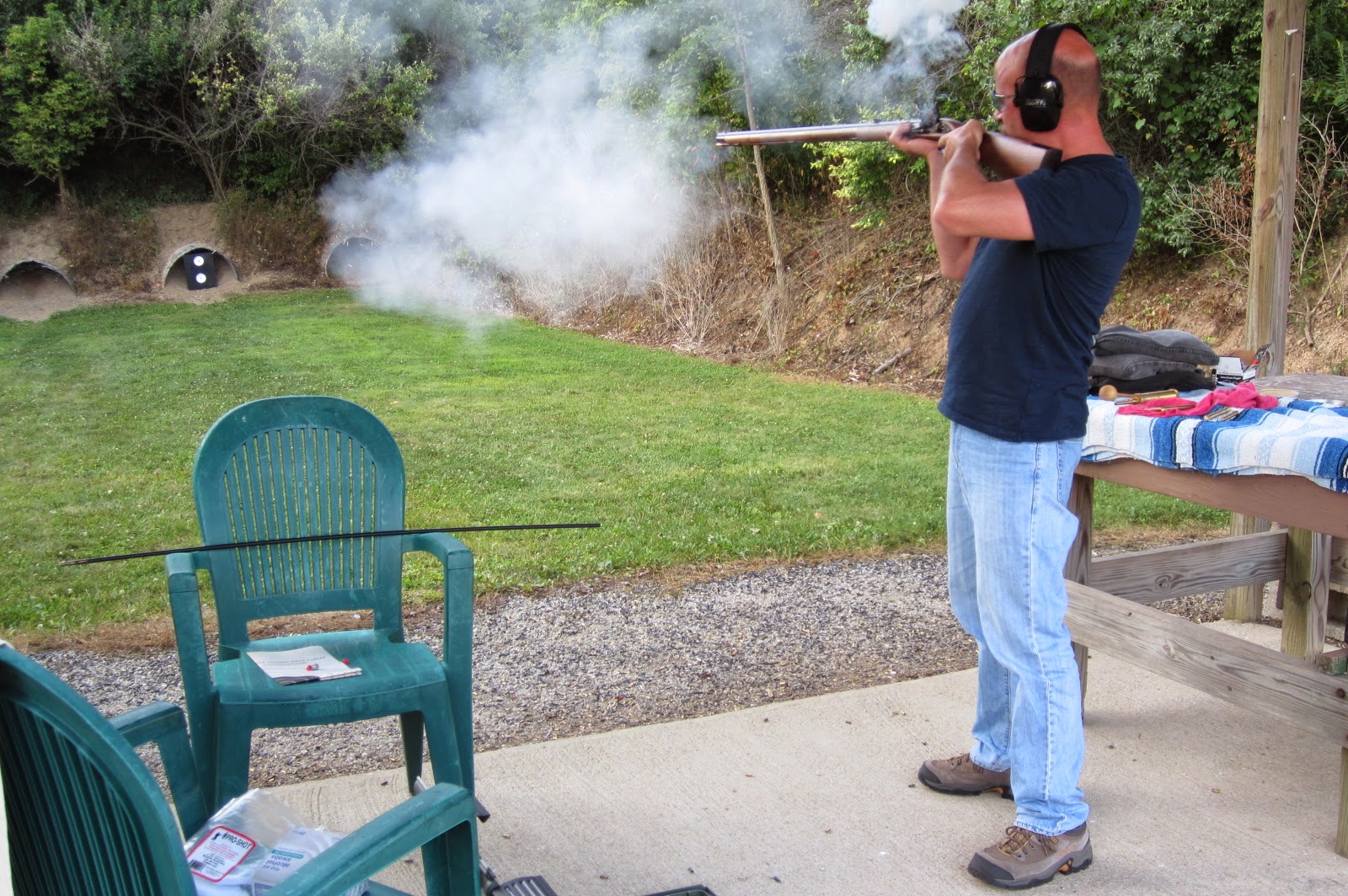 What a blast!  Firing the flint lock is unlike any shooting I've ever done. It also is some of the most fun I've ever had playing with guns and I've played with a few.  The biggest thing to get used to is the bright flash and smoke that erupts from the pan when the hammer falls.  My first few shots I was blinking my eyes instinctively but soon I was keeping my eye riveted on the front sight blade and began to see the yellow flash. 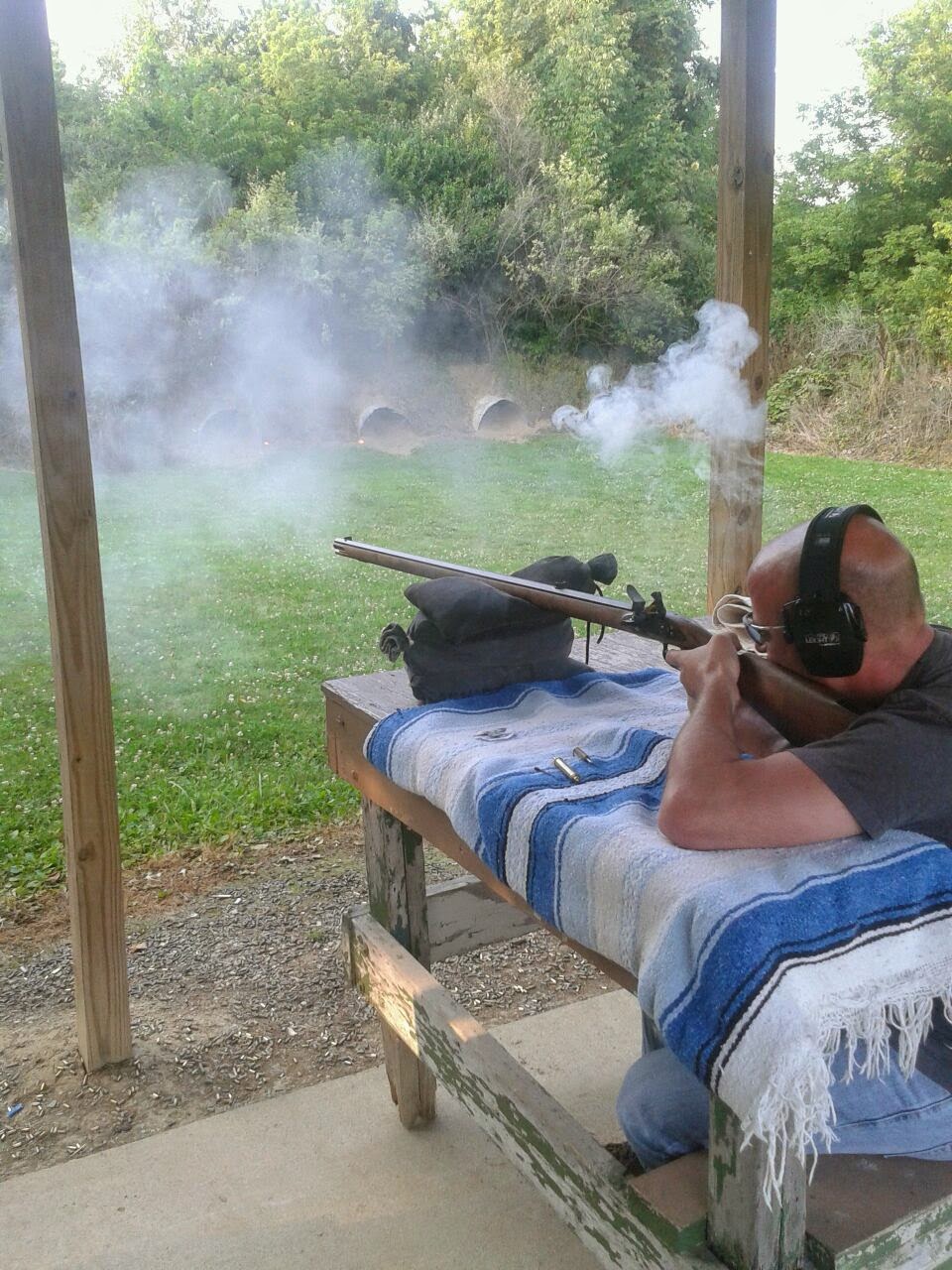 I love the challenge that shooting the flintlock presents.  There is a very slight delay between the flash and the bang and recoil when the main charge ignites.  A rifleman must put considerable effort into concentrating on the front sight throughout the firing sequence keeping the rifle on target and ignoring the flash and smoke from the pan.

I've been shooting muzzle loaders for a long time so loading and handling procedures are very familiar.  I used that experience getting reading for my first shot with the new rifle.  Standing at 25 yards from my target and after setting the trigger I slowly squeezed off the shot: 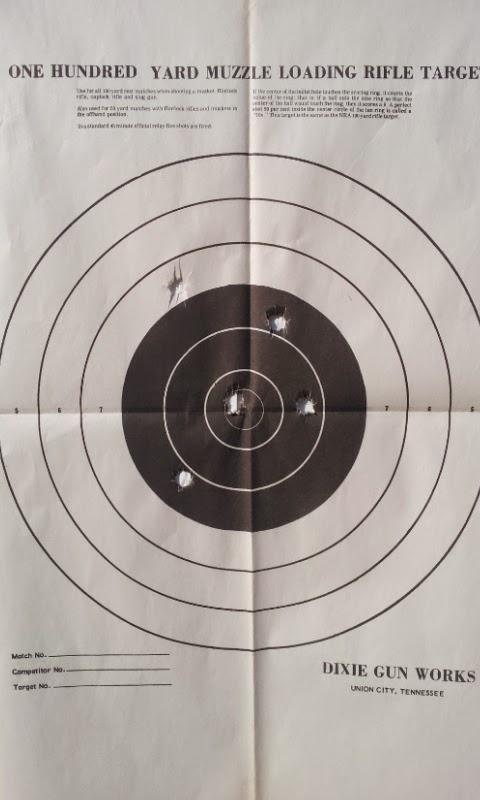 The above target I shot from a sandbag rest at a target posted 50 yards out.  The middle black region of the target (8-ring, 9-ring and bulls eye) forms a six inch circle. 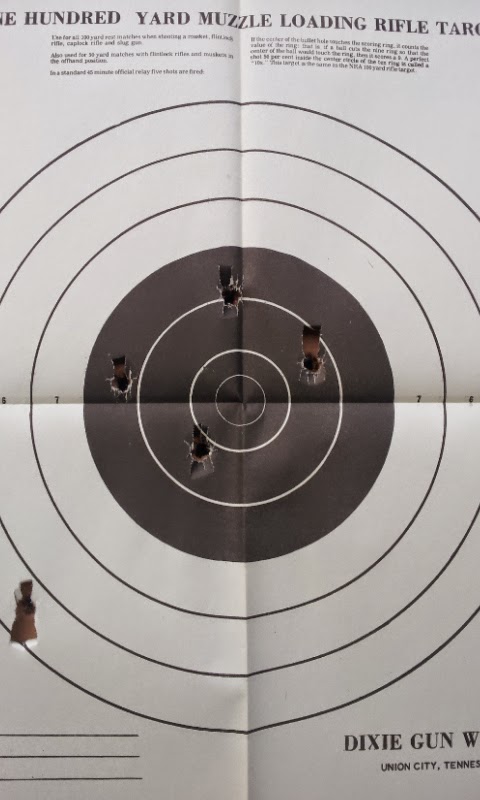 This target I shot standing offhand with the target also posted at 50 yards.  At least for me the accuracy is similar between offhand and bench rest.  While I'd like to claim this is due to my excellent marksmanship skills I think the credit really belongs to the rifle and the huge sight radius afforded by that long barrel. 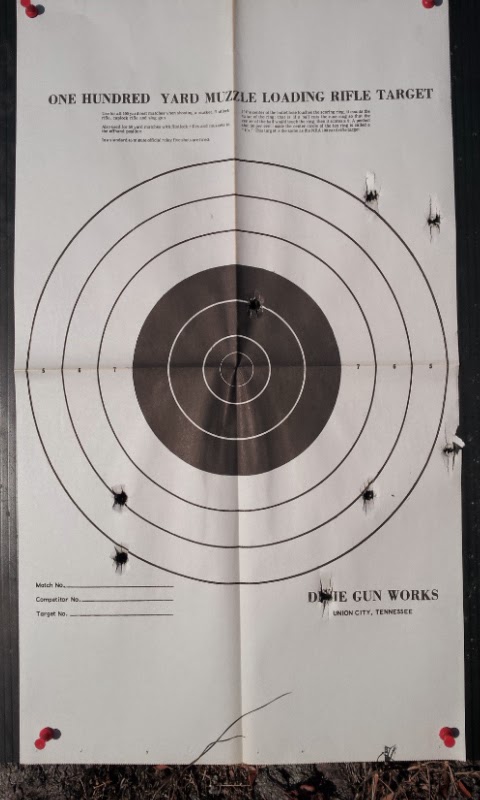 One day I took a trip to the club and set up on the 100 yard range.  With the stock resting on sandbags the front sight completely covers the six inch bulls eye of the target.  It looks like quite a spread but in reality that six inch bull is just a speck when viewed down range.  That I managed to keep all eight rounds I fired on the paper 100 yards away with iron sights and that big flash going off inches from my face I'm pretty impressed.  With some more practice and experimentation with loads and patches I think I can shrink that group down. 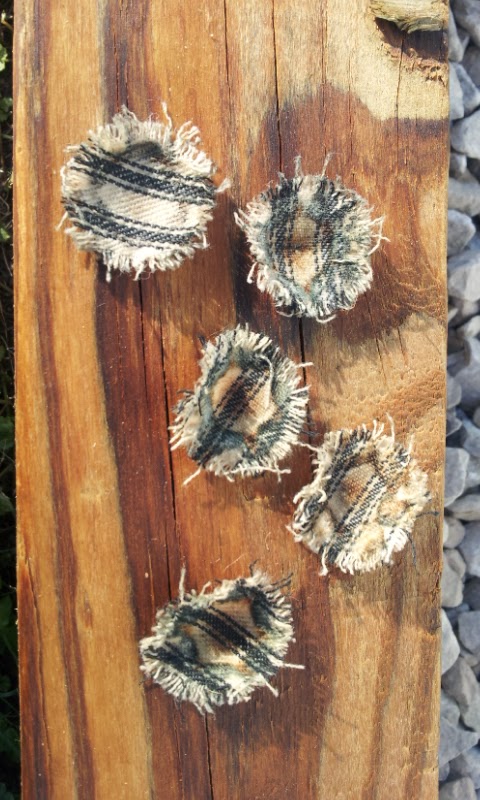 Patches for round ball shooting come in various thicknesses.  To check performance of a chosen patch and load inspecting shot patches is a good idea.  The patches can be found about 20 feet out from the muzzle laying on the ground.  A patch that is too thin may have burn holes or blown to bits altogether.  The job of the patch is to create a gas seal between the ball and the lands and grooves of the rifle's bore.  The patch also has to grip the rifling securely so as to induce a spin to the projectile as it travels down the bore.  If a patch is too thin it could tear out and not follow the rifling's grooves resulting in poor accuracy.

I tried patches of several different thicknesses and indeed the thinner ones did have holes and burnout even though accuracy was good.  Ultimately I settled on .018" thick pillow ticking patch material which are shown above.  They show just a slight charring in the shape of the bore. 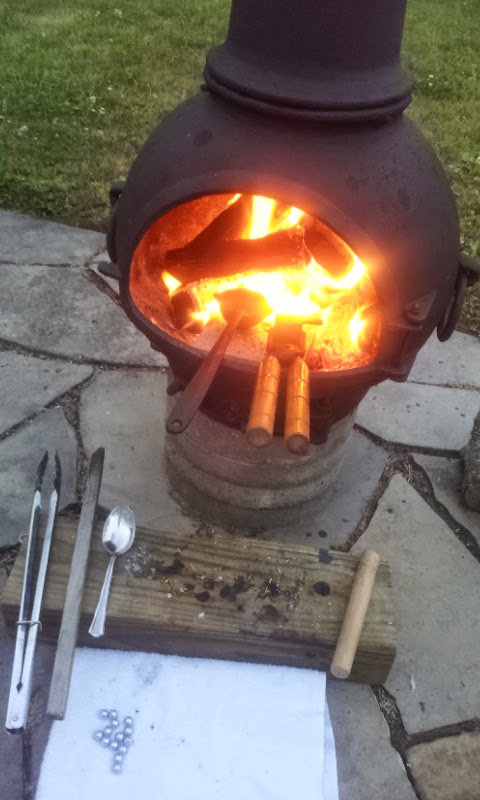 Of course every round fired I cast by hand in my backyard crucible.

My son accompanied me to the range a few times and tried his hand at the Iron Pennsylvania.  In his usual style he's a dead eye and was very impressed.  Interestingly he told me this fall they were studying the American Revolution in history class at school.  I was so happy I could give him the opportunity to bear an arm like those used by citizen patriots over two hundred years ago when forging out a new nation.  I'm sure it added some color to his studies that one just can't get from a book.