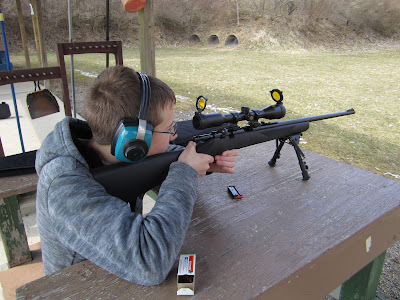 My son and I finally made it out for our first range day of 2013.  It was a crisp day but the temperature climbed to just over 50 degrees F so at least we could venture out without gloves.  I was off work today and my son is on spring break so we took advantage and had a great day shooting our Marlin .22 rimfire bolt actions.

Over the winter Wyatt mounted a fixed 4 power scope on his model 925R.  I first blogged about this great .22 bolt action here.  Today was his first time out with the scoped rifle so we set up on the short range and he made a few shots to see where the point of aim was hitting.

Back in the winter after mounting the scope we bore sighted the gun in the basement against a lighted target pinned up against the far wall.  Bore sighting is a handy technique I like to use to set up a rifle scope. By removing the bolt from the action it is possible to sight directly down the bore of the barrel to the target down range.  With the rifle held fast in a steady rest the cross hairs of the telescopic sight can then be adjusted to the bullseye which was aligned and centered as close as possible by eye while looking down the bore. 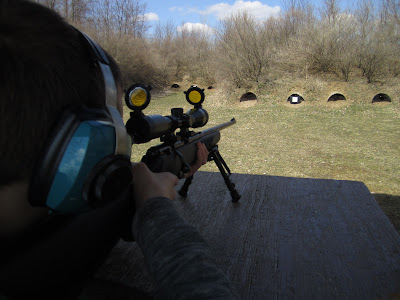 Bore sighting a rifle works great and Wyatt was on the paper with his first shots.  His groupings were centered nicely and only a couple inches high so a few clicks down and he was hitting them in the 10-ring.

Next we headed down to the 100 meter rifle range to test our mettle.  Most plinking and target shooting with .22 rimfire takes place at short ranges but .22s are very capable at longer distances.  My son is like me and he won't hesitate at a challenge. 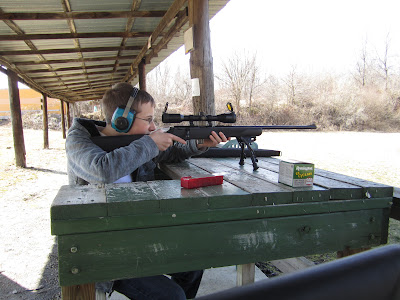 I brought along my Marlin Model 982VS chambered in .22 Winchester Magnum.  This rifle was my first bolt action and I've owned it a couple years.  I outfitted it with a 6-18X 40mm tactical scope with calibrated turrets for my specific cartridge.  When I am shooting I can see the bullet hole appear in the paper a second or two after the report.  Very cool! 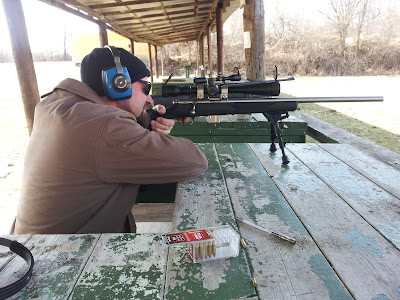 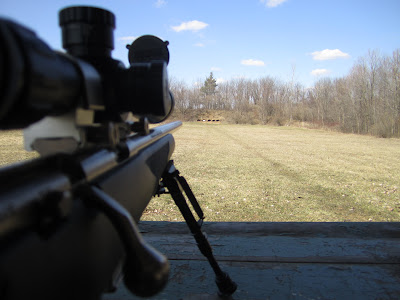 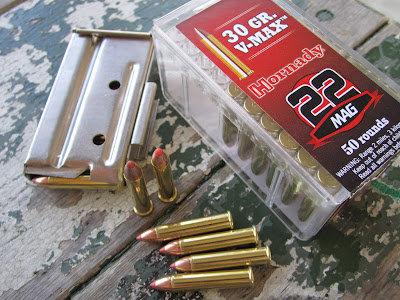 Today I tested out a new ammo I have been eager to try.  The Hornady V-Max sports a ballistic tip 30 grain copper jacketed bullet that leaves the barrel at 2200 feet per second.  At 100 yards the projectile has slowed to 1421 fps and at 200 yards the bullet is still zipping along at 1002 fps. 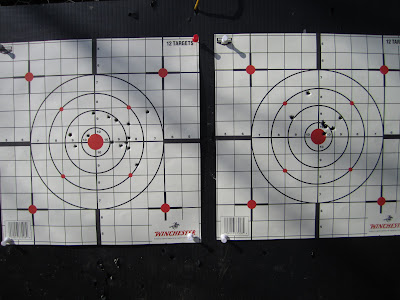 Here's our best shooting. Wyatt's is the target on the left and mine is on the right.  I have to say Wyatt does pretty well as a 12 year old marksman with .22 long rifle and a 4X scope. 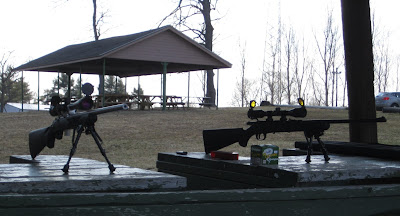 It's been said many times and I don't mind repeating it here:  Take a kid shooting.  It's good wholesome fun!