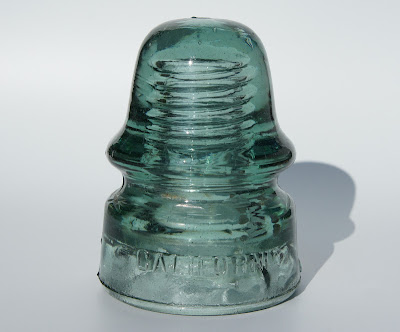 Earlier this week I snapped a few photos of my new insulators from the 2012 Mid-Ohio show over my lunch hour to take advantage of the mid day sun.  In this first shot is a standard CD 161 signal of which I already have a couple of in this pretty sage color.  What caught my eye was a series of dimples or depressions in the glass along the bottom inside edge of the skirt.  While this anomaly doesn't add any value to the piece it is an interesting flaw that I've never seen in California glass before.
﻿ 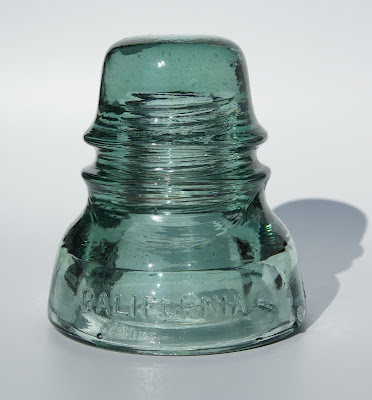 CD 152  I've got a few of these in light smokey purple but didn't have a green one so when I spotted this extra shiny sage example I had to have it.  Some insulators really display a super glossy wet-looking surface. These are my favorites.
﻿ 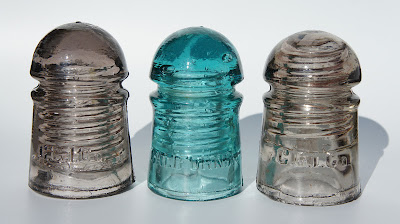 Next we have a trio of CD 102 ponies (a nickname these little guys have had ever since the beginning of their use in the late 1800's). I like the ponies with their compact size and rounded domes.  The two smokey ones on each side have the original CGICo emboss while the aqua pony in the middle has the full CALIFORNIA emboss.  The middle insulator is likely a later production made after the company's restructuring in 1914.  Ponies were used for telegraph and open wire telephone circuits or "tolls"
I normally don't like to buy insulators with damage but California ponies in this pretty aqua blue color are relatively rare so in this case I made an exception.  It looks super in the photograph but around the back side there is a fingernail size chip out of the base and a crack running up the skirt about an inch.  The collector from whom I purchased the piece said I will probably have it for while before finding a flawless upgrade.  The damage is not visible from the front so I can live with it.  I think I paid $15 for the insulator.  A near perfect example would fetch between $75 -$100 on the collector market.
﻿ 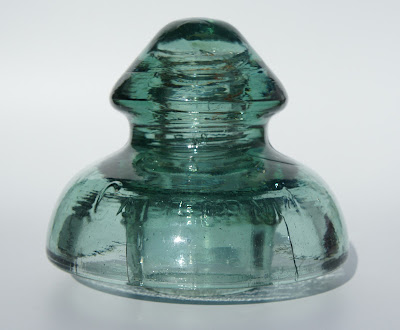 Last but certainly not least is this awesome CD 178 "Santa Ana"  The Santa Ana is a high voltage distribution line insulator with some unique history behind it.
In an article in Crown Jewels Of The Wire CD178 collector Jim Sinsley speculates on the origins of these power pieces:
"it is interesting to note that the name was probably determined by the style's first use in a project for power distribution, about 1893, along the Santa Ana River Valley in Southern California to Redlands. They were designed to carry 5,000 volts, but were not abandoned when the line was upgraded to 10,000 volts in 1896.* I suspect, although there is no real proof that I know of, that the project was large enough that more than one manufacturer was used simultaneously to supply the first project. I believe that HEMINGRAY was among the first producers of the style and perhaps one or more of the Elmer companies also. I am confident that the style was popular enough and marketed for a long enough period of time that several companies got into the act. The original project in the river valley would have been completed before the California company was in existence. There have been a large number of CaliforniA and non-California pieces found in the San Joaquin Valley in California and others in the Mid-West. "
﻿ 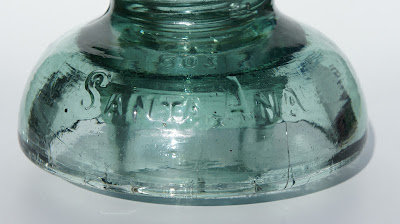 Front emboss:  CALIFORNIA
Rear emboss:  303 over SANTA ANA
The Santa Ana is one of a few CD numbers not represented in my California collection so I was happy to have found this one and for a fair price.
--
Today the majority of antique glass insulators are "hunted" by attending shows or perusing sale lists online.  It wasn't always this way. The hobby can probably be attributed to linemen who in the course of changing out or dismantling lines would keep the pretty colored ones they found on the job.
The interest in the glass objects also germinated with boys over long summers as they scoured railroad lines as far as their legs and bicycles could take them in search of the glowing prize.  In the couple decades after the 1950's many abandoned lines still stood with the occasional glass dating from the early 1900's or even earlier just waiting to be picked.  Here's a great account of collecting in the early days of the hobby by Joe Maurath, Jr of Brockton, Mass: vintagestreetlights.com I could not link directly to Joe's notes on the subject of insulators but it's easy enough to access by clicking the link titled "insulator collecting" under the About Joe header to the left of the home page.  It's worth a read.
﻿
Posted by recumbent conspiracy theorist at 12:06 PM