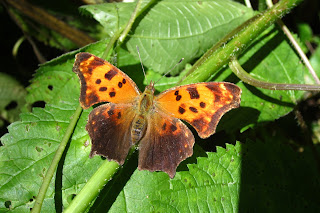 The recent heat wave and rain has got the insect population thriving but this weekend conditions were mild and cool.  Generally in the heat of summer I avoid the deep woods with the annoying constant attack of mosquitoes and biting deer flies but when the weather cools it's always a treat to get out and enjoy the forest.  Taking advantage of this opportunity for adventure we strapped on our hiking boots and headed out. 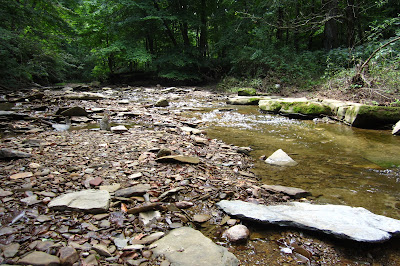 Spangler Park is a 320 acre city park located about five miles west of Wooster, Ohio in the hills of Wayne County.  A walking trail network winds around steep ravines draining into a creek called Rathburn Run.  Crumbling Ohio shale is visible many places from the trail. 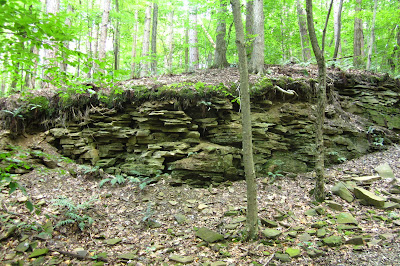 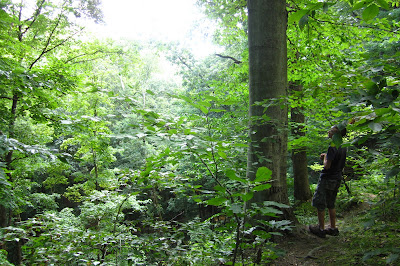 I always love hiking in a new place I've never been before.  The fun is wondering what sight lies just around the next bend or over the next rise.  As is the case with many parks and natural areas we have visited Spangler Park was teeming with animal and plant life and even some interesting fungus.  We had several encounters with whitetail deer and their little fawns at home in the forest. 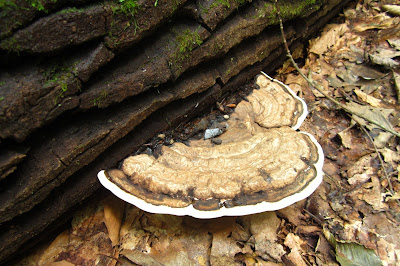 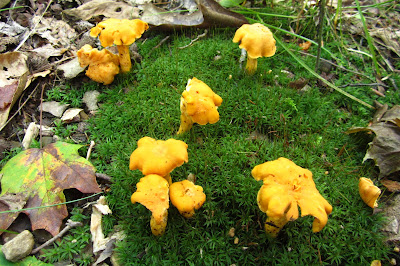 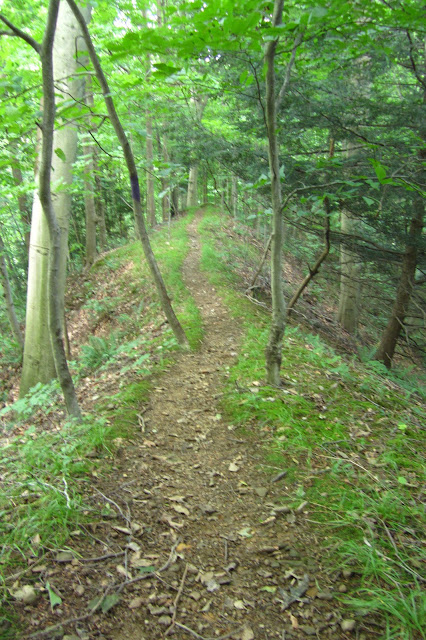 At one point my son's sharp eye caught sight of some debris caught amid a rocky cut winding down a nearby hillside.  Countless years of runoff had eroded away the soil creating steep sided ravine filled with rocks and small boulders.  As we carefully climbed up the drainage we found all sorts of broken glass, pottery and a few rusty pieces of metal wedged among the rocks.

In the previous century in rural America it was common practice for a homestead to create a dumping area in an out of the way corner of the property to dispose of no longer needed items.  In times past most people were much more thrifty than they are today and commonly saved and reused all sorts of household goods.  But even in lean times human activity still creates refuse and this is what we discovered; someones old trash pile.

In flatter areas these refuse piles can remain undisturbed in a quiet corner of a woodlot and all kinds of interesting things can be found.  Unfortunately the steep hillside and churning action of the rocks had broken up most of the bottles we saw but we did find a few unbroken examples of old brown glass Clorox bleach bottles, clear perfume bottles, small ornate white glass makeup containers  and porcelain Mason jar lid inserts.

Some non-glass items we found included an early electric clothes iron and old boot heels and shoe leather.  Just everyday items cast off as junk by a family long ago.  An interesting little window back in time.  My son is big into television shows like American Pickers and Pawnstars so he is interested in antiques and old fashioned things.  He had a great time digging through this old stuff.

The only piece I carried away was this little porcelain and glazed insulator.  It was part of a gang of three attached to a rusty iron bracket.  One of the three was missing and the second had some chips in the glazing so I left it behind keeping only the best one to put on display in my outdoor insulator collection. 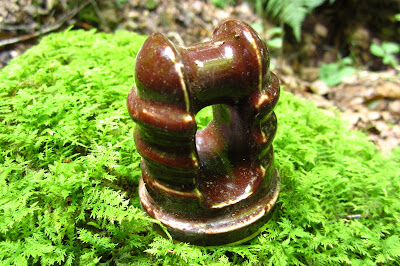 As we neared the end of our hike we came upon a roped off area.  Investigating further we found this abandoned well. It was covered with a metal wire grate to prevent someone falling In. 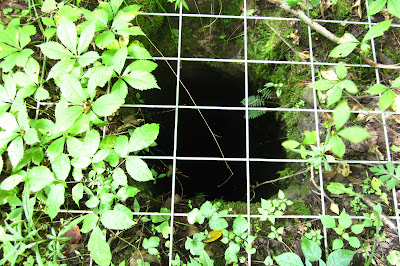 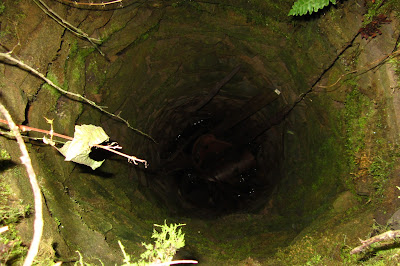 Posted by recumbent conspiracy theorist at 7:44 AM