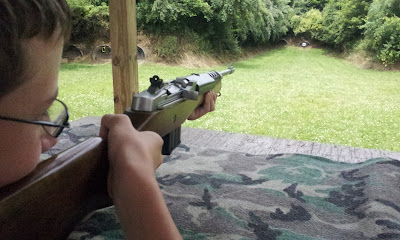 My son has been wanting to shoot the Ruger Mini-14 Ranch Rifle in .223 caliber for a while and he has been asking lately with increasing frequency.  After lunch today I quietly gathered up our shooting gear and told him to get his shoes on and get in the car.  I thought I would surprise him with a trip to the range and besides its been many years since I've put any lead down the barrel of this handy little carbine.    I've been a Ruger fan ever since my dad took me shooting when I was young lad so it was natural that I would end up with the Mini-14 when it came time for me to own a center fire carbine.  In the gun world the AR-15 platform is all the rage and has been for a while now.  While it is a very good system the AR rifles just don't don't appeal to my eye and sense of style.  As a history buff and a gun guy I can appreciate the design of the Mini-14 directly taken from the military M1 Garand rotating bolt gas operated action.  Like the later M14 military rifle the Mini-14 feeds from a magazine loaded from the bottom instead of the top loaded stripper clip system of the earlier M1.  In fact that is how the little carbine got its name; It is really a scaled down M14. 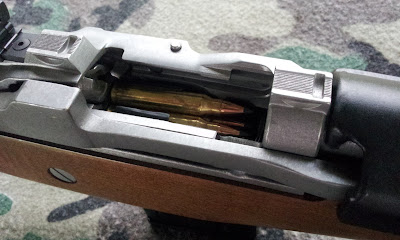 After a quick stop at the local gun shop for some ammo we headed to the sportsman's club and set up on the  40 meter range.  This trip was Wyatt's first time shooting a full power center fire weapon and he was loving it.  The bang from the Ruger is quite loud but the recoil from the .223 cartridge is very manageable and he shot well. 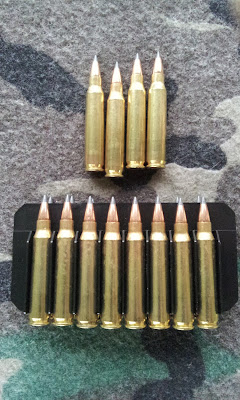 As well as trying out some new ammunition this was also an opportunity to test out a couple 10 round magazines that I picked up a while back.  The Mini-14 comes with a 5 round mag that fits flush with the bottom of the stock and is ideal for hunting situations but when out punching paper I like to shoot 10 shot strings.  In all we shot about 70 rounds and feed and function was flawless with two brands of ammo.  I had some older Remmington soft point 55 grain loads that Wyatt burned up first.  The new stuff pictured above was American Eagle brand 50 grain with a poly tip designed for varmint hunting. 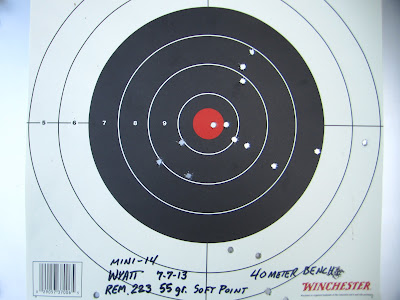 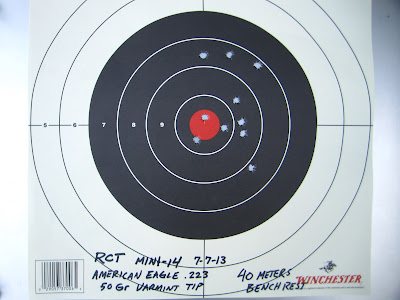 The Mini-14 is not a tack driver; It wasn't designed to be, but instead a handy and lightweight carbine and I am happy with its performance as such.  It's a fun little shooter and very satisfying to stand to the side and watch the open bolt work back and forth as it cycled the rounds.  40 meters steps out to about 133 feet and sighting with a ghost ring and front blade iron sights I'm pleased to keep ten rounds inside the 8-ring.