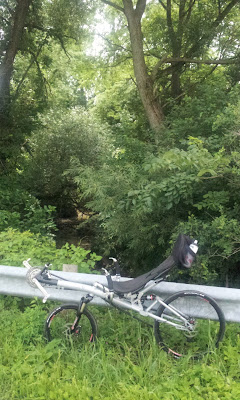 The month long spell of rainy days finally gave way a couple weeks ago and allowed me to spend some quality time with my bicycles.  Some would contest that the brutal heat wave that followed quick after the rains was reason enough to stay hidden inside in air conditioned comfort.  Not me I like the heat and while the first ride in ninety degree high humidity conditions left me feeling a bit sluggish I quickly acclimated.  Also those that ride bikes know that even in the hottest weather as long as you keep moving and create a breeze it's not that bad.

A few weeks ago my Canon PowerShot finally broke down after one too many crashes to the ground.  In the interim before I got a new camera I was making due with my cell phone camera.  The pictures are grainy but better than no pictures I guess.  Look for the quality of the photography to be back to its normal quality soon.

I took the opening shot of my recumbent just outside of town.  I live in a small community that is only three miles across so my idea of an "urban ride" may be completely different from bikers living in areas of larger population density.  For me pretty much any ride over five miles is going to involve some country scenery.


On July 14th I rode the Clear Fork Loop on my Motobecane road bike for the first time this summer.  The CFL is one of my favorite local rides and I've written about it many times and took some great pictures along the way through the years. I decided to assign a label link to bring all my posts about this loop together.  The label is at the bottom of this post.

Last week I took off one night after work for a ride on the road bike and did an extended version of a route I call the Candlewood Lake Loop.  This 34 mile loop covers roads in various states of disrepair in 3 different counties.  It had been a while since I rode the extended section which passes along a road long since closed to through traffic.  An old iron bridge spanning a small creek was deemed unsafe at some point before I ever discovered it.  Because of the lack of residences along the rural road the county just closed it rather than spend the money to maintain the little travelled passage.  In previous years the roadway was clear and I could simply lift my bike over the barricades and go on my way. 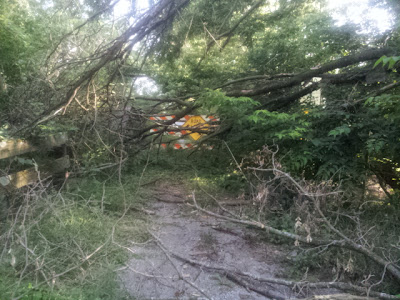 This time I found downed trees making the way almost impassible.  The temperature was about 96 degrees F and very humid.  As soon as I stopped to snap a picture the sweat instantly began to flow and was stinging my eyes.  To make matters worse hordes of mosquitoes were soon closing on my position from the woods along each side of the abandoned road. 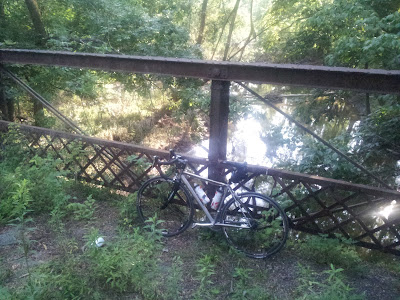 In a hurry I threaded myself and my bike through the tangle of branches and trunks and got back underway as quickly as possible. 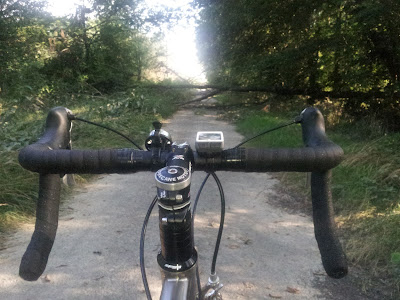 Here is a shot of Candlewood Lake from the west end.  Built in the early 1970's Candlewood Lake is a 1500-acre gated community north of Mt. Gilead, Ohio.  A-250 acre stream fed lake is the centerpiece providing scenic views and recreation for the property owners.

During the weekend I got together with the RoadQueen and we did some riding.  Friday we went for a short out and back spin to visit a nearby one-room schoolhouse.  For this ride I used my recumbent bike.  When I'm getting in lots of riding one of the things I like about the bent is how the riding position is different from my upright bikes.  I like to alternate between the two styles of bikes and the slightly different muscle groups utilized for each bike varies the workout and makes me a better cyclist overall. Besides sometimes it's just nice to get away from the wedgie seat.

After the back to back rides Thursday and Friday I had 54 miles in and was feeling a little fatigued so we took a rest day on Saturday and just relaxed around the house.  The RoadQueen just started pedaling bikes earlier in the spring and she is developing well.  She said she has been itching to break over the 14 mph average on her Giant hybrid.  We decided to ride on the B & O rail trail and I figured that would be an ideal place to see if we could nudge her overall speed up a bit.  Not only did she cover the entire trail end to end and back but she posted her highest average speed well above 14 mph. Way to go RoadQueen!

Last night I used the map on my smart phone to discover a new loop that took me to the northwest into the countryside of Crawford County.  This route travels some smooth and picturesque rural roads with a few rolling hills along the northern leg where the road parallels the Sandusky River.  I found some unique stuff along the way on a couple roads I have not ridden before.  Another old one-room schoolhouse and an Ohio historical site marker makes a great excuse to do the ride again and this time with my camera.  I forgot my memory card at work so unfortunately I didn't have a camera and I'm done messing with the cell phone camera.

Quite a bit of riding lately and I've been feeling great because of it.  The recumbent is comfortable and functioning flawlessly as always and I'm digging the Rubino Pro slicks on the roadbike for sure.  Those new tires have really made me excited to get out and hammer away on the Motobecane.

The incessant rain fall earlier in the season has my overall mileage for the year down but I'm quickly making up for it.  Last night's ride was really nice and I look forward to heading out on that route again soon.  At 26 miles it's the perfect distance for an after work ride.


Posted by recumbent conspiracy theorist at 6:43 AM