Amateur Satellites
I've heard about amateur satellites orbiting the Earth and read stories of hams out in their backyards waving antennas around scaring the neighbors.  Sounds like fun to me.  Curiosity about this interesting segment of amateur radio finally spurred me into action.  I did a bit of research about an amateur satellite "Arissat-1" launched earlier this year from the International Space Station.

At first glance one would expect elaborate equipment with specialized antennas and knowledge to be required to receive telemetry from a satellite in space.  This is not the case at all.  After I dug out my 2 meter FM transceiver and charged up it's dead batteries I now held in my hand a tiny satellite receiving station.  A programmable police scanner could also be used to tune in the satellites.
--
Finding the signals

On the Internet I found a wealth of information at the Arissat-1 website.  Most useful was a Pass Prediction Application where I entered my location (grid square) and the satellite I was looking for. The program calculated the times that the next 20 passes would occur over my location allowing me to hear the FM transmissions.  I printed out the page and clipped it to a clipboard for reference outside.

The first pass on my printout happened late in the afternoon while I was still at work.  I had just picked up Wyatt from school so he was standing by also.  I set the frequency on my little 2 meter rig to 145.950 MHz and opened the squelch control so I could hear the static as I had no real idea what I was listening for or how strong the signal would be.  About a minute into the predicted window the static suddenly dropped and a voice became audible getting louder and more clear.  I heard a female voice identifying the source of the transmission as amateur radio satellite Arissat-1 call sign RSO1S.  The next thing we heard was a greeting in one of 15 different languages followed by the telemetry data, technical stuff such as temperatures and battery voltages and current.  The last thing copied before the signal faded out in a rush of Doppler effect was SSTV or slow scan television.  The satellite was transmitting back to Earth a picture from one of it's on board cameras.

Later in the evening we caught the satellite transmissions on it's next few passes spaced about two hours apart.  This was a fun little experiment that required no more than to walk outside and is another first for amateur radio station KD8JHJ.  After using the short and inefficient rubber coil antenna on my hand held I see now that the extra gain from a yagi antenna would be ideal for capturing the fleeting signals of these orbiting space travelers. 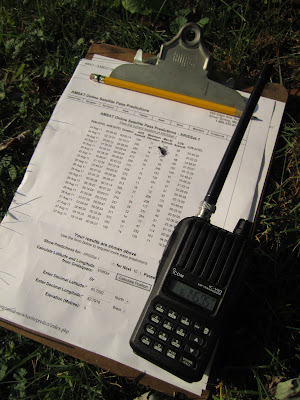 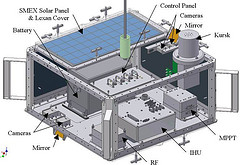 Under the "hardware" tab at the Arissat-1 website is lots of interesting information such as a Design Review that one doesn't have to be a rocket scientist to understand.  The points of the review are arranged into well constructed pdf documents.  It is truly amazing the amount of effort put into this project by dedicated hams and a great example of one of the many activities that fall under the subject of amateur radio.  One of the coolest hobbies on Earth and beyond.
Posted by recumbent conspiracy theorist at 6:23 AM