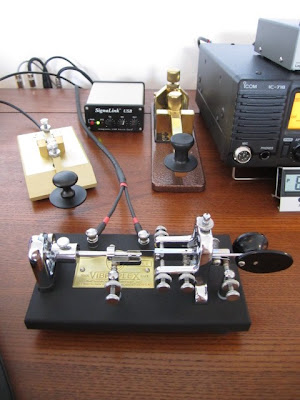 This weekend fans of manually generated Morse Code radio-telegraphy gathered on the high frequency bands to participate in the SKCC Week End Sprint.  I managed to log a few hours in my new and improved operating position and had a good time making contacts on my wireless set.

In other news at W8MDE I've upgraded my station computer to this new Toshiba laptop running Windows 8.  Progress marches on so instead of grumbling and hand wringing I've jumped right in.  The Windows 8 operating system is a bit different but not a big deal.  On the surface it looks and acts more like a touchscreen controlled Android device.  Clicking on the windows start button brings up a "normal" looking screen with a task bar at the bottom and desktop icons reminiscent of previous windows operating systems. 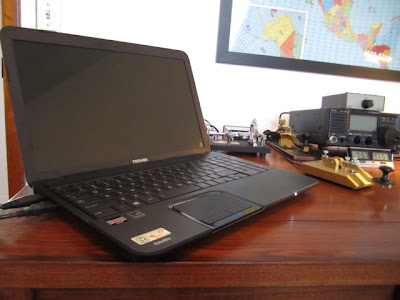 Happily the learning curve is not too bad even for someone like me who is not computer savvy in the least.  I've been trying to get more hands on with my computers and I recently learned how to clean and de-fragment my hard drives.  Wow! computers work a lot better with a little regular maintenance.  My idea of "hands on" technology is a Morse Code key.

Saturday afternoon I downloaded the popular PSK-31 program "digipan" successfully and plugged in my Signalink USB interface completing a hard link between the laptop and my transceiver and in short order was having a PSK-31 conversation with a station in the North of France.  Computers really are getting better and better.  This unit functioned perfectly from the start and didn't give me any static regarding the separate soundcard in the Signalink USB. I didn't have to reconfigure any of the computer's internal soundcard settings to get the digipan software working correctly with the interface and my amateur radio.