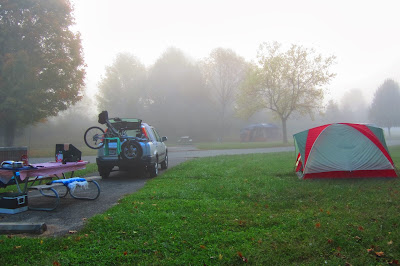 Sunday morning brought a fog that settled on the campground and coated everything with dew.  The air was chilly and damp as I readied my coffee and as it got lighter the bluish cast gave way to golden hues as the sun rose in the east.  One of the things I like about tent camping and spending lots of time outside is experiencing the subtle changes of the sky as day turns to night and the way the light of dawn washes over the landscape chasing away the shadows.  There is some primal connection with nature that mankind lost long ago when we started building shelters and spending more and more time shut away from the natural world around us.  Getting outside for a few days and nights really seems to reconnect that bond.

I took my time with breakfast letting the sun burn off some of the fog.  A cold front was moving into the area and a steady breeze picked up from the north east just as it had Saturday.  I was happy to find I felt fairly well after just riding a good distance the day before.  One of my goals for the weekend was to do two long rides back to back to get a feel of what touring style riding would feel like.  I've done a couple centuries and a few 50 milers but never one after another.  I had the mental benefit knowing for my second day out the first half of my ride would be uphill slightly and into the wind.  I'd be able to run much easier on the return trip. 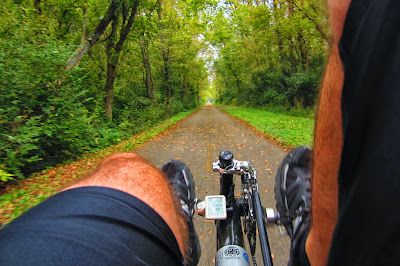 I got started again from my staging area in Corwin and headed north east.  Right away I noticed that the valley widened out and the trail followed much straighter lines.  The false flat effect is really accentuated on these old rail beds.  Just standing there and looking back and forth up and down the trail it seems impossible to perceive the grade but once rolling and moving under pedal power it is obvious. 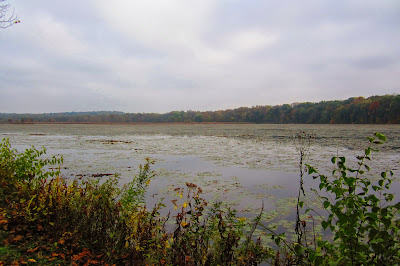 After about five miles the stiffness worked out of my legs and I felt strong.  This encouraged me greatly because I really did want to put in another day on the bike and make my weekend tour a success.  Sure I wasn't setting any speed records and I wanted to make sure I had enough gas to hit my goal of 25 miles before turning around so I tried to moderate my effort and just enjoy the ride and new scenery.  The temperature was at that point where it was almost too chilly with a short sleeve jersey but when I put my windbreaker on I started to heat up a little too much.  Eventually it warmed up enough that I could put the jacket away. 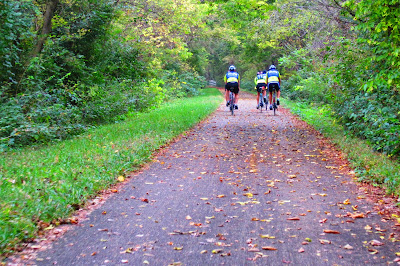 Traffic on the trail was pretty light perhaps due to the fog, clouds and chilly breeze.  Often I would travel quite a while by myself without even seeing another trail user.  I loved the solitude.  It seems the older I get the more I enjoy being alone.  A five man group of roadies or a "Fred Squad" as I like to call them caught up to me somewhere south of Xenia. They were friendly and wished me a good morning as they got on up the road.

While it did seem flatter as I rode north there was no shortage of interesting natural features along the trail. 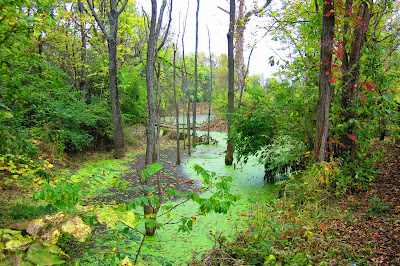 After about an hour I rolled into the county seat of Greene County; Xenia, Ohio.  The name itself is a Greek word which means "hospitality".  If you're visiting Xenia by bike then the name does indeed fit. Five different bike trails radiate out from the town making up the combined 330 mile Miami Valley bike trail network.  I'd say that's bike hospitable. 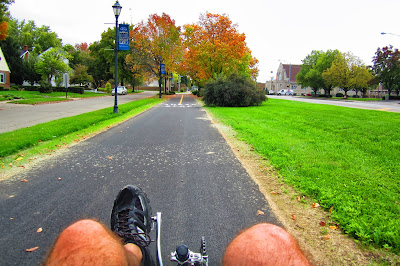 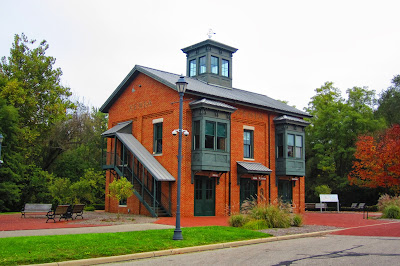 Xenia Station is a unique two story brick building that really stands out from the other depots along the line. 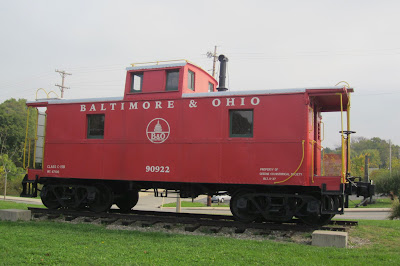 The B & O was one of the six different rail ways that entered into Xenia during the towns early history.

Continuing northward from Xenia Station there is a short couple blocks through the center of town where cyclists have to travel through the downtown area on the street or sidewalks.  It's not a problem in a small town like this and on Sunday when I passed through there was hardly any car traffic anyway.

As I passed by the county courthouse I noticed this big monster positioned out in the green space and of course I had to stop and check it out. 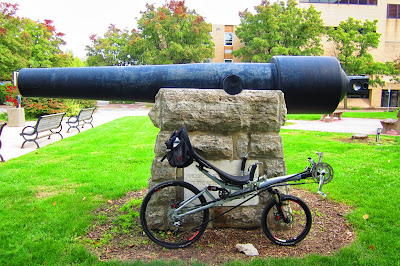 This is a US Civil War artillery piece known as a 6.4" Parrot Rifle  or a 100 pounder as that was the weight of the shell this brute would fire at an effective range of 3,500 yards propelled by a 10 pound charge. Named after its inventor Captain Robert Parker Parrot, a West Point graduate, This piece is one of just over 80 guns still in existence today.  Clearly stamped nomenclature around the muzzle allowed me to learn a bit about where this imposing looking front stuffer came from. 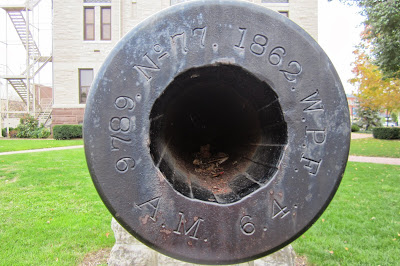 W.P.F. Stands for West Point Foundry.  All the Parrott guns were made at that facility.
1862.  Date of manufacture
No 77.  Registry number.  I tried digging around a little to see if I could use this number to see if the gun saw any combat but have not had any luck so far.
9789.  The weight of the gun in pounds
A.M.   I'm not sure but I think this stands for Army.  Parrot rifles were put into use by both the Army and the Navy.
*Edit:  In a reply email Craig Swain, whose blog I referenced above informed me that the A.M. inscription stands for General Alfred Mordecai, Jr who was the inspector at the time.  Thanks Craig for setting me straight here.
6.4.  designates the bore diameter in inches.  6.4" 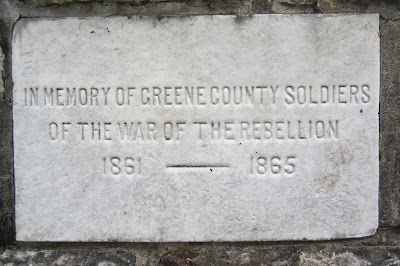 As I've mentioned before on this blog I get such a kick out of discovering things while out on my bicycle which give me a chance later to get online and easily research whatever caught my attention.  As I get out explore more places around my home state I'm finding no shortage of interesting stuff to learn about.

Pressing on up the trail after another hour I crossed the only other big iron bridge I encountered on the LMST and arrived in the town of Yellow Springs. 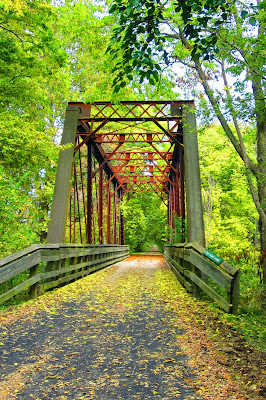 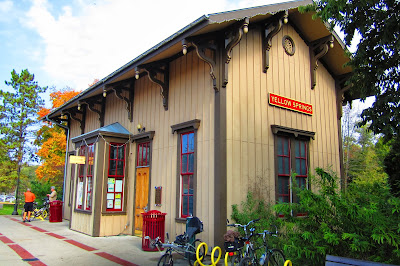 Yellow Springs Station is a replica of the original station.  Still very cool even though not the original building.

Yellow Springs is the home of Antioch College.  Higher education really doesn't interest me but the link does provide some curious facts about this coeducational liberal arts college founded in 1850.  Curiously the 1950's TV series "The Twilight Zone" was created by Antioch alumnus Rod Serling. 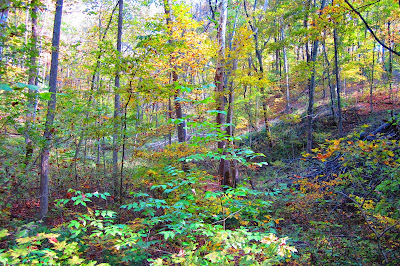 About a half mile north of Yellow Springs my computer registered 25 miles and I was happy to make a U-turn.  I took a break to eat a snack and then began the trip back to Morrow.  The downhill grade and a little extra push from the tail wind felt awesome and I cruised comfortably at speeds up to 16 or 17 mph for the return trip.

I had broke camp earlier in the morning and had all the gear stowed so once I arrived back at the staging area all I had to do was secure the recumbent on the rack, change my clothes and make the drive home.  While I was stopped in various places I met quite a few nice people striking up conversations with riders and non riders alike.  I found folks down in south west Ohio to be very friendly and I can't wait to get back down to explore some more of this amazing trail network.

With the completion of my weekend tour I logged 105 miles in two days impressing myself for sure.  Up until this weekend the most I had ridden this year in a single go was about 40 miles.  I took Monday off from work just to allow a little time for recuperation but honestly I felt like I could have kept on riding another day.  Although my trip got off to a rocky start once the bike riding got underway things shook out for the better as I figured they would.